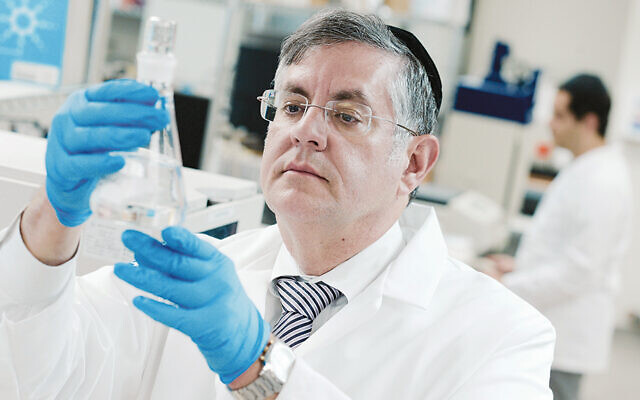 Dr. Zvi Loewy at work in his laboratory at the Touro College of Pharmacy. (Dmitriy Kalinin/Touro)

What’s involved in testing for covid-19?

We’ve all heard about swabs up the nose — ouch! — but what happens then? How are the swabs converted into information about whether a deadly virus is replicating inside a person?

Dr. Zvi Loewy of Fair Lawn knows the answers to these questions. He is the associate dean of research and a professor of pharmaceutical and biomedical sciences at Touro College of Pharmacy in Manhattan. But for five years, beginning 30 years ago — from 1990 to 1995 — he was the head of systems engineering at Roche Diagnostics, and he led the effort that developed a machine that automated the process of molecular testing. Today, the latest incarnations of these machines from Roche Diagnostics are used by laboratories around the world to test for covid. (Roche has installed more than 800 of the current models of the machines around the world, with nearly 150 in the United States, and it is working overtime to increase its manufacturing capacity.)

Dr. Loewy’s educational background “was a hybrid between a mechanical engineer and a molecular biologist,” he said. He earned graduate degrees from Rensselaer Polytechnic Institute and Albert Einstein College of Medicine after getting a bachelor’s degree from Yeshiva College.

“That was the time when molecular diagnostic technologies were starting to be invented,” he said.

The key technology, known as polymerase chain reaction, was invented by Kary Mullis, who was working for a biotechnology company in California. DNA polymerase is a chemical that can build up a double-stranded helix of DNA molecule from a single strand of DNA and an unordered soup of DNA’s components. The idea of the chain reaction behind the chain reaction is the sort of obvious-in-retrospect idea that earns Nobel prizes. (Dr. Mullis earned his, in chemistry, in 1993.) First, split the double strand of DNA into two. (This happens naturally when our cells replicate.) Then, bind each of the broken strands to the various nucleotide base pairs to create a new double helix. (This also happens naturally.) Repeat 30 times, and due to the magic of geometric growth, “from one copy you can generate billions of copies of nucleic acid,” Dr. Loewy said.

There are a few things that make this challenging. For one thing, breaking down the DNA requires a high temperature, above 200 degrees Fahrenheit. That’s more than hot enough to break down the polymerase that occur in human cells — meaning that when scientists were first figuring this out, they had to add new polymerase after every cycle. Luckily for Dr. Mullis, scientists had discovered a bacteria in the hot springs of Yellowstone that had a polymerase enzyme able to stand the heat. Putting that into the mix meant that one batch of polymerase could last for 30 cycles.

But still: Building up the DNA again requires a lower temperature of 122 to 149 degrees. Repeating them back and forth is 30 cycles of hot and hotter. Dr. Loewy remembers one Thanksgiving when his lab was quiet, shortly after he read about Dr. Mullis’ discovery. “It was a great day,” he said. “It was quiet. I could set up all these different incubators at different temperatures with timers. I was moving things constantly.

“My wife called me up. She said our guests are here. I said, ‘This is exciting. I’m reproducing what I read in the literature.’” 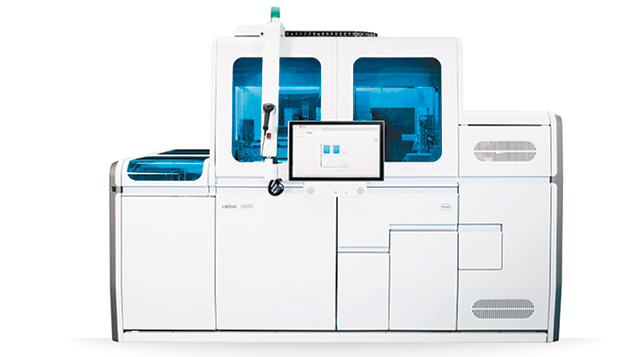 It may have been fun for Dr. Loewy, but it also was a lot of work. “When I came to Roche we started modeling what would be the specifications for building an automated system,” he said. “It went through many iterations until the final commercial product came out. It’s a tremendous transformation from when it started to the pretty attractive machine that’s out there today in many clinical labs.”

So what happens to the swab after it goes up your nose?

“It goes into a sample transport medium, a little tube that probably has a little liquid in there that basically preserves the nucleic acids until you get it to a lab for testing,” Dr. Loewy said.

Then “it gets put into the Roche machine — together with specific chemical materials that are needed for the test.” Those materials include the nucleotides, the building blocks for the genetic material. And they include “most importantly, the primers.” The primers are the answer to the question “How do you locate specifically a virus that is much smaller in the myriad of other nucleic acids?” The primers determine which sections of DNA — of all those that are in the sample — will be copied a billion times over. They are made of nucleotide sequences that are chosen to uniquely match the virus DNA and not match other DNA that the swab might have picked up.

Each test also comes with its own recipe of the exact temperatures and times for each stage of the process, because the best temperature for making and breaking the molecular bonds of the DNA sequence depends on the particular molecules that make up the sequence.

“The machine cycles the temp-eratures,” Dr. Loewy said. “It also has robotic arms inside it so it can move the samples around. It’s totally hands off.”

One final piece. The target DNA is attached to a molecule that glows. So if the covid sample is there, and multiplied a billion-fold, the machine can detect it in the test tube -— and even, based on brightly it shines, how strong the fragment was in the original sample. And if nothing glows: Congratulations, you’ve tested negative!

Dr. Loewy said that he was wary of some of the companies that have rushed to develop tests for covid in hopes of entering what is a growing market. “A lot of experience is required to do these diagnostic tests,” he said. “Just having a quick result in a laboratory doesn’t mean you have something that can be used routinely and give you the same robust and rigorous results.”

Meanwhile, at Touro College of Pharmacy, Dr. Loewy and his students have returned to the laboratory and are focusing their research on covid. “We have slowed down some of the other projects to really contribute,” he said.

They’re looking into whether existing drugs can be applied to treating patients with covid. “We’re also looking at it in terms of the genetic variability of individuals,” he said. “We are in the era of personalized medicine. The drugs that work for one individual don’t necessarily work for a second individual. We are trying to see if we can look at an individual’s genetic makeup and predict a priori which individuals may have a response to specific drugs.”

There already is data that show that certain drugs used to treat certain diseases — say lupus — work on people with a certain genetic profile. Now the question is: Can that same drug also treat their covid? “It’s predicated on personalized medicine and the overall science of pharmacogenetics,” Dr. Loewy said.

“We are doing this in collaboration with probably the largest cell repository in the world, what’s called a biobank. They have stored samples of different populations with different disease states. We’re looking at different populations to actually make our initial assessments. For this approach, what’s critical is the genetic makeup of the individual, as opposed to the genetic makeup of the virus.

“There are specific sequences that have been identified in people who respond well to a specific drug. We can take these genetic sequences, design the same kind of primers to replicate them, and assess whether a specific population are responsive to this particular drug.”

So what should those of us who aren’t researchers be doing?

“A very important part is to listen to the advice that’s being given out there,” Dr. Loewy said. “I go into some areas, some communities, and people aren’t wearing masks. Maybe the mask is not the most comfortable thing, but the data is very clear as to how masks have helped to curtail diseases progression.

“Number two is patience. Everybody is very anxious for the world to get back to the way it was, for a vaccine to come out, for drugs to be available. I can appreciate people’s impatience, but people should feel good about the efforts that are going on. There will be solutions in the not too distant future, so just be patient and work with the guidance you get from your health care practitioner and public officials.”