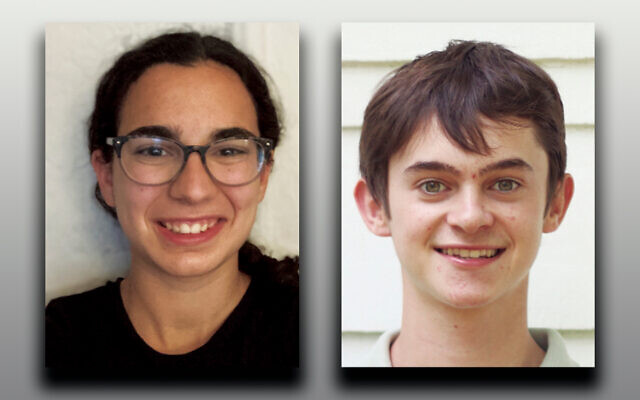 Reyna Perelis of Teaneck, left, and Caleb Levine of Montclair

Two local high school students are among the 26 fellows selected for the 35th cohort of The Bronfman Fellowship of 11th-graders from across North America who will spend a transformative year of study and conversation centered around pluralism, social responsibility, and Jewish texts.

Reyna Perelis of Teaneck and Caleb Levine of Montclair were selected from among 177 applicants and will join an alumni network that includes some of today’s prominent Jewish writers, thinkers, and leaders. During the year, they will also interact with a group of Israel peers chosen through a parallel selection process of the Israeli Fellowship.

Reyna attends SAR High School where she is a member of the Model UN team, learns daf yomi and tutors bat mitzvah girls. She attends Camp Stone, and enjoys the outdoors, hiking, biking, and learning about climate action. Caleb, who has attended public school since childhood, is a member of his high school’s Civics and Government Institute, active in both Model Congress and United Nations, and a political advocate on the federal, state, and municipal levels. He works with children and is a teacher’s assistant at his synagogues religious school where he helps special needs students learn Hebrew.

The 2021 Fellowship year will begin with an immersive summer at the Isabella Freedman Jewish Retreat Center in the Berkshire Mountains of Connecticut. This one-time decision to hold the summer experience in the United States instead of Israel was made in close consultation with public health experts in response to the pandemic, to offer the greatest possible opportunity to safely bring the group together for the summer and continue their tradition of immersive in-person learning and community-building.

The Bronfman Fellowship, founded in 1987 by Edgar M. Bronfman, formerly CEO of the Seagram Company Ltd. and a visionary Jewish philanthropist who passed away in December 2013, taps 26 North American teenagers at a formative point in their lives, the year before college, when an intense, immersive experience will have the most impact. The Fellowship year functions as a Jewish identity incubator, with serious text study, lessons taught by some of the world’s premier Jewish educators, and sustained discourse about pluralism, social justice, and the future of Jewish people. The year begins with a five-week summer study program that typically takes place in Israel and includes a transformative week-long encounter with a parallel cadre of outstanding Israeli teenagers. Programming continues with two seminars in the United States focused on North American Jewish identity. Upon graduating high school, the Fellows join an alumni community whose members inspire one another to contribute their talents and vision to the Jewish community and the world.

“Edgar Bronfman would have relished the opportunity to get to know this year’s Fellows,” said Becky Voorwinde, executive director of The Bronfman Fellowship. “They are a passionate, inquisitive, talented and incredibly bright bunch. I look forward to seeing them challenge and inspire one another and their communities throughout their lives.”

Adam R. Bronfman, president of The Samuel Bronfman Foundation, said he was “impressed and heartened” by the new cohort. “The energy, diversity and intellectual firepower of this group speak to my father’s belief that young people can change the world in ways that previous generations couldn’t have envisioned,” he said.