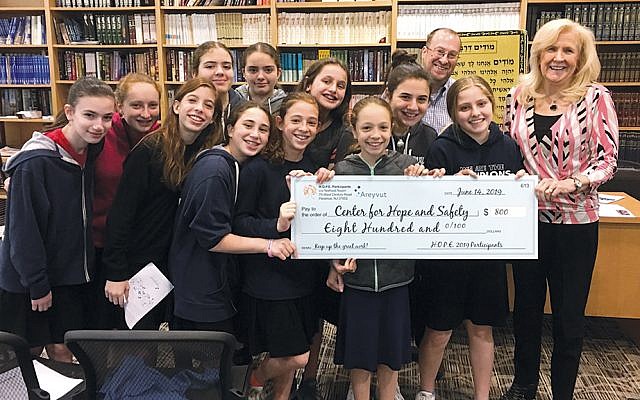 Yeshivat Noam’s young philanthropists present a check to Jean Kirch, the director of development at the Center for Hope and Safety.

Every child in every kind of Jewish school, camp, and youth group learns the mitzvah of giving tzedakah. Kids raise an enormous sum of money for an enormous variety of worthy causes, especially in conjunction with their bar or bat mitzvah.

The New York-based Jewish Teen Funders Network, a project of the Jewish Funders Network, takes the concept to a new level by partnering with programs that train Jewish boys and girls in the art of philanthropy. In the 2017-2018 school year, its affiliated teen foundations collectively donated nearly $1 million to Israeli, Jewish, and secular nonprofit organizations that the teens vetted themselves.

H.O.P.E. (Helping Organizations Provide Essentials), run by Bergenfield based nonprofit Areyvut for the past 10 years at Yeshivat Noam in Paramus, is a local participant in the network. Areyvut director Daniel Rothner leads H.O.P.E. as an elective for second semester seventh graders.

“It’s really been incredible,” Mr. Rothner said, reflecting on a decade of H.O.P.E. “Everyone is taught to give tzedakah from an early age, but deciding as a group what to focus on is distinct. Working together as a board is also unique at that age and gives the kids skills they can utilize throughout their lifetime.”

Where do the young philanthropists get the money to allocate? It differs among programs. At Yeshivat Noam, parents can contribute toward a fund that awards students reaching bar or bat mitzvah age $300 in lieu of individual gifts. The celebrant gets $100 in cash, $100 in the form of a Judaica House gift card, and $100 to give to a charity.

Kids electing to participate in H.O.P.E. contribute that last $100 to create a philanthropic kitty. The past school year, the pooled funds added up to $1,200 and a few participants added more through initiatives such as a lemonade stand.

In the end, the group presented $800 each to two local organizations: Breaking the Chain Through Education, a Verona-based nonprofit that works to eradicates child slavery in Ghana; and the Center for Hope and Safety, formerly Shelter our Sisters, a Bergen County agency providing support and assistance to victims of domestic violence and their children.

Approximately ten Friday sessions in the spring semester begin with selecting an area of focus and a mission within that area of focus. This process fosters valuable leadership and teambuilding skills, according to Mr. Rothner.

“This year’s group was all girls, and its mission statement was to provide support for children who have been neglected, fostered, or abused,” he said. “I asked them many times if they really wanted to do this. It’s not typical. Usually kids choose issues such as hunger, poverty, environment, health care, or special needs. This was an especially savvy, sensitive group.”

Mr. Rothner presents each group with a variety of relevant potential recipients to consider. Then they whittle down the list, determine what more information they need, write a “request for proposal” to the agencies under consideration, and invite representatives for a “site visit,” via video call or in person, to ask more questions.

“An amount of money like $1,200 is not so much for an agency. But people make an effort to present to teen philanthropy programs,” Mr. Rothner said. “For example, a representative from Chai Lifeline once drove here from Lakewood.”

Parents are invited to the check presentation ceremony. So are Yeshivat Noam sixth graders; that way, they can learn about H.O.P.E. and consider signing up in seventh grade. 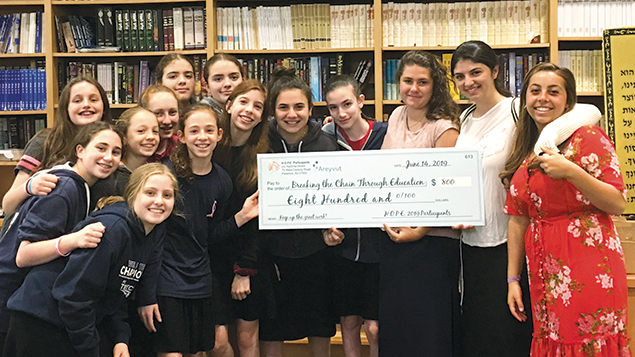 The daughter of Evan Robbins, founder of Breaking the Chain, and some friends accept a check from Yeshivat Noam’s young philanthropists.

After the children make their allocations, H.O.P.E. has them devote another session to a volunteer project for the funded agency or agencies or for a candidate that didn’t make the cut.

“We are unique among teen philanthropy programs in that way,” Mr. Rothner said. “This year we decorated individual canvases, some for the Center for Hope and Safety and some for the Jerusalem Hills Therapeutic Center,” one of the programs that was under consideration. “It was a way to help the organization even without funding them. In this way, the children learn that money is not the only way to support a worthy cause, and maybe some of these kids will support the organization in other ways in the future.”

Shira Oshinsky of Teaneck said that participating in H.O.P.E. has made her “a more influential and giving person. I now plan to be involved in more charities and fundraisers to help people in need.”

Yedida Baer, also from Teaneck, said the H.O.P.E program taught her “that here are so many ways to do good. Both small and big actions can make a powerful difference.”

Leah Rothman of Bergenfield said she felt great pride in what she and her classmates accomplished. “Even something small can have a huge impact on someone else. Think of how our grants will help so many adults and children in need.”

One of the girls in the most recent cohort is Mr. Rothner’s daughter, Yakira, who said she emerged from the experience “inspired to act, because I see how much I can help and what a difference it can make.”

“We’ve had almost 30 pairs of siblings participating in H.O.P.E. over the years,” Mr. Rothner said. “Yakira is the third of our four kids. We have seen that if philanthropy is a shared experience it really impacts the whole family.”

Joanne and Stuart Oppenheim of Fair Lawn said that their children, Aliza, Oren, and Zachary, all chose to participate in H.O.P.E. and they found the experience to be “inspiring and valuable. It empowered them to decide where the dollars they donated and collected went. It showed them how charities are set up and how everyone can make a difference. It enabled them to think critically about important causes as they continued into young adulthood.”

In the 10 years that Areyvut has run H.O.P.E. at Yeshivat Noam, it has engaged 168 students, who allocated $17,700 to local, national, and Israeli agencies. Mr. Rothner said that its impact shapes participants’ philanthropic behaviors for years afterward.

Atara Troodler, a 2010-2011 H.O.P.E. participant who lived in Teaneck then and now lives in Israel, said the program “opened my eyes not just to the importance of doing chesed for others, but it gave me a real understanding, at a relatively young age, of just how important and meaningful it is to incorporate basic acts of kindness and tzedakah into my daily routine. Being given the opportunity to make a real difference in the lives of others as a middle-school student, through my participation in H.O.P.E., gave me a unique hands-on experience that left a profound impression on me.”

Meital Fuksbrumer of Teaneck, a 2015 participant, said the program “shifted my perspective by putting charity work at the forefront of my mind. After completing the program and donating the money to our chosen organization, I felt a satisfaction that I can recall to this day.”

Mr. Rothner previously ran short-term teen philanthropy programs at a few places, including the Kaplen JCC on the Palisades in Tenafly. Then he got a grant from Targum Shlishi — a Florida-based foundation dedicated to providing creative solutions to problems facing contemporary Jewry — and approached Yeshivat Noam because that’s where his own children were students. He said that the head of school, Rabbi Chaim Hagler, “has been an avid supporter of this program since its inception.”

“For the past 10 years, H.O.P.E. has been a powerful program for our students,” Amy Vogel, the school’s director of development, said. “Learning about tzedakah and chesed in this hands-on experience empowers young people to prioritize volunteerism. The program shows students that each person can make an impact on the greater community through involvement and activism. We’re grateful to Areyvut for taking the lead to teach and model these important lessons for the students at Yeshivat Noam.”

Based on H.O.P.E.’s success with seventh graders, Mr. Rothner now has proposed to the school’s leadership to institute a “round two” for eighth graders next year, in addition to the seventh-grade elective.

Meanwhile, this summer Areyvut is recruiting 10 participants for “Chesed Begins at Home,” a “pop-up” four-session Jewish Teen Philanthropy program for rising eighth- and ninth-grade students held at Young Israel of Teaneck. The fee is $200, $100 of which will go toward the pool to allocate funds to a Bergen County agency and the rest will to cover Areyvut’s expenses. For information, call (201) 244-6702 or email info@areyvut.org.