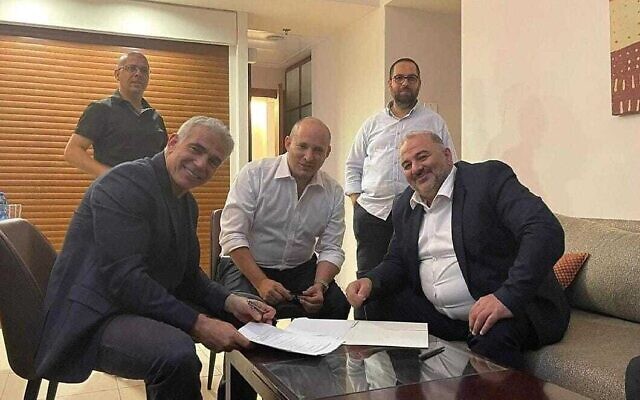 Thirty-five minutes before a midnight deadline, Yesh Atid leader Yair Lapid on Wednesday night informed President Reuven Rivlin he is able to form a government in which he and Yamina chief Naftali Bennett will switch off as prime minister, positioning themselves to replace Israel’s longest-serving leader Benjamin Netanyahu as premier.

Under the terms of the new coalition, Bennett is to serve as prime minister until September 2023, when Lapid will take over from him until the end of the Knesset term in November 2025. The agreement came together after Ra’am leader Mansour Abbas threw his support behind the would-be government late on Wednesday night, setting up his Islamist party to be the first majority Arab party to be part of a ruling coalition in Israel’s history.

Despite Lapid’s declaration, it remained unclear if the prospective “change government” will make it past the finish line, as his declaration must still be approved by the president, and the Knesset vote of confidence to approve the government likely won’t be held for nearly two weeks. In addition, another right-wing Yamina lawmaker on Wednesday night announced he could vote against the new coalition, a move that could potentially doom the prospective razor-thin government of right-wing, centrist, left-wing parties and an Islamist faction.

“I congratulate you and the heads of the parties on your agreement to form a government. We expect the Knesset will convene as soon as possible to ratify the government, as required,” Rivlin told Lapid in the phone call between them on Wednesday night, according to the President’s Office.

The Knesset must schedule a vote of confidence in the new government. However, as the next plenum session is not until Monday, June 7, it would only be then that the Knesset Speaker, Likud’s Yariv Levin, is formally informed that he needs to schedule a vote on the new government. He then has up to a week to schedule that vote, so it would likely only be scheduled for June 14, giving Netanyahu and his supporters 12 days to try to deprive Lapid and Bennett of their majority.