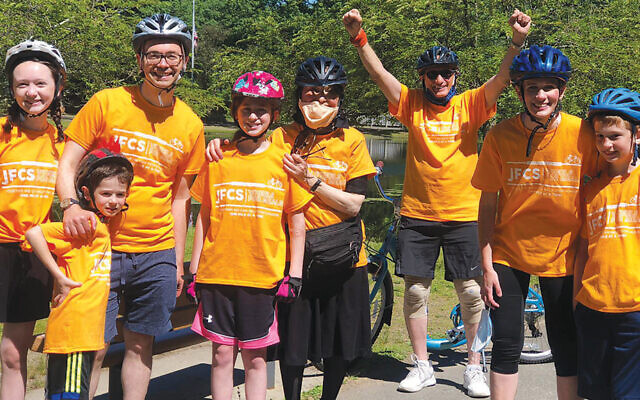 Jewish Family & Children’s Services of Northern New Jersey’s 11th annual Wheels-for-Meals: Ride to Fight Hunger will be on Sunday, June 13, starting and ending at Spectra Labs in Rockleigh. Funds raised will support the agency’s food insecurity services for homebound seniors and disadvantaged individuals and families in Bergen, Passaic, and Hudson counties. Some of these programs include the Corner Market food pantry, which provides food and household items to more than 700 local households, and the kosher Meals-On-Wheels program, which delivers seven meals a week to more than 350 seniors and individuals.

Last year’s 10th annual ride was virtual, but more than 200 people participated by bike riding (some on stationery bikes), hiking, and walking, safely and distanced. As a result of their efforts, JFCS surpassed last year’s fundraising goal by $20,000.

This year, JFCS will return to the traditional format; participants can ride together on 3-, 10-, 28-, and 50-mile bike routes. To keep the event as safe as possible, JFCS staff will limit crowding in the starting area, and there will not be a mass start this year. There also will be a guided hike, a virtual spin class, and a bike riding lesson, taught by Shepard Grinker of Tenafly Bicycle Workshop, for 4- to 12-year-olds.

This year, the Wheels for Meals Ride has more than 40 corporate and small business sponsors. Among them is Sandie Reilly, aka the Bike Lady. As a result of restructuring at her company during the pandemic, she began to repair bicycles to supplement her income. Friends and neighbors made an effort to support her by hiring her and referring her to new customers. Sandie wanted to give back to the community, so she decided to be a sponsor of the JFCS’s ride to show her gratitude.

The JFCS Ride has become a favorite charity among younger generations. Three teens, Willow Becker from Englewood, Zak Krohn from Teaneck, and Ben Ashkenase from Tenafly, will celebrate their b’nai mitzvah with their friends and family at the ride. “This ride is important to me because it’s a great opportunity to raise money for charity and have fun while doing it,” Zak said. “I’ve learned from my family over the years that giving to charity is a very important thing to do,” Willow said. “It saddens me greatly that there are people who are homeless and who need food and so the food pantry seems to me to be a very important charity. I happen to love bike riding so it made me happy to do something charitable while doing something I love.” According to Jana Ashkenase, Ben’s mom, “We know that food insecurity is an important issue, but especially this year during covid, those needs have grown significantly.”