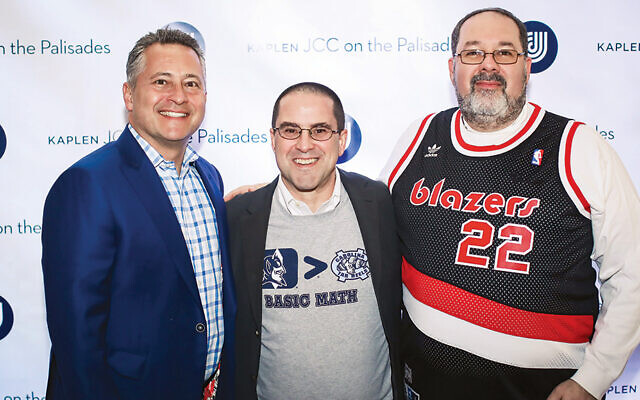 JoJo Rubach and Jeff Levitt, co-chairs of the annual Sports Night of Champions, with the Jordan Shenker, the JCC’s CEO. (Photos courtesy JCCOTP)

The Kaplen JCC on the Palisades in Tenafly will hold the fourth annual Sports Night of Champions on Thursday, June 10, at 6 p.m., in a tent at the JCC.

Last year, the JCC founded the New Jersey Jewish Sports Hall of Fame to honor Jews who have distinguished themselves as leaders in the field of athletics in New Jersey and fostered their Jewish identity through sports. This year’s inductees are David Stern z”l, the longtime NBA commissioner, and Tal Brody, fondly named Israel’s “Mr. Basketball” and officially Israel’s international goodwill ambassador.

Sports Hall of Famers are nominated and chosen based on the following criteria: publicly identifying themselves to be Jewish; demonstrating outstanding accomplishments as athletes, coaches, sports media, sports administrators, or sports figures who made a significant, positive impact in our community; displaying excellence in leadership, sportsmanship and character; and have a connection to New Jersey — they could have been born in the state, have lived in New Jersey for at least four years or live there now, or have played professionally for a New Jersey or tristate area sports team.

The Joseph Taub Scholar Athlete awards will be presented to one female and one male high school senior from Bergen County, who each will receive a $3,600 college scholarship in recognition of their excellence in sports, in academics, and in their communities. Runner up and honorable mention awards also will be distributed. Scholarship athlete awards are made possible by the Joseph and Arlene Taub Foundation in memory of Joseph Taub.

The family-friendly event will have a pop-a-shot basketball game booth, a live auction, and an awards presentation to support scholarships for families in need at the JCC. There will be a strolling buffet with top-shelf liquor. Food includes sushi, an Israeli food station in honor of Tal Brody’s personal appearance at the JCC, and a New York deli station in honor of David Stern z”l.

“Every year, our sports night exceeds our expectations as a high-energy fundraiser that fills us with pride, knowing we can help countless children, families, and seniors in need in our community,” Mr. Shenker, the JCC’s CEO, said. “Launching our New Jersey Jewish Sports Hall of Fame substantially adds to our pride, as it allows us to honor both living and deceased leaders in our community who have demonstrated a lifelong commitment to sports, their Jewish identity, and the desire to inspire the next generation when it comes to both sports and sportsmanship.”