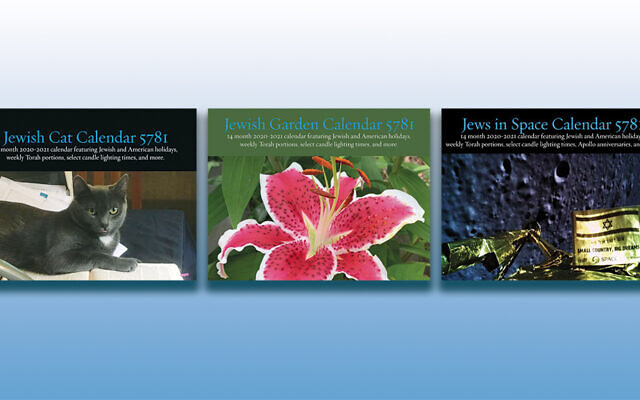 The Hebrew month of Av began on Wednesday, and the race is on to Rosh Hashanah, now less than two months away. For those of us of a non-digital bent, with a new Jewish year comes new Jewish calendars.

Two years ago we told you about the Torah Cats Jewish Calendar published by Teaneck’s Ben Yehuda Press, featuring gorgeous felines in studious repose next to or on top of the treasured classic texts of the Jewish people — along with the secular and Hebrew dates, Jewish and American holidays, and the weekly Torah portions.

Last year, the Jewish Cats Calendar was a bit less studious. Some of the animals posed before a menorah or in a box of matzah.

This year, Ben Yehuda Press has just announced a line of three themed calendars. The cats have come back, and there also is a Jewish Garden Calendar, featuring flowers, and a Jews in Space Calendar, which features “heavenly images from NASA and the Israeli space program.”

In addition to the standard Jewish and secular events, the Jews in Space Calendar notes the birthdays of Jewish science fiction writers and actors, and “important dates in space exploration, including the Apollo missions of 1970-1971.”

Publication depends on a successful Kickstarter campaign, but the good news is that the calendar needs dozens, not hundreds, of supporters to step up with pledges to make publication possible.

Ben Yehuda Press still is soliciting pinup-quality photos of cats studying Torah or otherwise doing Jewish; you can submit yours to cats@benyehudapress.com.

The calendars will sell for $18, and can be found at Kickstarter.com and BenYehudaPress.com.