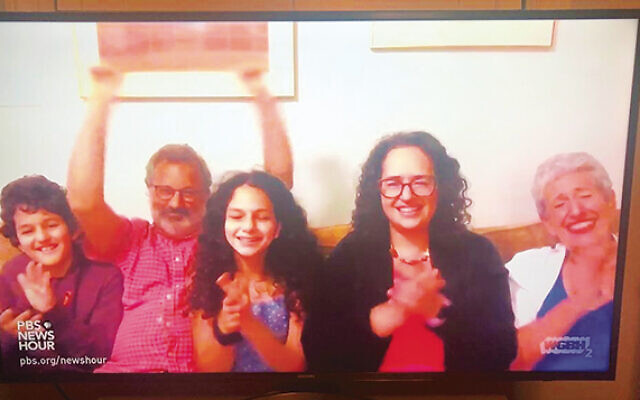 From anecdotal evidence, more than a few people had the same disconcerting but oddly comforting experience as they watched the Democratic National Convention last week.

As they stared at their television or computer screens, they thought they saw a familiar face; it was gone quickly, but who was that? Their brains jiggled a bit. It wasn’t one of the famous people, or even famous-for-politician famous ones, but a close-to-home one; they saw it very briefly on Monday evening, and then twice, for longer, on Tuesday.

By the second time on Tuesday, many people had figured it out, at least judging by the waves of emails and messages it caused.

It was Dr. Elaine Shizgal Cohen of Teaneck, sitting with her middle daughter, Rabbi Ayelet Cohen; Rabbi Cohen’s husband, Rabbi Marc Margolius; and their three children, Galia, 12, and 10-year-old twins Ziv and Meital. On Tuesday night, both times they appeared the family had the screen to themselves. They all were smiling and applauding.

Dr. Cohen retired as head of the Schechter Network; throughout the course of a long career she has worked on educational policy for the United Synagogue of Conservative Judaism and headed the Solomon Schechter Day School of Union and Essex. She’s very active in her shul, Congregation Beth Sholom, where she’s headed many committees and initiated many programs; until the pandemic struck she was working on wise aging. Her late husband, Dr. Stephen P. Cohen, was an academic and activist well known for his work on the Israeli peace process.

How does a more-or-less regular person end up on the Democratic National Convention?

A combination of luck and quick action, it turns out.

(Okay, nothing about Dr. Cohen or her family is average, but that’s not the point here.)

Rabbi Cohen is the senior director for the New Israel Fund in New York; she’s a long-time political activist. Her husband, Rabbi Margolius, who led Manhattan’s West End Synagogue for many years, now is at the Institute for Jewish Spirituality. They live on Manhattan’s Upper West Side, but they joined Dr. Cohen in the Berkshires for the summer.

Rabbi Cohen had joined a group of rabbis supporting Joe Biden, the Democratic candidate for president, early, and “she got an invitation to participate in the convention,” Dr. Cohen said. What does participation in an online convention mean? They weren’t exactly sure at first, but “we knew that in some way it meant being part of the audience,” she said. “We didn’t know exactly how it would work, but we did know that they wanted to get some sense of real people who were following the convention.

“And we qualified for that, and we all agreed that we wanted it,” Dr. Cohen said. “We thought that as a multigenerational group, it would be good, and we thought that it was a great way to get the kids to feel more engaged.”

So Rabbi Cohen emailed the family’s interest in being onscreen. “And then she got a call saying she’d been selected,” Dr. Cohen said.

During all the nights of the convention, the family set themselves up with two screens — one was the computer that would video them, and the other was either the computer or the television they’d use to watch the proceedings. “We had to line ourselves up so that we all were in the frame, and we could see how we looked,” Dr. Cohen said.

There was a lag in the convention as they saw it on the screen, they soon learned. The two screens were not in synch; the one that would video them was more accurate, and the broadcast one was a bit behind.

“Ayelet was getting emails with instructions,” Dr. Cohen said. The screen that soon would go live also had instructions. “We would get a message saying ‘In two minutes, start clapping.’ And then it would count down, and say, ‘In 30 seconds start clapping.’ We all were in position, and we knew what we had to do.

That’s when they stopped clapping.

“And then we got a message that said the next time could be in 15 minutes, so we could take a break.”

It didn’t work as well the first night, Dr. Cohen added. There was a family who sat on screen for a good 15 seconds before they started to clap; that taught the technicians how to refine their timing.

She knows that many people watched the convention from the number of people who got in touch with them. “It was so much fun,” Dr. Cohen said. “The four of us had cellphones — Galit has one — and we all got emails and text messages and calls. ‘Was that you?’ ‘I saw you!’ ‘How did you get there?’

“There were hundreds of emails.

“Even a member of my shul, who is a staunch Republican — I went to morning minyan the next morning” — virtually, of course, because one thing online minyanim give is the opportunity for someone in the Berkshires to go to a minyan in Teaneck — “and he said ‘May I have your autograph?’ What really was fun was realizing that this Republican was watching the Democratic convention.”

Dr. Cohen has been using the opportunity to urge the people who’ve gotten in touch with her to vote. “It was a good way to get the message out,” she said. Voting matters immensely.

It also was good for her grandchildren, she added. “I was thinking back to going to demonstrations over the years, whether it was for Soviet Jewry or to end the war in Vietnam, and to taking my kids to demonstrations, whatever the cause was. They remember it. They feel engaged.

“We thought that this would build memory,” Dr. Cohen said.