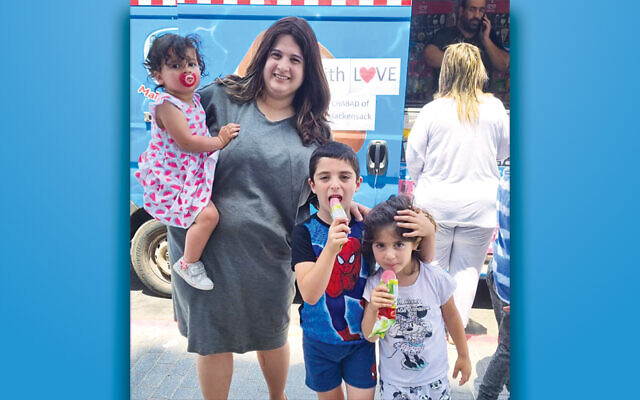 One of the many families that enjoyed ice cream courtesy of donors to Chabad of Hackensack. (Courtesy Chabad)

After a successful online campaign, Chabad of Hackensack sent an ice cream truck for Shavuot to families in Ashkelon. One of Israel’s hardest hit cities, it was under constant rocket attack.

“People often think of the conflict in terms of the armed battle and the damage caused, but forget about the humanity and what it means for an average family in Israel,” Rabbi Mendy Kaminker of Chabad of Hackensack said. “For us, this was our way of being there for those who are often forgotten: the impact this has on children — and with Shavuot last week, you can imagine how challenging it was for them to celebrate under constant rocket attacks.

“As a child growing up in Israel, I experienced firsthand the trauma of waking up in middle of the night and running for safety because of missile attacks. Reading about the rocket attacks in Israel, and seeing pictures of terrified kids running to a bomb shelter in the middle of the night, made me want to do something.”

He shared his idea on Facebook and started an online fundraising campaign. In less than 24 hours, the campaign’s goal of $3,200 was surpassed — the campaign collected $4,200 in that time.

“Many people donated, from Hackensack and as far as Melbourne, Australia,” Rabbi Kaminker said. “People really wanted to help.”

The truck was in Ashkelon just hours before Shavuot; the holiday traditionally is a time to each dairy — including ice cream.

“To me it’s much more than ice cream,” Rabbi Kaminker said. “It’s about sending the kids a message: We love you and we care for you.” For more information, go to ChabadHackensack.com.