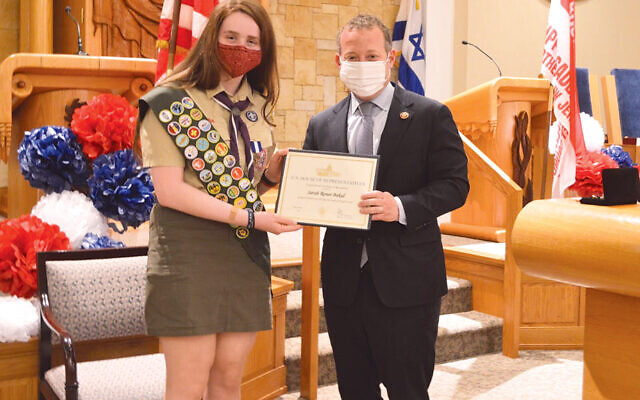 Congressman Josh Gottheimer presents Eagle Scout Sarah Renee Bakal with a congressional certificate of recognition at her Court of Honor inside Temple Israel of Ridgewood on May 23.

Sarah Renee began her Girl Scout journey in kindergarten and still is a member of Troop 933 in Upper Saddle River; her mother, Miriam, leads that troop. She earned Girl Scouting’s highest honor, the Gold Award, in May 2018 for a project in which she distributed surplus donated library books that otherwise would have been discarded.

“I was looking for a new adventure,” she said of her decision to pursue the rank of Eagle Scout. “My older brother, Robert, had been involved in the program, and he loved it. I wanted to prove girls could do it too.”

The synagogue was chosen for the Court of Honor because Temple Israel is where Sarah Renee performed the service project required to receive the rank: a paver walkway dedicated in memory of her grandfather, Harry Shames of Upper Saddle River, who died in November 2017.

“My project focused on accessibility. It’s something I’d thought about for years,” she said. “My grandfather was wheelchair-bound for a few years before he died, and before that he walked with crutches. On the high holidays our family would go out to the patio a few steps down from the synagogue, and it was so hard to get him down there.” 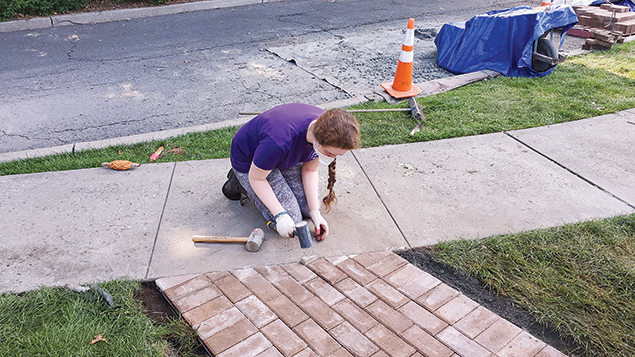 Her project had two aspects: First, she repaired and repainted 375 feet of handrails at all the entrances around the building. Second, she recruited “three dozen great volunteers” from her Girl Scout troop, Girl Scout canoe racing team, and Temple Israel to help her construct a 42-foot walkway connecting the patio to the sidewalk; it has curb cuts and ramps leading into the building. The patio often is used for receptions and outdoor services.

“It was a very new experience for me,” she said. “I was lucky enough to have the support of a construction company that I reached out to. They taught me how to build the path and make the bricks level so it wasn’t a tripping hazard.”

The planning started in May 2020 and the project was finished by end of August, after a combined labor investment of 365 hours. “My goal was to have it ready for the high holidays last year,” Sarah Renee said.

“While Sarah Renee’s intent was to create a pathway where one could bring a wheelchair, she also managed to construct an improvement to our facility that matched the beauty and design of what we had, so that it is hard to imagine how it was ever not there in the first place,” he said.

“The combined respect towards the elderly, personal and communal heritage, and sacred space symbolized by her Eagle Scout project aptly exemplifies the values that the Eagle Scout rank stands for,” Rabbi Fine continued.

“Temple Israel, which as a religious institution has for decades embraced an egalitarian approach to Judaism, celebrates the inclusion of girls into the Boy Scouts and could not be more proud that Sarah Renee has become the first female Eagle Scout in our region.” 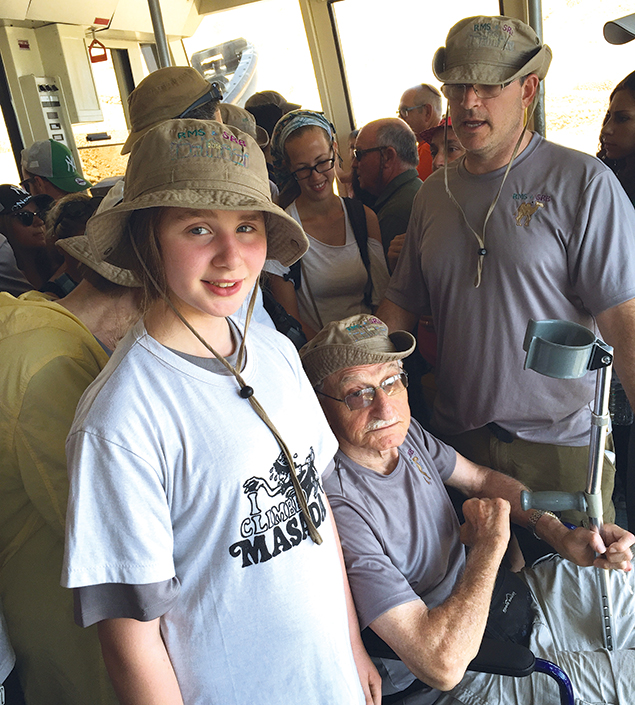 Sarah Renee Bakal is with her grandfather, Harry Shames, at Masada in 2015.

“I earned the Jewish Scouting Award, and it shows that the values in scouting are similar to the values in Judaism — service and devotion to others,” she said.

She attended religious school at Temple Israel until eighth grade and has long been involved in United Synagogue Youth — that’s USY, the Conservative movement’s youth group. “I’ve been on USY’s Social Action/Tikun Olam Regional Board since my sophomore year, and that’s where my interests really align with Judaism and scouting,” she said.

Sarah Renee’s father, Todd, who was scoutmaster of Boys Troop 133 in Upper Saddle River from 2015 to 2017, has run Scout Shabbat programs.

Mr. Bakal said that scouting “has always been open to and part of Jewish values. One of the very first presidents of the Boy Scouts of America was Mortimer Schiff,” a prominent Jewish banker. “One of our rabbis in Bergen County, Joseph Prouser of Temple Emanuel of North Jersey, was national chaplain of the National Jewish Committee on Scouting, and he’s an Eagle Scout as well.”

In addition to her brother, now 19, Sarah Renee has a nearly 22-year-old sister, Mollie, who also earned a Girl Scouts gold award.

“It feels amazing to be the first female Eagle Scout in Bergen County,” Sarah Renee said. “I worked so hard, and it was really great to see my efforts pay off.”

In June, she will graduate from Northern Highlands Regional High School in Allendale, and she will enter Wellesley College in the fall.

“You age out of scouting at 18, and for me that’s in two weeks, but I plan to stay involved as an adult,” Sarah Renee said.

Speaking at the Court of Honor, Mr. Gottheimer said, “Everyone knows achieving the rank of Eagle is no little feat. I am beyond honored to be here to celebrate the hard-earned achievements of Sarah Renee Bakal … a member of the inaugural class of female Eagle Scouts, as well as one of the first Scouts in the entire country to earn both the Girl Scout Gold Award and the rank of Eagle.”