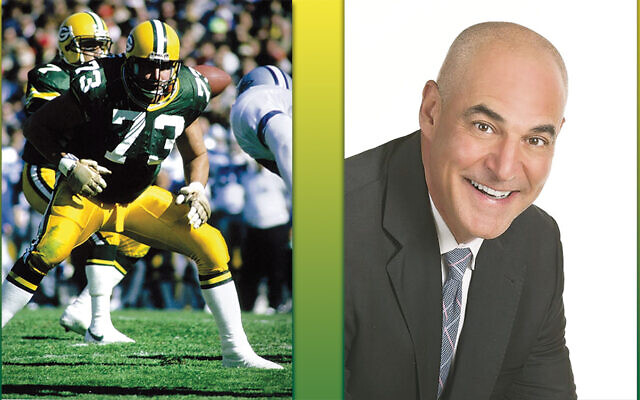 Alan Veingrad, left, as a lineman for the Green Bay Packers and, right, as a businessman and speaker. (Courtesy JCCOTP)

Alan Veingrad learned the hard way that dreams are only a first step to success. Without hard work and tenacity, they rarely come true. In his case, he said, he went from being “a skinny Jewish kid from Miami” to winning a Super Bowl championship with the Dallas Cowboys.

His story, which culminates in his becoming the only Jewish member of the victorious Texas team “and one of only a few Jews in the NFL,” goes beyond football. “I learned from good coaches,” he said, adding that even now, he incorporates their teachings into his daily life.

For example, he said, “I won a game ball and the coach said, ‘Congratulations. You played a great game yesterday. But what are you going to do today? The game’s over. What will you do to help next week’s game?’” That, he said, taught him not to spend too much time celebrating — there’s always more work to be done.

Mr. Veingrad enjoyed a successful seven-year career as an offensive lineman in the NFL, first with the Green Bay Packers and then the Dallas Cowboys, with whom he won Super Bowl XXVII. On December 18, the Kaplen JCC on the Palisades’ Patron of the Arts Program will bring Mr. Veingrad to Tenafly to tell his story and pass on the lessons he has learned.

Mr. Veingrad, who now lives in Boca Raton, Florida, and is a businessman and motivational speaker, said that he always wanted to play football. “My mother said my brother and I should be professional. But she didn’t finish her sentence. So I became a professional football player and my brother became a police officer.” Ultimately, he said, she became “a huge fan,” following his games and cheering him on.

Trying to break into the sport was challenging, Mr. Veingrad said. He wasn’t heavily recruited, he was undersized for the position he wanted, and the NFL turned him down twice. “I wasn’t drafted out of college,” he said. “You dream, you work hard for four years, and you’re told that you’ll be drafted into the NFL. Then you get there — and they fire you. Most people can relate to being fired or told that they’re not good enough. I was told that twice in two months.”

Still, he didn’t give up. “I said, they’re right. I have to get stronger and faster and try it again. I wasn’t smart enough. I didn’t know enough about playing in the NFL — the techniques required to play at that level. I learned the techniques associated with the game and it enabled me to make a team.”

A further challenge occurred three years into his playing career, when he hurt his hip and five doctors told him that his football days were over. “I was ready to retire, but my mother, as my biggest fan, came to my rescue, telling me to see another doctor and get another opinion,” he said. It was that doctor who helped him, and he went on to play another day.

“Everyone has injuries they still feel today,” he said. “Some of my teammates are in a much worse place than me. Some have depression. Some got addicted to painkillers or have real physical ailments.” In light of recent findings about brain damage, he had himself examined “and passed all the tests.”

Mr. Veingrad went to Texas A&M at Commerce, where he majored in health and physical education. He said that although he grew up in Miami, which had a large Jewish population, not only was he the only Jew on his football team, but he was one of only a very few at college. “I was focused on athletics,” he said. “This was the Bible Belt of the U.S., but I never encountered any anti-Semitism. Many of my teammates asked me questions about being Jewish, and I generally had to call home for answers. We were interested in each other. It was mutual.”

As for Jews being in short supply in the NFL, Mr. Veingrad said that “it’s hard to convince a Jewish mother to let you play football, and most Jewish people are not 6 feet, 5 inches.” Still, he reflected, “most Jewish players were offensive linemen like me, the biggest guys on the field.”

While Mr. Veingrad went into business after retiring from the NFL, “my brother got me started as a speaker. As a police officer, he got me to speak at elementary schools, and this morphed into speaking around the country.” He does not do that now as much as he used to do, mostly because “at 6 feet 5 inches. and 230 pounds, I’m not so comfortable on an airplane.” Not to mention that he also has a full-time career and three grown children.

His talk at the JCC, he said, will focus on “my life story, overcoming adversity, the importance of a strong work ethic and discipline, a focus on health and exercise, and camaraderie. Life is filled with lessons that apply to day-to-day life. People read the biographies of successful people and learn from their failures and how they overcame them.” His own story, he added, “is also interesting from a Jewish perspective.”

Calling Mr. Veingrad “a captivating speaker and storyteller,” Jordan Shenker, the JCC’s chief executive officer, said that the athlete “will also engage with the audience and share his secret strategies for helping others transform their lives.

“We are extremely excited to have Alan Veingrad speak at the JCC,” Mr. Shenker said. “Our Patron of the Arts program always looks to feature speakers who can educate, inspire, and engage our community, and drawing a Super Bowl legend like Alan Veingrad makes us proud. It is sure to be a highly motivational and uplifting evening for everyone who attends.”

What: Will speak at an event sponsored by the Patron of the Arts Program at the Kaplen JCC on the Palisades and the Kaplen Foundation

Where: Kaplen JCC on the Palisades, 411 E. Clinton Ave, Tenafly

Cost: VIP seating is $100, exclusive for Patron of the Arts subscribers and includes reserved VIP seating and a meet and greet dessert reception with a photo opportunity. Preferred admission with priority seating is $54; general admission is $36. Register at jccotp.org/veingrad. For more information, call Nina Bachrach at (201) 408-1406 or email her at nbachrach@jccotp.org.