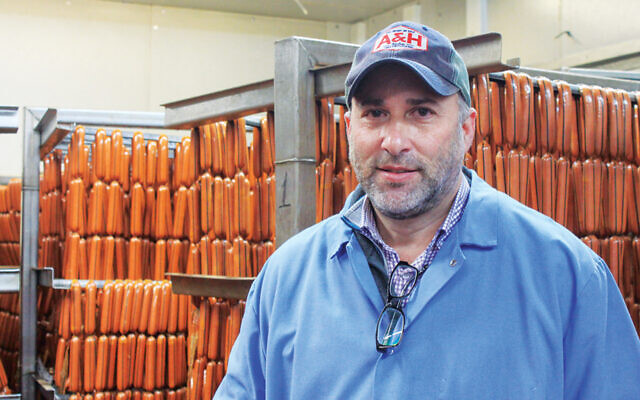 Seth Leavitt in his A&H factory in Hillside.

Ever wonder if there’s a difference between a hot dog and a frank?

Is it semantics? Country of origin? Taste? How it’s made?

With July Fourth just around the corner, hot dogs on the barbecue are par for the course when it comes to the celebration.

And kids – whether you’d rather just feed them broccoli all the time or not – just love them.

“Parents tell us, ‘My kids don’t eat meat, but for some reason, they eat your hot dogs,’” said Mr. Leavitt, a father of three, adding that A&H hot dogs have no fillers and are gluten-free. “Children have great palettes. They will tell you whether they like something or not,” he said.

So, when Jewish Standard Our Children was offered an exclusive tour of Mr. Leavitt’s 25,000-square-foot facility in Hillside, near Newark (he was formerly in the Bronx, N.Y.), it was a Charlie-and-the-Chocolate-Factory (but with hot dogs) opportunity to learn about how that tasty dog in a bun, smothered with spicy brown mustard, gets its start.

Mr. Leavitt has been in the Hillside factory since 2007. A whopping 12,000 pounds of hot dogs emerge daily from this 24-hour run facility, necessary to keep up with demand, he said.

The soft-spoken Queens, N.Y. native and current resident of Englewood didn’t always dream of becoming the so-called “Hot Dog King.” He said he wanted to go to law school; that was his dream but the food industry was always close by. His father had worked in the meat industry, and Mr. Leavitt through college, worked in food sales, selling chicken nuggets, imported fish, and eventually, got a sales job at a meat company.

“Now, this has become my dream,” Mr. Leavitt said.

Mr. Leavitt has taken the company to a whole new level of modernization and production using technology and marketing. He has also stayed true to the original recipe and loyal to his commitment to quality. He uses only choice meat products and pure spices that are specifically procured.

“I took a great brand that few people knew about and grew it,” he said of A&H, which was founded by Oscar Abeles and his nephew, Leopold Heymann in 1954.

These days, A&H has gone worldwide. Its goods have been shipped to as far away as Alaska, is found in nearly all kosher supermarkets, ShopRite, Stop & Shop, Costco, and most recently Trader Joe’s.

While the company offers a panoply of kosher meat delicacies, the biggest and best sellers remain the original hot dogs and salami.

On our tour, our party of five suited up appropriately. In boots, disposable long coats and full disposable hair nets, and masks, Mr. Leavitt ushered us into his facility as he narrated the hot dog story, from finish (we started in the shipment room working our way backwards) to start through the factory that employs 35 people.

Quite striking upon entry to the warehouse was the redolent fragrance of spices, a proprietary blend that Mr. Leavitt would not divulge – the so-called secret sauce.

We were impressed with the pristine appearance of the different facets of factory and the calm efficiency of production. We watched the packing of hot dogs, from the fitting of each finished cooked hot dog by hand into its plastic casing where it gets vacuum sealed and labeled. We saw the massive ovens where the hot dogs cook for 2 ½ hours and A&H’s famed long 2-pound salamis cook for 4 hours. We saw machines that case the blended hot dogs, preparing them for cooking. We saw the blended meat, waiting for the next step. And we saw the “muscle meat,”  lean first cuts of brisket that gets turned into corned beef and pastrami. It was so good-looking that the most discerning brisket aficionado among our group, Jewish Standard account executive, Brenda Sutcliffe, was duly impressed.

Mr. Leavitt’s passion for his work was evident during our tour.

And what of the Leavitt’s own culinary habits? What’s on the table at his home?

And true to his own belief and love of his products, at his own son’s recent wedding, in addition to the other food, there was a great display of delicious deli delicacies courtesy of A&H for guests to enjoy.

That is a mazel tov.