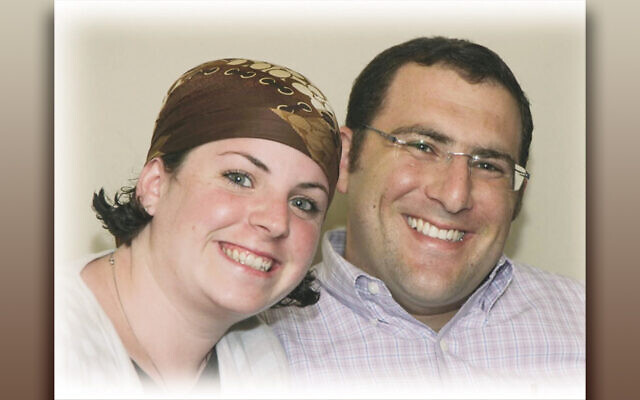 Tzippi Rimel and her husband, Ephraim

When Ruven Ellberger lights his Chanukah candles in Teaneck this year, it is likely that his thoughts will center on his relatives in Israel who are fighting for their lives, and on a dear cousin who was lost several weeks ago in a horrific car accident near Jerusalem.

As he sped down Route 443, next to the settlement of Givat Zeev, an 18-year-old crashed his vehicle into Mr. Ellberger’s cousin’s car, killing both 34-year-old Tzippi Rimel and her three-week-old daughter, Noam Rachel.

“They were stopped for a red light at an intersection,” Mr. Ellberger said. “The 18-year-old was going 100 miles an hour and rammed into them.”

Tzippi’s husband, Ephraim, and their 12-year-old son, Itay, survived the crash and were taken to Shaare Zedek Hospital. Itay’s condition still is listed as critical. In the best-case scenario, his father — the Jerusalem coordinator for the youth movement Ezra — will return home paralyzed from the waist down.

The Rimels’ other three children, who are 10, 8, and 3 years old, were not involved in the accident. They now are living with their grandparents, Yisrael and Ita Gantz, who moved to the family’s home in Neve Tzuf to take care of them.

Describing his cousin, an English teacher, Mr. Ellberger used the word “engaging,” painting a picture of a creative and warm woman who brought out the best in her students. He recalled that she and Ephraim spent several years in Chicago as shlichim for Kollel Torah MiTzion, a Yeshiva University program that establishes community-based Torah study centers.

“Tzippi came from a multiple-generation Israeli family,” he said. “She always had the best English, from watching American TV. She was the most interactive cousin,” and the one he was closest to. “She was engaging, had green eyes, and a beautiful smile.” Efraim’s family came from Chicago but made aliyah in the 1980s, when he was a child. The couple lived in Tzafaria, a religious moshav in central Israel, before moving to Neve Tzuf.

The Times of Israel spoke with members of the Neve Tzuf community. According to their report, “Tzippi was an amazing person, full of love, benevolence, and care for every human. She was very involved in the community. She worked as an English teacher at the local school, and the couple were in the past youth coordinators in the community and emissaries to the Jewish community of Chicago.”

“They were in Chicago from 2010 to 2014,” Mr. Ellberger said. “There are a lot of Americans who knew them and loved them. She had a big impact on a lot of people. When she was younger, she did her national service as a tour guide in Jerusalem at archaeological sites.” If she was not quite an “actress, she knew what lifted people up.”

He recalled that when a series of fires engulfed her town several years ago, she made videos to send out soliciting support for the community. “She was good in front of the camera,” he said. “She knew what to say.” She also knew what to say and write to students who were struggling, he said, urging them to be strong and to believe in themselves.

“The students she taught in Chicago who made aliyah called her right away,” he said, noting that “on Saturday nights, the high school kids used to go to her house to hang out.”

Still, he recalled, “Even though she was funny and fun, when it came to her Jewish beliefs, she was serious and pure in her beliefs about the land and people of Israel. She was idealistic about the power of the Jewish people.”

Two weeks after the accident, Mr. Ellberger said, Efraim’s prognosis was not yet clear. He’s had several operations but was no longer in an induced coma. “But Itay has serious critical injuries all over, head to toe,” and remained in a coma.

“The best case scenario is that Efraim gets out and is paralyzed,” Mr. Ellberger said. That will require major adjustments to his house to accommodate his handicaps. “They will need financial support,” he said. He and his brother, Shai, went to Israel for a few days “to be with the family and help at shiva,” he said. We were worried about the kids.” He was relieved to see that they “acted like kids, playing with toys.”

To help the Rimel family, Mr. Ellberger is working with one of Tzippi’s friends to raise money and honor his late cousin. Through a website called www.helprimel.com, they already have raised more than $1 million, to be given directly to the family. Since more money will be needed to retrofit the house and pay the family’s expenses due to loss of income, he hopes that the donations will continue to grow. So far, more than 10,000 donors from around the world have contributed.