A group of Israeli mental-health professionals is offering free anonymous psychological first aid for New Jersey healthcare and law-enforcement personnel on the covid frontlines. The help is offered through a new project launched in partnership with voluntary first-response network United Hatzalah of Israel.

New Jersey is a test case for the pilot program, CoronaCare Israel. But the initiative began with a conversation between a New York physician and a psychologist in Israel who used to live in New York.

The physician, anesthesiologist Dr. Ram Roth, said that the coronavirus pandemic marked the first time he ever felt life-threatening danger on the job. Intubating covid-19 patients at Mount Sinai Queens literally put him face to face with the infection.

He and his colleagues on the one hand worried that their personal protective equipment might not keep them safe enough, and on the other hand they worried that the equipment put an emotional barrier between them and their patients. Many also isolated themselves from their families to avoid the possibility of exposing them to the virus.

“At the beginning of the pandemic, there was a lot of uncertainty about how to take care of patients and protect ourselves,” Dr. Roth said. “The instructions and guidelines were changing daily, and it was a very stressful time for us.”

Although the hospital offers psychological support for its staff, “I was worried that my colleagues might not feel comfortable going within our system and would prefer an outside, anonymous system that’s easy for them to access,” he said.

That’s why he contacted his friend Sharon Slater, a clinical psychologist who is licensed in New York State and has been practicing in Israel for 30 years. Dr. Slater is a member of United Hatzalah’s psychotrauma and crisis response unit.

Dr. Roth remembered that Dr. Slater had been part of a United Hatzalah team that flew to Texas to give psychological first aid to evacuees and relief workers after Hurricane Harvey, nearly three years ago.

“I was so proud of her work there, and the concept that Israel sends out people for such support,” Dr. Roth said. “These are people who have dealt with terrorism and terrible situations flying to the U.S. and helping. The difference between that and the current situation is that an incident is over in a certain time period, while here we had no sense of when the pandemic would be over and they couldn’t come here and do counseling face to face. But everyone is using Zoom and I thought it would be so cool if Sharon could do trauma therapy work remotely. She thought it was a great idea.” 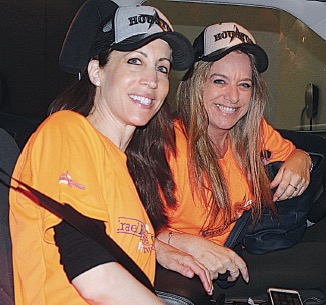 Dr. Sharon Slater smiles with Dr. Einat Kaufman, the head of the UH Psychotrauma Unit and one of the 10-member team of volunteers for CoronaCare Israel. They’re in Texas in 2017, for a mental health crisis intervention.

Dr. Slater gathered some colleagues, including Dr. Gary Quinn, a psychiatrist in Israel specializing in crisis intervention and the treatment of anxiety, depressive disorders, and post-traumatic stress disorder. She set up a Zoom meeting of the group and invited Dr. Roth to participate in a sample session with Dr. Quinn.

“He asked about my stress level at that moment and we discussed some of the issues behind it,” Dr. Roth said. “At the end of the session, after using certain techniques he gave me, my level went down from 10 to 5 or 6. Subsequently I had three more sessions with Dr. Quinn privately and he’s still available to me. Just that knowledge that I can reach out when I am overwhelmed really made me feel better.”

That exploratory meeting was back in March. Encouraged by the results, Dr. Slater recruited 10 mental-health professionals — eight of them American expats, another two who speak Spanish.  Under the guidance of Dr. Quinn and Dr. Batya Ludman, they created a protocol to provide anonymous long-distance mental-health care, grief counseling, and emotional stabilization for first responders and medical professionals.

“We wanted to start small to make sure this was a need, and we also have great friends here,” Ms. Tennenbaum said.

She is publicizing CoronaCare Israel to doctors, nurses, respiratory therapists, emergency medical technicians, law-enforcement officers — to any professional who’s been on the covid frontlines.

“We’ve asked clergy of all faiths to spread the word,” she said. “We reached out to the volunteer ambulance corps in Teaneck and Bergenfield, and to our United Rescue units in Jersey City and Englewood. We are trying to make sure anyone who can benefit from this service hears about it.”

“We’ve been seeing that healthcare providers in the thick of it have time to process their emotions now that the number of covid cases has decreased,” she said. “Through this initiative, they can get support and tools to manage a possible second wave and mitigate burnout.

“What sets this emotional and mental support service apart from others already available through social organizations and hospitals is the level of expertise our volunteers have in the field, and mainly the free service that is completely anonymous and confidential.”

CoronaCare Israel appointments, by video or voice call, are available 24/7 through an anonymous signup link at www.bit.ly/UHCoronaCare. “Confidentiality is of prime importance to us, and we will never require any identifying details,” Ms. Tennenbaum said.

“The fact that we don’t know them is a key point,” Dr. Slater said. “Dr. Roth and I discussed at length why many healthcare workers didn’t reach out for mental health support available to them, even though they were clearly crashing under the load of the surge. Our program was developed to address at least some of those issues. The anonymity is a big piece of it.”

Stress, burnout, and “a great sense of being alone” are common among these professionals, she continued. “They’re wrapped in PPE and can’t communicate easily with other members of the staff or with their patients, and many are staying apart from their spouses and children.” she noted.

The trauma frontline medical workers experience during this pandemic “is very different than the kind of stress we usually see in a traumatic situation in the sense that this is not a discrete traumatic incident,” Dr. Slater added. “It doesn’t have a defined endpoint, and that adds significantly to the trauma. They don’t have time to process today before heading into tomorrow. And that’s a real recipe for PTSD.”

CoronaCare Israel aims to provide “brief practical techniques that allow them to learn to lower their stress levels on their own with a little practice and help them calm themselves in moments when they feel themselves getting anxious.”

Dr. Khaya Eisenberg, a clinical psychologist from Passaic who now lives in Israel, working on research at Hadassah Medical Center, also is on the team. “During the shutdown here in Israel in March, I was put on leave from my job and I had extra time and wanted to contribute to the situation somehow,” Dr. Eisenberg said.

“I heard a podcast where the host described an interview with a doctor who was struggling. I thought maybe I can provide emotional support to doctors.”

Dr. Eisenberg put out feelers and eventually was introduced to Dr. Slater, who was organizing the initiative then. “She invited me to be part of this group just before Pesach,” she said. “Dr. Quinn did several online trainings I attended on the self-care protocol and the team developed its own protocol using exercises they had found effective in helping people manage stress.”

If CoronaCare Israel is successful in New Jersey, United Hatzalah may offer the service to other areas of the United States that were hard hit by covid-19. There are about 350 people in the organization’s psychotrauma and crisis response unit, and CoronaCare Israel is not limited to members of that unit. “We have a number of additional mental-health professionals lined up if we see a large response and want to train more,” Dr. Slater said.

“I recommended it to everyone around me and I hope they use it,” Dr. Roth said. “It’s about listening, affirming feelings, and helping us identify what we can control.

“For me, what was very difficult is that I haven’t had to pronounce someone dead since I was a resident, but here an overwhelming amount of patients were dying. In talking to Dr. Quinn, I realized I need to take a more active satisfaction in doing even the little things I can do in my interactions with the patient, like using my own phone to help patients connect with their family on a daily basis.”