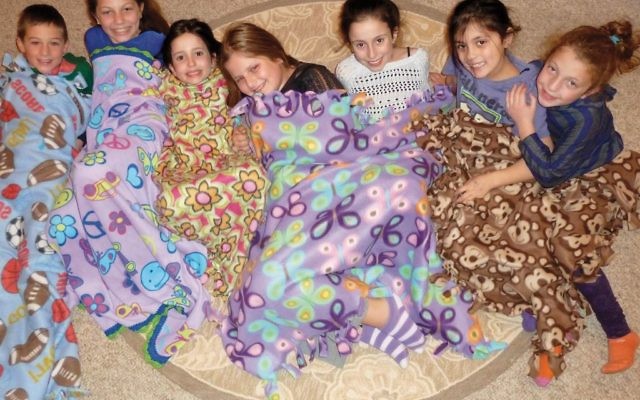 Hayden, Rosenthul, Maron and Paulen children with handmade blankets that will go to needy youngsters.

Has Chanukah become nothing more than a gift-giving frenzy in your family?

Are your children more interested in unwrapping presents than lighting the menorah?

Four Hillsdale families invented a socially conscious solution to holiday madness and now want to share it with others in their Congregation B’nai Israel community and beyond.

The idea they dubbed “Give/Get” works like this: On four of the eight nights of Chanukah, kids in the Hayden, Rosenthal, Maron, and Paulen families get presents. On the other four nights of the holiday, they give presents of items or time to others. Each family takes responsibility for coordinating one of the four “Give” nights.

Some of the diverse Give night activities they’ve undertaken in the past few years include donating money toward buying bees and livestock for needy farm families through Heifer International, playing Wii and Scrabble with residents of Jewish Home Assisted Living in River Vale, sending holiday greetings to soldiers from Hillsdale stationed abroad, contributing pajamas and books to needy children through the Pajama Project (http://pajamaprogram.org), and providing new, handmade blankets to ill or traumatized children through Project Linus (http://www.projectlinus.org/chapter.php).

“There would not be gift exchanging on those evenings because the children would spend time together and they knew the gifts that night were for others,” Jill Hayden said. “It is much easier to give up gifts when your friends are doing it as well.”

Other families in Congregation B’nai Israel had the chance to experience Give/Get the last two years, when Meryl Rosenthal opened the Pajama Project activity to any member who wanted to contribute.

“We received over 100 donations of pajamas and books, so we know people thought this was a great cooperative effort,” Ms. Rosenthal said. “This year, we decided rather than having one project, we will help other families own the Give/Get concept and choose the charity or charities they want to rally around.”

To preserve the small-communities model that has served them well, the four mothers are offering to group families who sign up into units of four and share the guidelines that have worked well for them.

“We’ll give them a list of resources about projects and ideas we’ve used in the past,” Ms. Hayden said. “We want to take the core program and pass it on so it’s not just about dropping off things at the temple.”

In addition, the congregation’s religious school will participate in Give/Get on Tuesday, December 8, which is during Chanukah this year.

“Passing the theme along will be very positive in helping children learn that the holiday is a time to give and get no matter how you celebrate, and the CBI community is a great place to make these connections,” Ms. Rosenthal said.

The original four families happen to fit well together. The children are friends, and they’re all around the same age, now between 10 and 14 years old.

“When we first brought this idea to our kids they thought it was super, and now it’s just part of what they’ve come to expect,” Jodi Paulen said. “For those of our kids who were just recently bar or bat mitzvah, tying Give/Get into their mitzvah project gave them a bigger sense of tikkun olam, making the world a better place. It was a natural progression.”

Ms. Rosenthal says Give/Get has become a point of Jewish pride for their children. “This ritual teaches them that Chanukah is not about getting a lot of stuff but giving them an opportunity to see what others need, and to do good.”

Ms. Hayden stresses that “the commitment is for one night of giving per family. It is manageable, which is important in our very busy lives. Even doing one night with your family is a mitzvah. That’s how it all began for us.”

For a fact sheet and resource guide to charities, email givegetCBI@gmail.com. For the night of giving at the Hebrew school, Tuesday December 8, email office@bisrael.com for information.