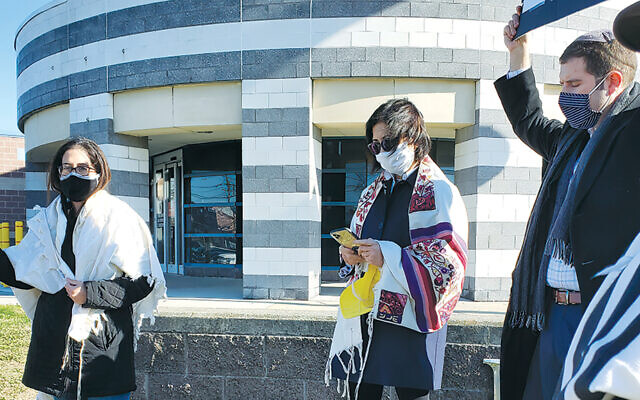 Rabbi Rachel Kahn-Troster, left, protests outside the Bergen County jail in Hackensack in November 2020 with a T’ruah group that also includes Rabbi Mira Rivera of Romemu in Manhattan and Rabbi Jesse Olitzky of Congregation Beth El in South Orange. They were demonstrating their solidarity with hunger striking prisoners.

Once — well, until a month or two ago — Rabbi Rachel Kahn Troster of Teaneck leveraged the bodies of America’s rabbis to fight for social change, as the second in command at T’ruah: The Rabbinic Call for Human Rights.

Now she’s working to leverage investment portfolios — including those of the Union of Reform Judaism — for the same ends, as the number two person at the Interfaith Center on Corporate Responsibility.

It’s a job that promises less dynamic visuals. At T’ruah, where she helped lead a collection of 2,000 member rabbis and cantors, she often was photographed on the front lines of social justice, protesting at the detention centers of the U.S. Immigration and Customs Enforcement agency or marching with farmworkers in Florida. ICCR’s core actions are much less photogenic. The 50-year-old organization helps coordinate shareholder activism among its 200 members.

The causes, however, are very much the same.

ICCR was one of the pioneers in socially responsible investing and shareholding activism.

It began with the realization that through their pension funds, religious denominations had a stake in corporations that they could leverage. They are, after all, part owners; and as owners, they have a say in how the companies are run. It began with as an alliance of the investment arms of the major Protestant denominations and the Catholic Church. (Reflecting its beginnings, ICCR’s office on upper Riverside Drive, near Columbia University and Riverside Cathedral, is in the stolidly inexpressive, purely rectangular building erected by the National Council of Churches and known as the “God Box.”) It since has grown to include the Reform movement (“One of our largest members,” Rabbi Kahn-Troster said) and the Jewish Federations of North America.

“One of my hopes over the next couple of years is to have more Jewish groups join,” she said. “Both to teach social justice organizations why they need to engage with corporations, and also to work with Jewish organizations that have assets — such as federations and family foundations — so they’re thinking about their own responsibilities to further the work of justice, and not further human rights abuses through their complicity.”

It’s about “not just supporting one ethical clothing company, but looking at how the whole clothing industry can stop profiting from the genocide in Xinjiang,” the Chinese province where members of the persecuted Uighur minority reportedly are being conscripted as forced labor to harvest cotton.

“One of the things the Jewish community is really good at is tzedakah,” Rabbi Kahn-Troster said. “We know how to give money to support making the world a better place. Through ICCR we can help them leverage their investments — before they give them away — to support creating a cleaner planet and a more just world. They don’t have to do it on their own. They can be part of a community of organizations with a long track record.”

As a coalition, ICCR has a lengthy, formal process of setting priorities based on its members’ concerns — which to large extent was pushed aside this year as urgent questions about racial justice and the response to covid leaped to the top of everybody’s priorities.

Her father, Rabbi Lawrence Troster, was ordained by the Jewish Theological Seminary of America, and served pulpits in Toronto, South Orange, and West Chester, Pennsylvania. He was also an activist who founded Shomrei Breishit: Rabbis and Cantors for the Earth. He died in 2019. Her mother, Elaine Kahn, has a doctorate in global affairs from Rutgers, and is the author of “Been Hoping We Might Meet Again: The Letters of Pierre Elliott Trudeau and Marshall McLuhan,” which was published in 2019.

Rachel enrolled in the Barnard-JTS joint program as an undergraduate, and then entered rabbinical school after she graduated. “I knew I wanted to study,” she said. “I didn’t have a clear idea what I would do when I got out, except that I knew I wanted to work with adults.”

Her years in rabbinical school — 2003 to 2008 — “was during the blossoming of the Jewish social justice movement.” She went on the first rabbinical student mission of the American Jewish World Service, and she interned with Rabbi Sharon Kleinbaum at Manhattan’s Congregation Beit Simchat Torah.

“My dad always talked about moral issues from the public,” she said. “But Sharon gave me a different vision of what it means to be an activist rabbi. She got arrested twice while I was her intern. She spoke about difficult issues from the bima. The sermon she gave my first Shabbat at CBST was about the campaign against torture by the Rabbis for Human Rights-North America” — as T’ruah was then known.

In her senior year of rabbinical school, Rabbi Kahn-Troster started working at  T’ruah as associate director of education and outreach. “It became very clear to me that being a human rights activist was what I was meant to do,” she said.

More recently, she found herself connecting more deeply to her rabbinic role.

“During the Trump administration, when we all had to speak out and pass into a deeper emotional and spiritual place, I felt myself not just being a human rights activist but being a rabbi,” she said.

Meanwhile, some of the very same issues she fought for at T’ruah are high on the ICCR agenda, and some of the same people continue to be allies. At T’ruah, Rabbi Kahn-Troster led the organization’s alliance with the Coalition of Immokalee Workers, a farmworker-led group founded by Florida tomato workers. (It since has expanded to include tomato workers in six other states, including New Jersey, and other crop workers in Florida.)

“They’re such inspiring organizers,” Rabbi Kahn-Troster said of CIW; the 11 rabbinical missions she led to the group in Florida were among the highlights of her years at T’ruah, she added.

CIW has successfully pushed for companies such as McDonald’s, Subway, Whole Foods, and Walmart to take responsibility for buying ethically farmed tomatoes. Wendy’s has been notably absent from that list, and it’s the target of an CIW boycott. On Monday of this week, CIW announced that the board of Wendy’s had recommended voting for a social transparency resolution. CIW supporters are skeptical as to whether this really represents an about face from the restaurant chain, but it certainly a step. And it came about at the prodding of an ICCR member, the Montclair-based organization, Investor Advocates for Social Justice.