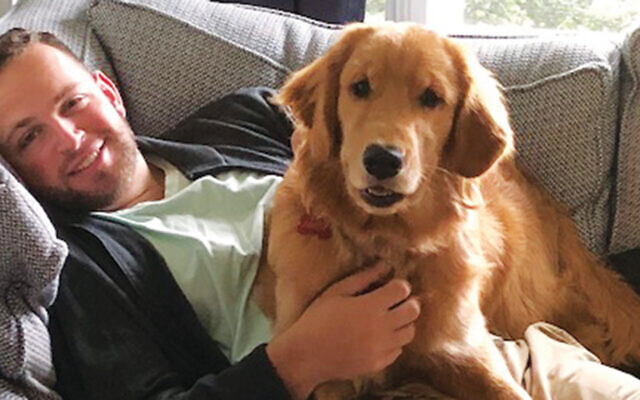 Rob relaxing with the family dog.

Five days after graduation, my oldest son pulled into our driveway. “Robbie’s home,” my youngest reported from the bottom of the stairwell. “Could you sound any less enthusiastic?” I shouted. But he’d vanished, most likely claiming his space on the couch before his brother reclaimed it. Kicking aside the shoes that were blocking the entrance to the front door, I walked tentatively to the window and opened the curtain. Normally I’d have run out to greet him, offering to grab his backpack and dirty laundry bag while simultaneously standing on my tiptoes to give him a kiss. But this homecoming was different. I watched as he reclined in the driver’s seat, running his fingers through his hair. The car idled as he sat for a while, looking pensive. Turning off the ignition, he remained in the seat. Perhaps he was finishing a call, listening to the end of a song, checking something on his phone. But I knew better. He was gearing up for the transition of the century—moving back home with Mom and Dad.

I combed the refrigerator, nervously surveying all I’d purchased. “Hello, hello!” he called, as he always did upon entry. “Hey Rob! How was the drive?” I asked, unsure what to do with myself. “I wasn’t expecting you. Hadn’t you planned to stick around for a while to say your proper goodbyes?” “Nope, everyone was pretty much wiped out from celebrating. I was ready to get out of there.” Finishing the water bottle that I’d just opened for myself, he continued: “I couldn’t fit everything in the car, so I may go back later in the week to pick up things I left in the apartment.” An awkward silence fell between us; the first of many as we waded through the adjustment period. I stood up tall and gave him a hug. “Dad and I are so looking forward to having you home.” “Thanks,” he said, cutting me off. “Is Danny using the upstairs TV, because I really, really want the couch. And I’ll bring all my stuff in later. And just a warning, I have a ridiculous amount of laundry.” Peering into the TV room, Rob yielded to his brother, who’d be heading to college himself in the fall. “Couch is taken. Going down the basement. Can I have something to eat?”

As I slapped the fifth (tenth?) piece of turkey onto the Kaiser rolls he liked, I reflected on my own path after college. Following a summer internship at Planned Parenthood, I’d convinced my parents that I’d gained enough work experience in two months to take it on the road. Without considering the ramifications of being 3,000 miles away from everyone I knew and loved, I packed my favorite Hello Kitty suitcase, withdrew $1,000 from my savings account, boxed up my stereo components and some prized LPs, and relocated to California. I didn’t move back to New Jersey for nine years.

“Sandwich is ready,” I called from the kitchen. The TV was blaring. A comedian I’d not heard of was telling indescribably foul jokes. Was this what I’d signed up for? Grimacing, I called again a little louder: “Your sandwich is ready!” Did he think I was going to serve him? Well, probably, yes. I relented. I would serve him on the couch, and we’d deal with house rules later. By the time I poured his iced tea and threw some chips on his plate, he was sound asleep.

The next morning, a.k.a. afternoon, we unloaded his car and decided what pieces of broken furniture and appliances were worth salvaging, and I began the first of multiple loads of wash. Upstairs, amidst the clutter of things packed hastily, I tried to project a smooth homecoming. “We can do anything you want to this room,” I told him. “I want you to feel comfortable.” Rob shot me a look; the smirk I knew so well. “What?” I asked. “You know what.” There it was. I bit my tongue. “I’d be comfortable if I weren’t living here.” Unwilling to engage in an argument when he’d not yet been home 24 hours, I commented favorably about the music he’d chosen. Shaking his head, he continued: “You moved away, remember? What did Grandma and Papa think about that?” “They never forgave me,” I admitted. “And it took me decades to pay off my student loans.”

We set about making piles and making lists. Always a good team at organizing, we kept tabs on our mutual need to accomplish with immediacy. We folded, we hung, we sorted. We tossed Hefty bags of no longer needed clothing and no longer meaningful keepsakes. We rarely took breaks. In between runs to and from the basement, when it had become clear I was close to collapse, he made his declarations. “1. I need a new bed. There’s no way I can continue to turn my body into a pretzel trying to sleep in this stupid twin bed. 2. Just because you want to give my room a fresh coat of paint, I don’t. 3. Please don’t assume just because I’m home, I’m your personal tech service associate. Whatever your questions, try to figure it out yourself first, and 4. I want to get some new things for my room…” Before he could finish, I excitedly interrupted. “Oh, I figured that! Just put what you want on the list and I’ll pick it up for you. I’ve been saving a million Bed, Bath & Beyond coupons… “No, Mom,” he said firmly. “I want to make my old room my new room.” I could feel my muscles tighten. Then, to be certain I understood, he proclaimed: “I will buy the things I want because for as long as I have to live here, it’s my room.” Holding a wet bath towel, two beer-stained dress shirts, his crumpled graduation gown, and my Penn State sweatshirt, which he’d worn on loan for the past four years, I reminded him that working the night shift would require blackout curtains. “You can buy those.”

Just a week prior, after a whirlwind graduation weekend, I drove east on Route 80 contemplating the following: What would it be like for Rob to reside at home after living independently for four years? He’d studied abroad for a semester, traveled in Europe with friends over winter and spring breaks, and basically done as he’d pleased for a long time. What would it be like for us, the “almost empty-nesters,” who’d indulged ourselves in imagining what it might be like to have the house to ourselves for the first time in 22 years? How might he acclimate? How would we? But each time I mulled over what I knew were uncertain predictions, I heard Rob’s sigh as he said: “Stop stressing, Mom. We’ll figure it out.”

And we have. After a few rocky weeks (ok, months), we’ve found our stride. He knows to communicate with us if he’s not coming home. He always sends a text (preferably before midnight) if he doesn’t have a key. He appreciates the value of Uber. He respects a closed door. He’s witnessed firsthand the fallout from a parental argument and intuitively knows when some well-placed humor might just fit the bill. He’s grown to recognize and understand that Mom and Dad are faced with stressors that are real: college tuitions and other financial woes, aging parents and elder care, the upkeep of owning a home, and the need to recalculate route when unexpected health issues arise. I have reaped the benefits of living with the son I call the great equalizer. He generally goes with the flow and has the ability not just to read me, but to redirect me. In just six short months, I’ve learned to send money using Venmo, take a screenshot, find a program using the wand on Netflix, troubleshoot when my laptop freezes, pair my music to the new car’s Bluetooth, and acknowledge that there are some truly brilliant artists who’ve composed music after 1970. If you are anywhere close to my age, you will undoubtedly appreciate the mastery of these skills.

Robbie’s just returned from working the night shift. After standing on his feet and walking a one million square foot warehouse, he’s exhausted. Though he’s eaten his lunch and dinner during the wee hours of the night when most twenty-somethings his age are fast asleep, he returns home famished. “So, Mom,” he begins, “listen…I’ve saved a ton of money since May, and paid off all my IOUs…” I know what’s coming and fall silent. “Nothing’s set in stone yet, but my friends and I have been researching apartments in Hoboken.” I’d realistically expected this, but I’m not prepared to engage. He senses my apprehension. In an effort to counter, he begins fiddling with his keys, petting the dog, and searching for the remote. When I still don’t react, he plays the card he knows will always bring us back to center: “Gee, I’m hungry. Can I have something to eat?”

Deborah Breslow is a freelance writer and college essay coach from Wyckoff, NJ. Her work appears in publications focusing on home, parenting, and medical advocacy. To read more of her work, visit Breslow’s website at www.djbreslow.com