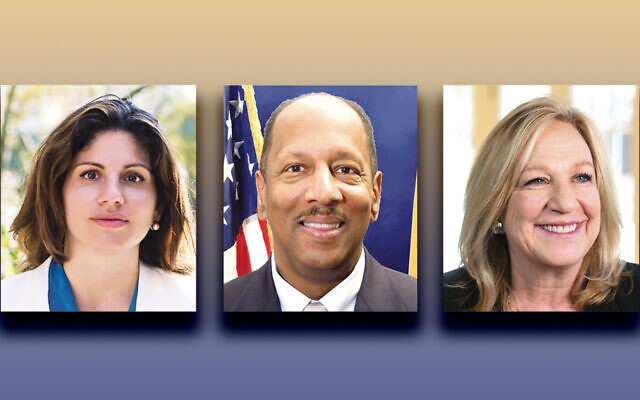 Yael Bromberg wants a federal court to take away one of the remaining markers of New Jersey’s uniqueness.

That’s not how she puts it, of course,

The Fair Lawn lawyer casts her argument in terms of freedom and liberty, of the First and Fourteenth amendments, about political candidates’ fundamental right to compete on a level playing ground.

But the lawsuit her firm filed in federal court on behalf of six federal and local New Jersey candidates takes aim at a New Jersey practice that stands alone among the states of the union.

The practice is known as “bracketing,” and it refers to the way that candidates in primary elections can come together — bracket — under a label that puts them in the same column on the ballot.

This played out in the Democratic primary earlier this month in the state’s 37th District. With two incumbent Assembly members seeking to replace the retiring Loretta Weinberg as the district’s senator, one, Gordon Johnson, received the endorsement of the Bergen County Democratic Committee — and the ensuing party line, which included Governor Phil Murphy at the top of the ballot. Valerie Vainieri Huttle did not receive the endorsement — and when she lost, she said the party line was partially to blame.

For Ms. Bromberg and her clients, the problem goes beyond the party line granting a high-profile endorsement. Because the brackets of joint candidacies other than those on the party line generally do not create a full slate for each of the races, it’s possible for the non-party-line candidate in a two-person race for, say, county clerk, to end up on the ballot’s ninth column, with seven blank candidate-free slots between the two. It’s easy to overlook a candidate in that “Siberia” location. And the poor election results of those candidates in the distant column shows the layout’s unsurprisingly negative impact.

Needless to say, leaders in both parties like the status quo — it gives their party power. And, it has been argued, this unique ballot scheme may give party powerbrokers an outsized role in the state’s politics. 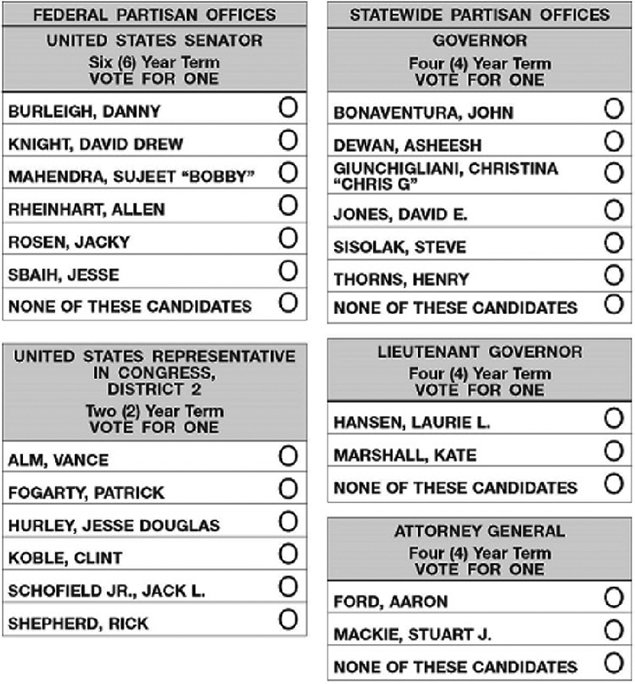 In most states, all candidates for the same post are grouped together on a ballot, as in the example from Nevada.

In arguing that the long-established method of laying out the ballots is unconstitutional, “the case has a bit of a David and Goliath theme,” Ms. Bromberg said. And indeed, where her original suit named the clerks of six of the state’s 21 counties, the motion to dismiss that came in reply was filed by state Attorney General Gurbir S. Grewal.

“It’s almost out of necessity that a small and nimble law firm would take this case on,” Ms. Bromberg said. “Many of the larger law firms in the state would have a conflict of interest, due to their association with local government.”

Working with Ms. Bromberg in her firm was Brett M. Pugach; she also worked with Flavio Komuves of Weissman & Mintz LLC.

There is also legal defense fund formed to support the case.

And groups such as the state League of Women Voters, the New Jersey Institute for Social Justice, Salvation and Social Justice, and the national Campaign Legal Center have filed amicus briefs supporting the effort.

Why now, after all these years of ballot bracketing?

“There’s been an awakening by the public about what access to democracy looks like,” Ms. Bromberg said.

“If we’re looking at it on a national level, at certain states where Republicans are pushing voting restrictions, there’s an incongruence noted for access to democracy here in New Jersey, which is traditionally considered more of a blue state. After the Obama and Trump elections, we saw non-traditional candidates start to seek office. One example is there have been more women for office.”

More candidates led to more contested primaries — and a sharper focus on the bracketing. “Many people were talking about how the line obstructs access to democracy in New Jersey,” Ms. Bromberg said. And that led to finding the six plaintiffs “who have been specifically and directly aggrieved by the line in the 2020 election and now seek to dismantle it for elections moving forward.”

The lawsuit is based on core constitutional issues. The present system “is a violation of the fundamental right to vote,” Ms. Bromberg said. “There’s a question of equal protection. Candidates otherwise equal are treated unequally on the ballot.

In the New Jersey primary ballot, however, candidates are spread out across different columns, as this Camden County example makes clear.

“There’s another violation, arguably more on the First Amendment side, pursuant to freedom of association.” That’s because the bracketing strongly incentivizes candidates to come together. “Why should they have to align and built a platform up or down the ballot simply because they want to run for the town council? If you’re running for local council, the best way to prevent yourself from being stuck in ballot Siberia, where’s there’s a huge gap of columns between you and the main party line and specifically your opponent for the local office, is to try to build a platform up and down the line.

“It begs the question of why. If you want to run for a local race, you look to your neighbors. The idea that you benefit from finding candidates who are interested in running for the U.S. Senate creates a process of gamesmanship you’re forced to engage in to stand a fighting chance. It essentially forces you to associate.”

Rabbi Clifford Kulwin, rabbi emeritus of Temple B’nai Abraham in Livingston, and Ahmed Shedeed, president of the Islamic Center of Jersey City, published an op-ed at NJ.com. The two argued that the party line system “is surely immoral.”

They noted that “Not a single incumbent for a legislative seat who is on the county line has lost a primary in the last 11 years. In effect, the state party organizations, not the voters, choose who represents us,” they argued.

In his legal brief seeking to dismiss the case and defending the status quo, Attorney General Gurbir S. Grewal first argued that the plaintiffs lacked standing, as their elections were over and done.

He further argued that the system did not violate constitutional standards for a fair election.

As for the claim that it violated freedom of association, he argued that “what Plaintiffs propose is not vindication of their own freedom of association, but court-ordered limits on the ability of other candidates to associate with each other.” And to the extent that the system does infringe on candidates’ freedom, it is not “a severe restriction on constitutional rights” and accordingly the “legitimate interests asserted by the State are sufficient to outweigh the limited burden.” Those interests include “ensuring that voters understand candidates’ associational preferences, providing a manageable and understandable ballot, and ensuring an orderly election process.”

The motion noted that the current statutes have been uphold in state court cases dating to 1980 and 1993.

Ms. Bromberg said becoming a lawyer had not been her childhood dream.

“I didn’t know that I wanted to be a lawyer,” she said. “I was very interested in science. I studied political science and environmental science as an undergraduate.” That’s when she got involved in campaigns: “rent control campaigns, efforts for funding for education and not for war, for access to higher education for undocumented youth in New Jersey. I did a lot of work on the misclassification of truck drivers in the New Jersey ports.

“I was so curious just to understand the structure of systems. I was also interested in this question of how this can be constitutional, how can this be legal. Eventually I realized that for me to have the biggest impact, I should be a lawyer. That’s what essentially led me to law school,” she said.

She was born in Brazil; her mother came from the former Soviet Union and her father from Lithuania. She was naturalized as a U.S. citizen as a young adult.

“When you’re the child of immigrants you have a natural curiosity about the system,” she said. “My family has a lot of experience with anti-Semitism and the Holocaust, which infused my feelings about democracy and how fragile democracy is.”

She said a ruling on the motion to dismiss could happen any time. If the motion fails, the case will proceed to discovery; if it succeeds, there’s the possibility of appeal.

Meanwhile, New Jersey’s ballot laws may not be quite as personal for her come the next election: She is preparing to move to Brooklyn, where her husband, Rabbi Scott Perlo, leads the Brooklyn branch of Manhattan’s Romemu congregation.