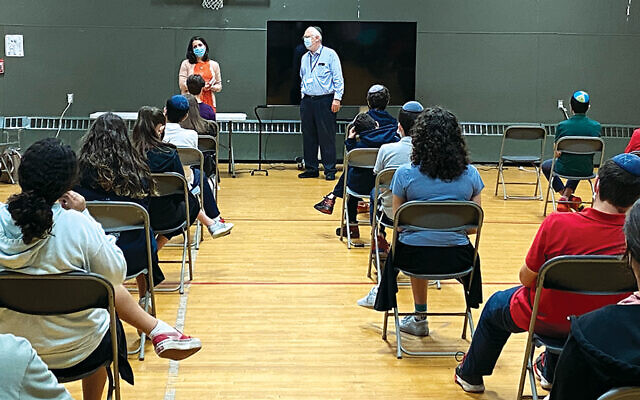 Charitable giving isn’t a foreign concept to eighth-graders at Ben Porat Yosef day school in Paramus. Most of them have observed their parents giving time and money to worthy causes and did so themselves for chesed projects to mark their bar or bat mitzvah.

But Englewood parents Isaac and Deborah Nesser felt that their son, Michael, and his classmates would benefit from a deeper understanding of the religious and practical considerations of how to choose causes and allocate tzedakah funds sensibly.

The Nessers shared their vision with BPY’s head of school, Rabbi Saul Zucker, at the beginning of the 2020-2021 school year.

“We thought tzedakah was a value that is important to communicate to the kids and have hands-on experience in,” Mr. Nesser said. “I grew up in the Syrian community in Deal, where this was communicated explicitly and consistently to us. At around Michael’s age, I was part of a group that spent a year collecting a million and a half pennies for a Holocaust project commemorating the one and a half million children killed, and it made a strong impression on me.”

Rabbi Zucker said the Nessers understand that “it’s a quick ride from here to high school to college. This will be the next generation of Jewish adults before you know it. Their goal was to support a program that would establish a culture of giving, not only of money but also of oneself, and in an intelligent way.”

With seed money from the Nessers, Rabbi Zucker and the school’s administration and faculty designed a multipronged charity education program. Its mission is to train the class of 2021 to become an “informed, experienced, and inspired generation of givers of tzedakah and chesed,” Rabbi Zucker said.

“The Jewish people have always been charitable, but when we’re approached as individuals and as a community from so many different organizations, we have to think about developing an approach to giving,” he continued.

The program began with a series of lessons on what the Torah, the Talmud, and modern rabbinic opinion leaders teach about charitable giving and setting priorities. Rabbi Zev Reichman of East Hill Synagogue in Englewood taught the first class. Rabbi Zucker followed up with additional sessions for all 33 eighth-graders, who live in Teaneck, Englewood, Tenafly, Fair Lawn, and Rockland County.

“Then we asked the students to talk to their families about what organizations they recommend supporting and doing a chesed project for,” Rabbi Zucker said.

“They came up with 16 organizations, and we discussed each one. Then they voted to choose the top five. After that we split the grade into committees and each group was assigned one organization to research. They read about the organization online, spoke to people who had benefited from the organization, and looked into where the donations go. Each group gave a PowerPoint presentation to the entire grade about what they’d found and whether they felt this organization is worthy of support.”

This cause is close to the heart of Ayelet Poupko of Englewood, a member of the BPY’s class of 2021. Her younger sister, Chana Tova, was treated at Sanzari Children’s Hospital before succumbing to cancer in June 2014, when she was 2½. The toddler and her visiting siblings had enjoyed many activities the hospital’s child-life specialists offered, with the support of TKC.

In lieu of bat mitzvah gifts in 2019, Ayelet raised more than $13,000 for TKC to purchase items on the child-life staff’s wish list, including portable crib/play yards, white-noise machines to help children sleep through the beeping of monitoring equipment, LEGO sets, and premium modeling clay.

Rabbi Zucker contacted the organization and asked what the BPY eighth-graders could do for it.

“With the aid of the Nessers and other contributors solicited by the students, we presented a check for $6,000 to Tackle Kids Cancer. But it’s not enough to give money,” Rabbi Zucker said.

“We wanted to do a chesed project for them. They said nothing would be more meaningful than the kids creating a promotional marketing video explaining why this is a worthy organization. We scripted it out, and every kid in the class participated.”

Amy Glazer, the executive director of Children’s Health at Hackensack Meridian Health Foundation, came to BPY to accept the check and watch the first screening of the video.

“She spoke to them about chesed and tzedakah, although TKC isn’t a Jewish organization,” Rabbi Zucker said. “She said she will show the video to Eli Manning, one of their prominent supporters, and post it on the TKC website.”

“We are very grateful to the students at Ben Porat Yosef for selecting Tackle Kids Cancer as the beneficiary of their chesed project,” Ms. Glazer said. “The gift was especially meaningful because the students took the time to learn about the need for more funding to help progress pediatric cancer research, and created a video to inspire others. Tackle Kids Cancer donations go directly to fund the clinical trials and lab research programs at Hackensack Meridian Children’s Cancer Institute. This gift will help us move closer to finding better treatments and cures for pediatric cancer patients.”

Michael Nesser graduated from BPY earlier this month, along with the rest of his class. His father says that he hopes Michael “got from this program the message that this kind of work is something that is important to our family and to our community. It is the responsibility of everyone to be thinking about how to go about this process wisely.”

Rabbi Zucker sees this year’s charity education program as a kickoff to a curriculum that he hopes will be continued in years to come.