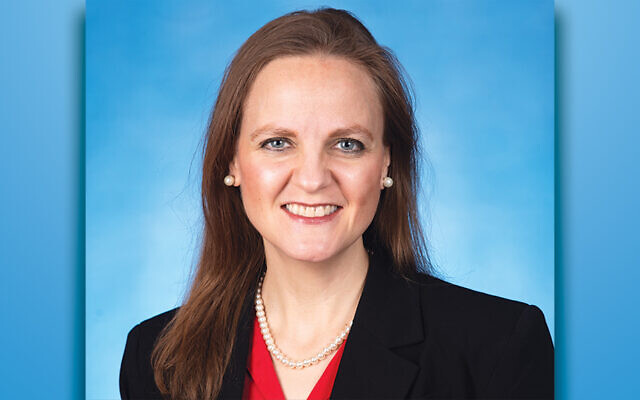 When Rabbi Jennifer Schlosberg of the Glen Rock Jewish Center arranged a community meeting for May 27, she was responding to congregants’ concerns about the situation in Israel. Rockets still were flying, the media was less than fair in assigning blame, and parents — some of whom are staunch supporters of Israel but do not agree with all of its government’s decisions — were unsure of how to address this with their children.

Some congregants told Rabbi Schlosberg that “they were experiencing anti-Semitism on social media,” the rabbi reported. When one parent on a Jewish parent Facebook group asked others if they were encountering the same problem — Facebook friends posting anti-Semitic comments or memes — she found that the situation was widespread. “Many of them defriended” the offenders, Rabbi Schlosberg said. “There was a lot of fear, with congregants thinking about things like, where would I go? Where would I hide?”

Thursday night’s meeting was meant to address that. The program, called “What’s Going on in Israel? How to Respond to Anti-Semitism, Anti-Zionism & Talk to our Kids About this World of Chaos,” was pulled together quickly — and it obviously struck a chord. Representatives of the Anti-Defamation League, the North Jersey Board of Rabbis, the Rabbinical Council of Bergen County, and the JCC of Northern New Jersey immediately responded that they would co-sponsor the event, which would feature two speakers from the ADL.

Rabbi Schlosberg said she heard back from the Jewish groups “within minutes, saying, ‘Of course we’ll join in.’” The one non-Jewish group she invited declined the invitation. While the program was designed to combat hate and bias, the non-Jewish organization said it was “too political.”

Rabbi Schlosberg was taken aback by the response. “Obviously, not all Jews agree politically, but does that mean we can’t support the Jews who are experiencing such significant levels of anti-Semitism and anti-Zionism right now?” she said. “It was a blow to us not to get that support.”

She said that before the hostilities in Israel began, the Glen Rock Jewish Center had run a program specifically designed to be “anti-hate. We broadened our program to be inclusive of the Sikh, Muslim, and racial community, saying that when one is threatened, we are all threatened. Now, with a program specific to Jews, it feels like we’re being abandoned. That’s what’s so hurtful.”

Something else was painful as well. On May 17, a swastika was discovered in the boys’ bathroom at Glen Rock High School.

The school handled the incident well, Rabbi Schlosberg said; parents were notified immediately about the vandalism. “Dr. Michael Parent, the principal, sent out a great email saying that he and a team were meeting with the student organization to address acts of bias,” she said. “The plan is to allow students to lead the way, with adults providing support, to create change and combat bias. It was a welcome response.”

Brett Charleston, the superintendent of Glen Rock’s public school system, confirmed that the high school acted appropriately when it discovered the swastika — it closed the bathroom, photograped the symbol, and called the police, who came to investigate. Unfortunately, camera footage of the adjacent area showed only those people who went through the bathroom door. Neither the perpetrator nor the time of the vandalism could be determined.

She always has felt safe in Glen Rock, Rabbi Schlosberg said, and she attributes acts of intolerance to “a lack of knowledge, or understanding, of different traditions and parts of our culture.” For example, she said, while most Christians will insist that the big tree put up in town around Christmas time is simply a cultural symbol, “to Jews, it’s a Christmas tree. There’s a general lack of understanding among the Christian community of why the tree, to others, is wrapped up in the Christmas holiday. We need to educate them.”

She recalled a time when she, and other Jewish and non-Jewish community members, lobbied the school when homework was due the day after Rosh Hashanah and Yom Kippur, and team practices, as well as sports dinners, were held on the actual holidays.

“They heard us and understood, though it’s still an uphill battle,” she said. So because “Israel is so wrapped up in the heart and soul of who we are, when people don’t want to engage in supporting the Jews because of their ties with Israel, that illustrates how much of an uphill battle there is when there’s inherent bias and misunderstanding of the Jewish connection” to that country.

Rabbi Schlosberg said that she would tell the ADL about the local situation before Thursday’s meeting, but she doesn’t know how it will impact its presentation. Scott Richman, who is the ADL’s New York/New Jersey regional director, and Hannah Sattler, its education program facilitator, are scheduled to speak about the skills needed to respond to anti-Semitism and anti-Zionism in our climate. “They will also provide language and resources on discussing how to talk to your children about what’s going on in Israel,” according to pre-event publicity.

Rabbi Schlosberg noted that a swastika had been discovered at the high school several years ago, leading to the formation of a committee and the launching of ADL’s “No Place for Hate” curriculum in the school. Rabbi Schlosberg sat on that committee. The ADL program is a student-led initiative to “engage students and staff in dialogue and active learning on the topics of bias, bullying, inclusion and allyship,” according to the ADL’s website.

“Sadly, when nothing is happening, we get complacent,” Rabbi Schlosberg said. “There’s less fire in people to get stuff done.” The committee has not been active — “much to my chagrin,” she said — though she has requested several times that it be reactivated.

Mr. Charleston, now in his third year as the school district’s superintendent, said he has to speak with students to find out why the incident occurred. “Student leaders will tell the truth,” he said, adding that the school will appoint a team of students and staff to formulate messaging to the school community. “Kids make horrific mistakes, and they are learning it from somewhere,” he said. “We have to teach them better that this is not acceptable.”

He already has met with CRAN, the town’s community relations activity network, and will meet with it again on June 3 “to discuss who is interested in being on the committee,” which will include representatives from both the school and the community, including religious leaders. He envisions a committee of 15 people.

Not only is the school part of ADL’s “No Place for Hate” program, Mr. Charleston said, but he has asked professors from Kean College to come to teach school staff about prejudice reduction and the Holocaust. In addition, administrators have attended diversity, equity, and inclusion training, and if the school had not been dealing with covid this year, the training would have been provided for teachers as well. “We hope to have more proactive things in place, more things embedded in the curriculum,” he said.

Who: The Glen Rock Jewish Center

What: Is co-sponsoring an ADL briefing, “What’s Going On in Israel? How to Respond to Anti-Semitism, Anti-Zionism and Talk to our kids about this World of Chaos”

Where: Virtual, free, and open to the community

Also: Co-sponsored by the Anti-Defamation League, JCC of Northern New Jersey, North Jersey Board of Rabbis, and Rabbinical Council of Bergen County.