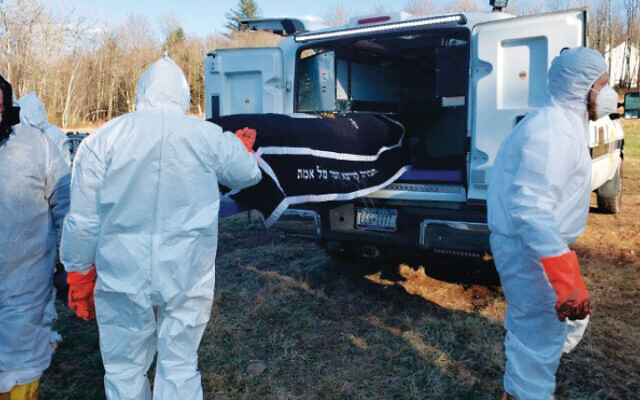 Jewish burial societies tend to keep a low profile. Tending to the dead is termed chesed shel emet — a true kindness — because the beneficiary, being dead, cannot reciprocate. It’s not a mitzvah that lends itself to the limelight.

So it was a bit of a surprise when Benjy Spiro spoke with the Jewish Standard on behalf of Chesed Shel Emes, a full-service burial society with global reach.

But as he told the story of the organization, it made sense: These have been sadly busy times for Chesed Shel Emes, pushing its volunteers to the limits, even as death has been moved to the forefront of everyone’s consciousness.

Mr. Spiro has lived in Los Angeles since 2015, but he grew up in Teaneck, and it was in Teaneck that he was first recruited into Chesed Shel Emes. The year was 2010. A March nor’easter knocked down a tree in Teaneck, striking and killing two men walking home from synagogue.

And word reached Chesed Shel Emes that there was a need for cleanup. Halacha mandates that blood from the dead be buried with the corpse. In Israel, the organization called Zaka became famous during the Second Intifada for its work in gathering up blood and body parts after suicide bombings. Chesed Shel Emes does that work here, and when it needed someone in Teaneck for the job, they connected to Mr. Spiro.

Ten years later, Mr. Spiro doesn’t remember exactly who made the connection; but as an EMT with the Teaneck Volunteer Ambulance Corps, he had some of the qualifications for the job: “being bound by HIPAA and being comfortable with blood.” (HIPAA — the Health Insurance Portability and Accountability Act — mandates privacy for patients.)

Mr. Spiro was 23. After this first case, he went to training for new members in Queens.

Rabbi Mayer Berger of Monsey, who is the second in command at Chesed Shel Emes, said that it started with “a couple who passed away in Boro Park. There was no one to take care of their burial. Rabbi Rosenberg took it on himself to take care of it.”

One mitzvah led to another as word got around. Soon, the work for Jews outside the Vizhnitz community was taking up a serious amount of work for his chevrah kadisha. At that point, in 1985, he started Chesed Shel Emes, with some of his original Vizhnitz volunteers, and he also began recruiting volunteers from outside Vizhnitz. (Chesed Shel Emes has no paid employees and no offices.) 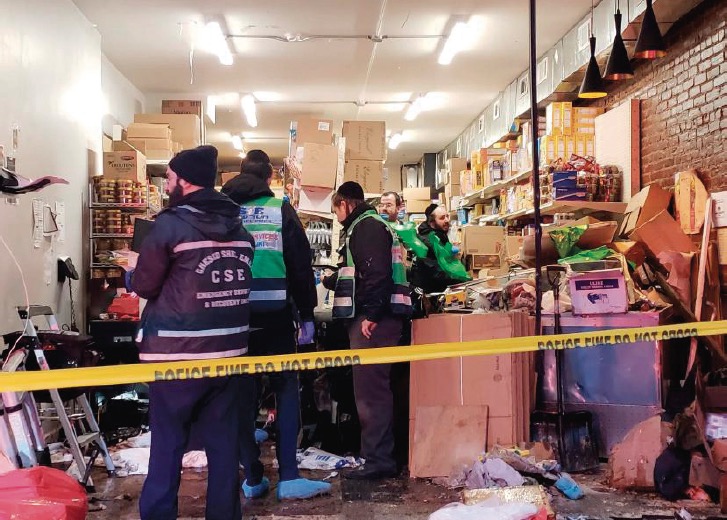 To this day, most of the volunteers are chassidic — Mr. Spiro’s American English makes him a point person for public relations. Rabbi Berger speaks with a Yiddish accent. The group’s activities are centered in the tri-state area’s Orthodox communities. But it sees every Jew as a constituent, ensuring that those without relatives nonetheless are buried in a Jewish funeral in a Jewish cemetery.

Chesed Shel Emes fulfills the central functions of a chevre kadisha. It will prepare a body for the funeral, and it will bury it. It started out by acquiring burial plots from defunct burial societies. It just started its own 19-acre cemetery in Sullivan County. “It costs a lot less,” Rabbi Berger said. “In New Jersey or Long Island, we pay at least $1,500 for grave openings. In Sullivan County, it’s $400 or $450.”

Covid hit like a ton of bricks, Rabbi Berger said. “It happened so fast. We anticipated the load being doubled. No one was prepared for the numbers who came in. Once it started, it was probably seven times the normal volume. Some days there were 40 or 50 taharas back to back, at multiple funeral homes. We probably had a hundred active volunteers in Brooklyn and Rockland on call more or less 24 hours a day.

“We worked through the night to keep it moving, otherwise there would be bodies piling up in trucks as happened in non-Jewish places. We would come into the funeral homes to help with the paperwork to keep them moving.”

This went on for five or six weeks.

Chesed Shel Emes quickly ran into a bureaucratic obstacle. New York law required that a licensed undertaker or funeral director be present when bodies were removed from the hospital and when they were buried. “We were shorthanded,” Rabbi Berger said. “There aren’t that many undertakers and funeral directors.” This added hours to the burial process, and threatened to cause a back-up.

So Chesed Shel Emes worked with New York’s Department of Health and Mental Hygiene to temporarily allow volunteer EMTs and firefighters and students not yet licensed as undertakers to represent the funeral home and sign the bodies out and in. “It expedited the process,” Rabbi Berger said.

Because of the pandemic, rabbis who in ordinary circumstances would help dying people say their final prayers, including the deathbed confession, were shut out of the hospital. Chesed Shel Emes created hotlines with the prayers prerecorded, so nurses could call in and put it on a speaker. Rabbi Berger recorded it in Yiddish; Mr. Spiro recorded in English and a “more modern Orthodox” accented Hebrew.

In addition to the confession and the Shma, “It was a pep talk to them,” Mr. Spiro said. “It was saying that things are obviously very sad and not looking good, but Hashem has his ways and his miracles and his plans.”

Back in December, Chesed Shel Emes was on the scene in Jersey City after the shooting in the kosher supermarket there. “A team was there for days,” Mr. Spiro said. “Cleaning up and working with law enforcement. We work with the FBI. They have to investigate. We have a mandate to bury the body as soon as possible.”

The organization has experience in working with government authorities. It has repatriated bodies from Guam and buried them in New York. And when air travel was suspended, it was able to arrange private flights to bury people in Israel.

“We tried to do it economically,” Mr. Spiro said. “If we could get four or five people on a plane, it brought down costs quite a bit.”

“One thing we do is we fight unnecessary autopsies,” Rabbi Berger said. “If we have to go to court, we’ll go to court to get an injunction. Halachically, an autopsy is only permissible if it’s a homicide or a public health hazard. If you just want to know what happened, it’s not permissible. When a person’s a victim of homicide, we don’t put a lot of effort into fighting off an autopsy. There’s a good halachic reason to have an autopsy — otherwise people will see that Jewish blood is cheap,” because the evidence is lacking to convict the murderer.

“But in a case of a murder suicide and the actual murderer is dead and there will be no case, we do oppose the autopsy.” Rabbi Berger dealt with the medical examiner in one such case in Arizona. He got the bodies without an autopsy.

They’ve also fought to change the protocol for victims of airplane crashes, so an autopsy is not required. “We had a meeting in Washington,” Rabbi Berger said. The policy changed.

When people die in accidents — whether on the road or in the air — Chesed Shel Emes faces the challenge of gathering all the blood and body parts for burial. When people die in a hospital, “We do a disconnect,” Mr. Spiro said. “We take apart the wires and IVs. The body should never be buried with foreign things. Also, if it’s not pulled out carefully, the blood can leak out.”

And sometimes, there’s the task of gathering parts that might have been removed in operations or set aside during an autopsy. Sometimes, if parts of the body can’t be recovered before the funeral, Chesed Shel Emes might leave a pvc pipe sticking up in the grave so the material can be buried with the body without reopening the grave.

“We were never a publicly facing organization,” Mr. Spiro said. “We never solicited attention. Probably did two major fundraisers over the years. We have kind of run as a silent organization. This is an opportunity to share what we do, and bring a greater awareness to the larger Jewish community.”