Sleepaway camp is an incredibly emotional experience. It immerses campers and staff in the world that the camp creates for them. Everything seems deeper, truer, more profound. More magical.

Jewish camping, which intentionally surrounds campers with the melodies, scents, shapes, textures, and colors of Jewish life, which engages their senses as well as their intellects, often leads to a lifelong commitment to that life.

But camp is only two months long, at most. It’s necessary to get back to real life — to family, to school, to relationships with siblings and classmates and neighbors and teachers. To the need to walk the dog and clean the cat litter. To the surrounding reality that camp eclipses but that eventually reasserts itself.

Meanwhile, back in the 10-month-long real world, Jewish professional and lay leaders try to figure out how to bring the intensity and passion of camp into shul for their preteens and teenagers. They know that youth groups can make a difference, but how can they make it work?

Rabbi Jesse Olitzky of Congregation Beth El in South Orange knows how important it is to establish a Jewish identity during adolescence. “I fell in love with Judaism when I started USY,” he said; USY — United Synagogue Youth — is the Conservative movement’s youth group. He went further with it than most members could; in 2002, when he lived in New Brunswick, after working his way up in USY’s Hagalil region, he became the group’s international president. He also worked at Camp Ramah in Nyack; that’s a day camp for children but a sleepaway camp for its young staffers. “I understand that it was youth groups and camping during my own teenage that were essential to the Jew I would become, and to the role I wanted Judaism to play in my life,” he said.

So the question is how he could bring that immersive engagement to his own community.

“Our synagogue has been growing for the past decade,” he said. “It’s mainly been with young families, and we have put all of our efforts into that demographic.” (The “we” Rabbi Olitzky talks about is the shul’s other clergy, professional, and lay leaders.) “But as these children have grown, we have realized how important — how essential — it is to keep them Jewishly engaged once they are post-b’nai mitzvah adolescents.

“We’ve been brainstorming how to do that, and we realized that Jewish camping world is successful at engaging this demographic, both as campers and then as counselors.

“And we realized that our teenagers are not here over the summer. They are at camp.”

So when Rabbi Olitzky put all these factors together — camp as the incubator for lifelong Jews, adolescence as the time when that passion is most effectively engaged, lots of adolescents in his congregation, most of them away for camp during the summer — he decided to hire a full-time teen programmer, and to talk to a colleague, his friend Rabbi Ethan Linden, the director of Camp Ramah in the Berkshires, about how best to work with that new staffer

The two institutions — the Camp Ramah network is a mainstay of the Conservative movement both in North America and around the world — decided to partner in this new enterprise. 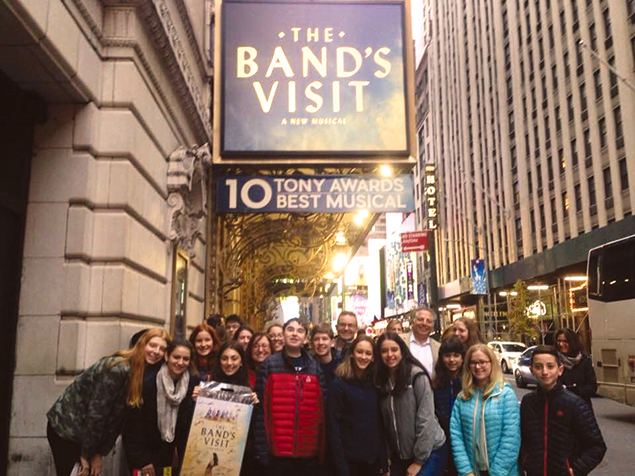 Camp administrators talk about 10 for two, Rabbi Linden said. “We work during the other 10 months of the year for the two months of utopia at camp.

“So we decided that we should be talking about two for 10,” Rabbi Olitzky said.

The two institutions are hiring a teen program coordinator who will work mostly for the shul except during camping season, when she will be at camp.

“For camps, this is a great opportunity to partner with a growing synagogue in our region that is thinking outside the box about the way they want to serve their kids and teenagers,” Rabbi Linden said. And it’s a way to offer someone who’s perfect for a camp a job during the year. “That’s the beauty of it,” he said. “Most synagogues’ youth programming in on hiatus during the year.”

Although most of Beth El’s teenagers go to camp, most do not go to Ramah. That’s something else that the partnership might change, although it’s far from its main goal, both rabbis agreed. “We have a shared goal of helping kids go to a Jewish summer camp, and for finding the right cap for each child,” Rabbi Olitzky said. “It’s really more about the kinds of partnerships that the Conservative movement is going to need if it’s going to thrive,” Rabbi Linden said.

Jewish camping is thriving across the Jewish world, he continued.

“We hear a lot about how you can bring camp to shul. Really you can’t, because the intensity of the camp experience makes that not realistic. But what you can do is bring the kinds of people who make that experience. And they’re near peers for the teens. That’s also part of the magic.” Counselors and most other staff members “are not impossibly old. They’re someone the camper can grow into being.

“And then they can bring back that love of Jewish community, that excitement, that energy, back to the congregation, year after year,” Rabbi Olitzky said.

He has hired a teen coordinator. Talia Feldman, 22, who has just graduated from the University of Delaware, will spend this summer at Camp Ramah in the Poconos, where she was a camper, and where she’d already agreed to work. Then she’ll go to Beth El, and next summer she’ll be at Ramah Berkshires.

Ms. Feldman “grew up in the Conservative movement,” she said; she lived in Princeton with her family, went to community day school, and then to the Golda Och Academy in West Orange. She’s been involved in both the Conservative and the larger Jewish community on campus; as part of Masorti on Campus “I was part of the team that started more regular Friday night, Saturday morning, and holiday services,” and she also did a great deal with Hillel. She majored in human services, focusing on counseling, with a clinical focus that involved lots of fieldwork, and minored in Jewish studies. “I’ve always been passionate about working with children,” she said; she’s spent most summers since she aged out as a camper working as a staff member at Ramah Poconos. Most recently, she was a rosh edah — a unit leader. She also worked for the National Ramah Commission as an intern and as a campus coordinator, bringing camp to school.

All in all, “when I first heard about this job, I thought it was too good to be true,” Ms. Feldman said. “It was the best of both worlds, working with kids in a synagogue setting and still having the camp component. I’m very passionate about camp. This is a great opportunity for me to do something a little different and still to have camp in my life.

“I am hoping to really connect with the teens, in whatever way that it happens,” she continued. “It might be one-on-one, or in small groups, however it works to connect with them, and to get them more involved in the programming that we will create together. Step One is getting to know them. I don’t want to do anything that isn’t exciting to them.”

There’s little more exciting than being right out of college and given the opportunity to create something new, using skills you already have and working in an area that you love. That’s what Talia Feldman is looking forward to, and what Rabbis Jesse Olitzky and Ethan Linder are thrilled to have put in motion.