A rampage by a hammer-wielding Teaneck resident in one of the town’s business districts is raising questions about the interplay of madness and bigotry.

He seemed to be looking to hurt Jews.

Jill Gordon of Demarest was in the bathroom with her 10-year-old daughter, whose stomachache had brought them to the pediatrician’s office.

“We were in the bathroom together when we heard glass break and screaming,” Ms. Gordon wrote on her Facebook page. “Someone yelled, ‘Call 911!’ I opened the door and saw a man in front of me holding a hammer with blood dripping down his arm. He ran towards us and yelled ‘Are you Jewish?’ I slammed the door shut and locked it then looked for a weapon.”

All she could find was a spray can of bleach, so she stayed in the bathroom and called 911.

“We heard the attacker yell, ‘Are you Jewish’ again followed by a scream then ‘They tried to turn me trans!’”

When the police arrived five minutes later, Mr. Cole had left the premises.

But police were able to follow the trail of his blood — dripping from the wound caused by the glass he shattered — and caught him around the corner on Cedar Lane, smashing the storefront window of a cleaners.

He was arrested and taken to Bergen New Bridge Medical Center in Paramus for a psychological evaluation, and from there to Holy Name Medical Center for psychiatric treatment. 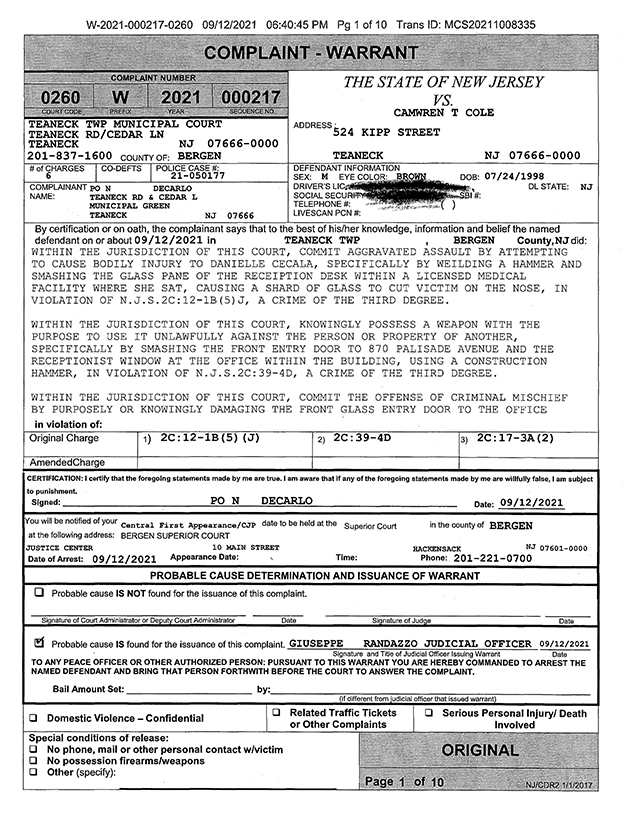 He was not charged with violating New Jersey’s so-called hate crime statute, which in fact criminalizes “bias intimidation,” namely, committing crimes “to intimidate an individual or group of individuals because of race, color, religion, gender, disability, sexual orientation, gender identity or expression, national origin, or ethnicity,” or knowing that the crime was going to intimidate people for that reason.

The Bergen County Prosecutor’s Office plans to take Mr. Cole into custody when he is released from Holy Name. Prosecutors can add to the initial charges if they choose.

Under New Jersey law, “A person is not criminally responsible for conduct if at the time of such conduct he was laboring under such a defect of reason, from disease of the mind as not to know the nature and quality of the act he was doing, or if he did know it, that he did not know what he was doing was wrong. Insanity is an affirmative defense which must be proved by a preponderance of the evidence.”

The attack in Teaneck comes less than two years after two fatal assaults on Jews in December 2019, in Jersey City and in Monsey.

The assailants in Jersey City, David Nathaniel Anderson and his girlfriend, Francine Graham, were killed by police after they murdered a police officer and attacked the JC Kosher Supermarket, killing its owner, an employee, and a customer. Anti-Semitic and anti-police social media posts linked Anderson to the extremist fringe of the Black Hebrew Israelite movement; New Jersey Attorney General Gurbir Grewal said that evidence indicated the attacks were acts of hate and domestic terrorism.

Less than two weeks later, Grafton E. Thomas invaded the home of Rabbi Chaim Rottenberg, where a Chanukah candle-lighting ceremony and party was underway, and began stabbing people. He injured five people; one, Josef Neumann, died after 59 days in a coma.

Investigators found evidence of ideas drawn from the Black Hebrew Israelite fringe, though Thomas’ lawyer issued a statement on behalf of his family asserting Thomas did not belong to any hate groups.

Thomas was charged with committing a federal hate crime, as well as state charges of attempted murder. Before New York could upgrade the charge to actual second-degree murder, a federal judge rule that he was incompetent to stand trial and ordered him hospitalized in a mental facility.

In his shouts of “They tried to turn me trans,” Mr. Cole seems to have alluded to an anti-Semitic conspiracy theory that advocates for trans people say began in far-right, neo-Nazi, and white supremacist circles. In 2015, the Occidental Observer, which claims to report on “White Identity, Interests, and Culture” and has been described by the Anti-Defamation League as “a primary voice for anti-Semitism from far-right intellectuals,” wrote that “the stunningly disproportionate Jewish involvement in the ‘transgender rights’ movement reveals it as yet another form of Jewish ethnic warfare.”

In 2018, as reported by the Progressive, “anti-trans feminist pundit Jennifer Bilek wrote a column for the Federalist in which she claimed to expose the ‘rich, white men institutionalizing transgender ideology.’”

Christa Peterson, a graduate student in philosophy at the University of Southern California in Los Angeles, said that the idea has spread further.

Writing on Twitter, Ms. Peterson said, “In her new book, the Economist’s Helen Joyce claims the trans ‘global agenda’ is ‘shaped’ by three Jewish billionaires. The sourcing is vague in the book, but she has previously cited Jennifer Bilek. Bilek has previously cited an explicit Nazi.”

The book, “Trans: When Ideology Meets Reality,” was favorably reviewed in the New York Times by Jesse Singal, a writer whose coverage of trans issues has repeatedly aroused the ire of the trans community, and who described himself in the review as a dining companion of Ms. Joyce.