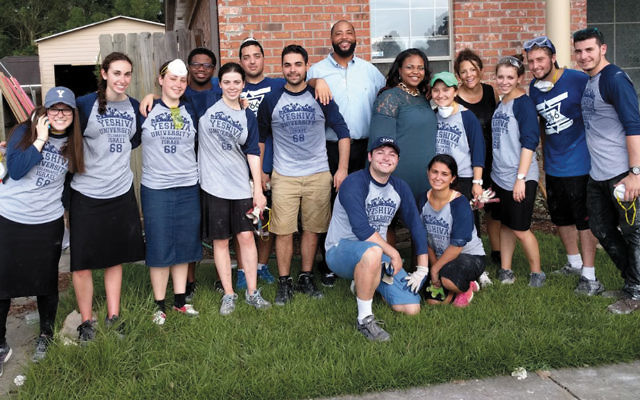 The group gathers in Baton Rouge before beginning its clean-up work. Yoni Mintz is the second from the right in the top row. (Courtesy Zev Behar)

A  space transforms into a place when a person adds meaning to it.

When you want to make a certain space your own, you work on it to make it uniquely yours. Such is the case with your home. Instead of being a random place, a home contains an abundance of personal items that make its owner feel at ease.

With these ideas from a recent interdisciplinary college course I took running through my mind, I looked with dismay from my car window onto the flood-ravaged streets of Baton Rouge, Louisiana. I had come there for the Labor Day weekend with 11 Yeshiva University undergraduate students and two staff members. We were working with Nechama, a Jewish relief organization, to help flood disaster victims.

Outside nearly every house we passed, we saw a huge pile of what suddenly had become trash. Much of this trash consisted of items that just a few weeks earlier had sat serenely in the homes. Places where kids normally would enjoy their front lawns, neighbors would wave hello to each other as they passed, and lives were happily lived, now were strewn with remnants of what used to be. Fridges, ovens, clothing, dolls, toys, food, computers, and beds were just a few of the pieces of rubble that we saw. The things that once made these houses into homes were now lying in disarray, abandoned by the curb.

We arrived at the first of the houses where we were to work, not knowing what to expect. After catching a whiff of the heavy stench of mold that we soon would become habituated to, we were given masks and gloves to wear at all times inside. Our job in that house entailed removing all the items and ripping out the floorboards. Teddy bears, pictures, canned food, clothing, doors, and cabinets were brought out of the house, mostly to the curb. If any items were salvageable, we put them to the side, in order to give the homeowners back as much as possible.

After sitting in water for several weeks, many items in the houses became waterlogged and extremely heavy. Removing dressers and beds, which ordinarily would have been easy, became a difficult challenge, even for a large group of able-bodied people. For example, we had to maneuver heavy beds back and forth, turning them as needed, while still maintaining a firm grip on them. With six people hugging onto each bed with all of their might, the beds finally made it to the curb. Puddles of moldy water trailed behind them. 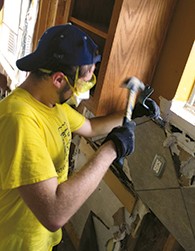 Other houses had further challenges. For example, we had to take down moldy drywall, leaving the bare studs. New drywall soon would replace the old. In college, I had spent two winter breaks working for Habitat for Humanity, building homes from scratch for indigents. I reflected on the contrast in the experiences of those people helped by Habitat for Humanity and the people we were helping in Baton Rouge. While people who got new homes with Habitat were starting fresh, those being helped by Nechama would be moving back into houses that once contained the many items that made it their homes. Those items were lost forever. Those people also would have to start anew. I considered their task to be the more difficult one, given all that they had lost and the void that they had experienced.

On our final day we were challenged by a house that had not yet received assistance from any flood relief team. Everything had been left in the house; it was as it had been before the flood. We quickly learned what that meant. A fridge became our main enemy. Food that under normal circumstances would have rotted in a few days in a non-operating fridge now had been sitting in such a fridge for several weeks. Suffice it to say, the smell alone would have made it a most unpleasant and difficult day. Six students dragged the fridge on the warped slippery floor from the kitchen to the curb, making sure to keep its doors closed at all times.

As difficult as removing the fridge was, there was another aspect of this house that made this day all the more memorable. Ms. Patt, the homeowner, was in the driveway, cheering us on every step of the way. As we brought out boxes from the house, Ms. Patt came over to inspect every item, desperately seeking something to salvage. It was heartbreaking to see her face light up when she saw items that had much sentimental value, only to realize that they were not salvageable. Yet there was some relief as she still was able to share with us the background stories of these items.

Inside Ms. Patt’s house, at one point I was tasked with removing items from a high shelf. One item in particular was heavy and difficult to remove. It was an old typewriter. Once I got it, I was filled with excitement. I knew that this item would be sentimentally important to Ms. Patt, and that it could be salvaged. When she was given the typewriter, Ms. Patt’s face lit up. It was as if she had been given a piece of her life back.

Returning to my room that evening, I took off my t-shirt, which once had been bright yellow but was now totally black from the mold. I thought about how we had just given many flood victims the chance of restarting anew. The homeowners in one of the houses where we worked were expecting a baby in the coming months. While a terrible tragedy had befallen them, they had much to look forward to in their upcoming journey as parents. Ms. Patt also had started looking to a brighter future, as she invited the whole group to come back in the spring to enjoy the community’s annual crawfish bake with her. Life would go on as those in her community looked forward to better times.

Humanitarian aid is a passion of mine that I always have been interested in. I always have had the urge to help others less fortunate than me, thereby carrying out an important Jewish value. I am thankful that Yeshiva University has given me and others the opportunity to help others, one at a time.

Jonathan (Yoni) Mintz of Fair Lawn is a senior at Yeshiva University. He plans to enter a graduate program in psychology, and to take time off for a humanitarian aid mission in a developing country.