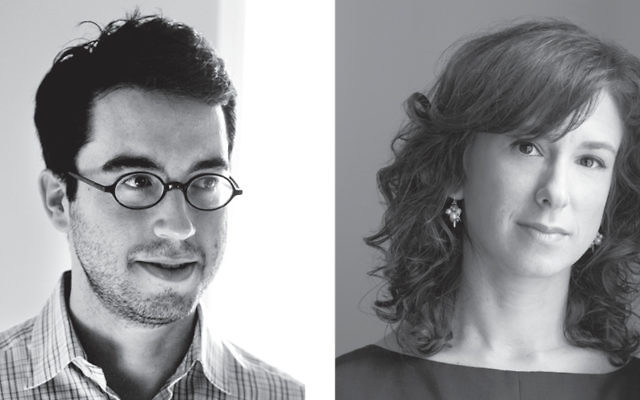 If Israel went to war with all of its neighbors and its prime minister called on all the able-bodied Jewish people worldwide to come and fight, would you go?

Would you send your children?

That’s the question attendees of “Brooklyn by the Book” were asked last Tuesday night at Congregation Beth Elohim in Brooklyn. The event brought together two A-list writers — Jonathan Safran Foer, author of “Everything Is Illuminated,” and New York Times correspondent Jodi Kantor — for a conversation about Judaism and literature. The focal point was a discussion of Foer’s latest book, “Here I Am,” published last week.

Kantor’s questions about the book, a multigenerational Jewish family saga set in Washington D.C., took a turn toward Judaism from the get-go. “Some people read it as a novel about Judaism, some as a novel about family,” she said. She asked if the book is primarily a Jewish work.

Foer’s demeanor is philosophical. He peppers his descriptions with rhetorical questions, some age-old, some you’d recall from college classroom days. He speaks calmly and authoritatively, like a professor you might develop a crush on as an undergrad. His answer to this question was as complex as the plot of the novel: yes and no.

Undoubtedly, “Here I Am,” which explores the experience of being the descendants of Holocaust survivors in America, is a work about modern Jewish American life. The title comes from Genesis, a line Abraham says to God when God calls on him to sacrifice his son Isaac. The phrase — “hineini” in Hebrew — is repeated several times in the Torah, a frequent response by God’s disciples affirming their readiness to serve.

Nor is this Foer’s first work on a Jewish topic. He wrote “Everything Is Illuminated” while studying at Princeton; his adviser was Joyce Carol Oates. The novel follows a young Jewish protagonist who travels to Ukraine to find the woman who helped his grandfather escape the Nazis. Foer won the National Jewish Book Award for “Illuminated” when he was 24; he is now 39.

Foer lived in Brooklyn as an adult with his family for years, and he sent his children to Beth Elohim for Hebrew school. And this is his second novel about a Jewish American family. Yet Foer doesn’t identify strongly as Jewish, he says — at least, not in his everyday life. “Nothing surprises me as much as my Judaism,” he said. “I don’t have a Jewish identity when I’m not writing.” When he is writing, he added, “it’s irrepressible.” 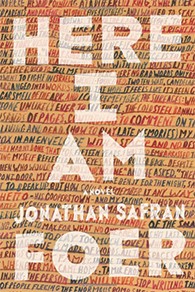 Like so many American Jewish intellectuals, Foer’s relationship to Judaism is thoughtful and complex. “The experience of American Jewry is the experience of seeing things you can’t see. I can say the prayers, but I don’t know what they mean. It’s a shallow relationship to religion, but at the same time it’s very deep. It affects the subconscious.” Even sitting on a bimah discussing his work among a Jewish audience evoked Foer’s earliest memories of Jewish culture, which he described teasingly. “Here everything is commemorated, everything has to be in someone’s honor. There’s a lot of throat-clearing in synagogue life.”

Israel came into the conversation quickly. After a fictional earthquake in “Here I Am” destroys much of the Middle East, Israel is attacked by its Arab neighbors on all fronts, closely mirroring the 1948 war. In the aptly named “Operation Arms of Moses,” the unnamed prime minister gives a televised speech calling on Jews worldwide to fly to Israel to defend the Jewish homeland. Jodi Kantor paused the conversation then and asked for a round of hands: how many of us, sitting comfortably in that audience, would answer such a call?

A mixed crowd packed the main sanctuary of Beth Elohim — small groups of Park Slope baby boomers, mothers with their 20-something children, and a smattering of bookish Brooklyn hipsters. Ten or so shot their hands into the air.

His answer makes sense to me, and I relax, feeling less like a coward for not raising my hand.

Discussion turned to the portrayal of Israel in the novel, which is vaguer than the one most Americans hear on the news. “Most people my age would say, ‘I’m more comfortable with the Israel of my youth, I’m uncomfortable with the treatment of Palestinians and Netanyahu’s government.’ Which Israel is in this book?” Kantor, 41, asked.

“In the book, the struggle over Israel is existential, not political,” Foer responded. “I think Israel is primarily problematic for American Jews when they’re in front of company” — particularly non-Jewish company.

For the American Jewish people, “the end of Israel signifies the end of possible futures, but also the end of the past.”

Questions of scale, of the global and the local, fascinate Foer. His book forces its readers to consider how much you care about Israel versus how much you worry over a passing remark at the dinner table. In “Here I Am,” two such crises frame the work equally: one personal, one distant. A secret cell phone with sexual texts leads to the end of a marriage, while an earthquake in the Middle East destroys Israel.

Kantor and Foer moved on to discuss Jewish history. Like his character in “Here I Am,” Foer is the grandchild of a Holocaust survivor. Jodi Kantor asked how Foer’s own children learned about the Holocaust.

Like so many Jewish children, Foer’s children heard stories from their grandmother, saw images and films, and read about the Holocaust even before they formally studied it in school. “It was planned so that they learned about it without my being able to remember how they learned about it,” he said.

It’s certainly no coincidence that the oldest member of the family portrayed in “Here I Am” survived the Holocaust, while the youngest members watch the existence of the Jewish people threatened once more, this time in Israel. Foer brings the worst possible calamity many American Jews can consider to life. If your worst fear for your family came true, be it the destruction of your faith or divorce from your loved one, how would you face it?

Luckily, when you read Foer’s book in the privacy of your living room, no one will ask you to raise your hand to answer this question out loud. But it’s one he feels you should consider anyway.