In his latest book, Dr. Michael Fishbane offers a theology that is both traditional and modern.

How can you write about a spiritual force you understand to pervade all of existence and provides meaning to your daily life yet ultimately is invisible?

And yet, if you’re a teacher and a writer and a thinker, how can you not?

That’s the paradox confronting theologians. And it’s the paradox at the heart of Dr. Michael Fishbane’s latest book, “Fragile Finitude,” published this year by the University of Chicago Press. As the book concludes: “At its core, theology is a prayer of the unsayable—a language of longing and limit.”

Dr. Fishbane, 78, is the Nathan Cummings Distinguished Service Professor of Jewish Studies at the University of Chicago, where he has taught since 1991. Four years ago, he and his wife, Mona, relocated from Chicago to Teaneck, where one of their sons, Eitan, a professor of Jewish thought at the Jewish Theological Seminary, lives; their other son, Elisha, who teaches medieval Jewish history and culture at New York University, lives in Highland Park. (The one in New Jersey, not the Chicago one.) Until the pandemic made classes virtual, Michael Fishbane commuted to Chicago weekly.

His new book “is my attempt to formulate a contemporary Jewish theology both grounded in classical traditional Jewish sources and their interpretation, but also attentive to the challenges and conditions of modernity,” Dr. Fishbane said. It is a way to explain and justify “living within the sphere of mystery and tradition” — that is, living a Jewish life.

The path of peshat, the simplest interpretation, leads to a discussion of “our physical and embodied experience of the world,” he said. “It uses traditional Jewish sources to talk about what it means to be attentive and alive, and to feel oneself as a fragile creature who lives and dies. It’s about our universal relationship to experience and experience and opening up to a perspective on God. That’s a universal experience.

“The shift toward derash” — rabbinic interpretation — “is that as individuals we are also part of a community. We live at a communal level.

“In peshat, one would simply wake up to one’s feelings of the day in a natural and physical sense. In the level of derash, one wakes up with prayer and awareness through the language of tradition,” he said.

Thus, the section of “Fragile Finitude” devoted to derash “tries to deal with the full range of living experience in relationship to God, the notions of revelation and spiritual action.” 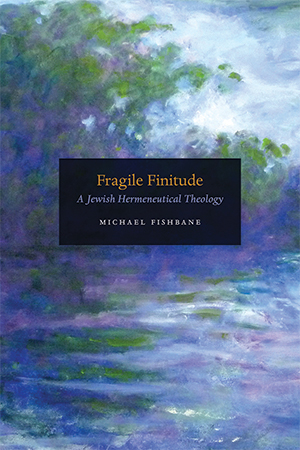 Then there’s the third level, remez, “which is traditionally related to philosophical allegory” and that in his book Dr. Fishbane uses “to return back to the person in terms of one’s inner spiritual growth.” After starting at the universal level and then discussing community and tradition, “what’s left for the individual in terms of their own spiritual growth? I draw on the full range of rabbinic and chasidic traditions to talk about spiritual development.”

Finally, there’s the fourth and high level, sod, the arena of mysteries. For Dr. Fishbane, this means “a cosmic perspective. We’re not simply embodied people — peshat — or members of communities — derash — but we also live in the fullest cosmic divine context.”

As he writes in that section: “One’s mind may be transfigured by focusing on God’s presence in the core of the heart; and, so doing, one’s heart will be conjoined to the manifold of heart-points that instantiate our worldly (divine) reality.”

In echoing these traditional categories of interpretation, Dr. Fishbane sees himself as grounding his theology in traditional forms, while also being true to a core idea of modernity: “As contemporary Jews, we live and interpret life at multiple levels of experience and multiple levels of consciousness. We live simultaneously in universal ways — something we share with every creature on the planet — and we also live on a level of communal and historical consciousness with a particular form of sanctification.”

In his youth, Dr. Fishbane studied at Brandeis with a leading student of two of the premiere 20th century Jewish theologians. Nahum Glatzer had studied with Martin Buber and Franz Rosenzweig in Germany, and he was Rosenzweig’s preeminent translator and interpreter. Dr. Fishbane sees his work as building on that of those two pre-War German Jewish philosophers.

“Rosenzweig and Buber were part of the linguistic revolution in philosophy that took place at the beginning of the 20th century,” Dr. Fishbane said. “They understood that we live in language, we interpret the world in language, we interpret scripture in language. They grounded religious life in scriptural interpretation as a form of reconnection with the mystery of God. They attempted to reengage the traditional sources, so they became a living voice. They made the bold claim that historical scholarship has to give way and give room to the immediate voice of how one lives and appropriates the tradition.”

It took much of his career for Dr. Fishbane to feel confident enough in his personal grounding to return to theology. His doctorate was in biblical studies. “I was fully engaged in biblical studies in the context of the ancient Near East,” he said. His dozen earlier books include biblical interpretation as well as studies in midrash, classical commentaries, and mysticism.

At Brandeis, he forged a lifelong friendship with another student who also became a theologian: Rabbi Arthur Green. Both were members of Havurat Shalom, the influential experiment in countercultural Jewish community. Both found meaning in chasidic thought; Rabbi Green has published many translations of chasidic thinkers and Dr. Fishbane uses many chasidic passages in “Fragile Finitude.”

Theologically, though, they have reached different conclusions; Rabbi Green embraces “Radical Judaism,” as one of his books is titled. It is a neo-chasidism predicated on personal choice. Dr. Fishbane is a traditionalist who is a member of an Orthodox congregation. “We reflect two different paths,” Dr. Fishbane said.

So who should read “Fragile Finitude”?

Someone “who wants to live within the tradition but with their eyes wide open to the modern world and its challenges,” Dr. Fishbane said. “It offers a language to think about God and revelation. My ideal reader wants to live with integrity in all areas of their life, but Jewish consciousness, Jewish observance, and Jewish studies is central.”