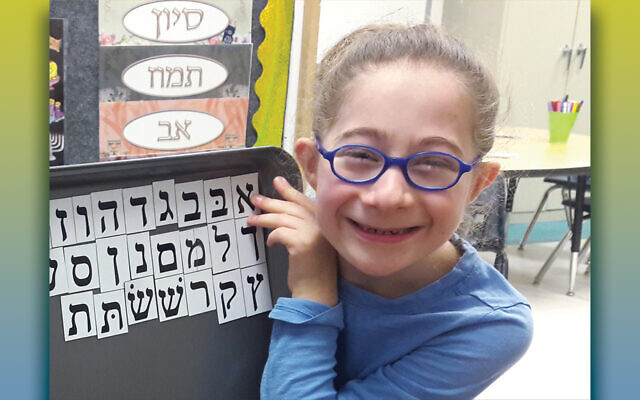 Our weekly parenting group meeting was rolling along as it usually did – chit-chat, joking, complaining, noshing – when my phone rang, and I immediately excused myself to speak in private. It was our daughter Racheli’s genetic counselor, and she had news that changed everything for us in an instant.

I struggled to take in the information that she was telling me: that our 9-month-old daughter had extra information on one chromosome and was missing information on another; that as far as the experts knew, Racheli was the only one in the world with this exact genetic make-up, a fluke rather than something she had inherited from us; that she was one in a million – actually, more like 1 in 7.5 billion. The genetic counselor explained that the doctors did not have much definitive information in our case, but they could offer us lots of “maybes.” Maybe Racheli would have difficulty learning or developmental delays, maybe a growth disorder, heart defects or visual deficits, and maybe more…but they couldn’t be sure. As I hung up, lonely thoughts permeated my mind; our daughter’s future was unknown. Swirling with fears and questions, I walked back to my parenting group, and at that moment, I felt like an outsider. My social outlet suddenly seemed to be of a different world.

Over the next two years, our home would become a revolving door of therapists: feeding specialists, speech therapists, OT’s, PT’s and play therapists. Eager to be a big girl like her brothers, at 3 years old, Racheli was off to public school to learn her letters, numbers and hopefully make friends. But we soon discovered a new big problem: Racheli had selective mutism. She did not speak in school. Selective mutism is a severe anxiety disorder where a person is unable to speak in certain social situations, such as with classmates at school or to relatives they do not see very often. While we had been prepared for several medical conditions Racheli might develop, selective mutism was not on the list.

Racheli continued in the special education program in our local public school, but over the years, school became more and more challenging for her; the selective mutism was preventing her from learning and developing friendships. Time was going by, and Racheli still was not reading and could barely do math. Because our daughter was so quiet and agreeable, her needs were ignored by the teachers, as their energy was dedicated to managing the disruptive kids in the class. One day my husband Levi picked Racheli up from school and found her sitting alone during gym, ignored by the teachers and her peers. My heart ached. It became clear that Racheli was suffering, and we needed to make a change. We were desperate to move Racheli to a school that would be more adept to educate her, help her interact with her peers, and give her the love and attention that she deserved. How incredibly grateful we were the day we were introduced to SINAI Schools.

From the moment Racheli entered SINAI School at RYNJ in second grade, we felt that we had entered a family. It was as if Racheli had a community of aunts and bubbies and friendly next-door neighbors acting as her teachers, loving her, and welcoming her with open arms. It took several months, but slowly as the year went on Racheli began speaking in a soft whisper, and then progressed to speaking in a loud whisper where the teachers were finally able to fully communicate with her. That first year at SINAI, Racheli didn’t stop smiling…then giggling…and then laughing her contagious laugh.

The following September, Racheli’s teachers were in for a big surprise. She walked into school on the first day speaking in her full voice, something none of them had ever heard. Her teachers from the previous year would quietly listen by the door to capture the voice and giggle of the little girl who could barely whisper only a year before. As time passed, Racheli’s confidence grew, and she blossomed into the role of mayor of the classroom, always aware of the classroom happenings, always concerned for others. She was the one to remind the teachers who was in need of a sticker reward, to help her classmates find lost objects, to keep the peace between friends who were arguing.

Racheli had found her voice.

It delighted us all that over time, new classroom goals had to be put in place to modulate her now passionate and outspoken voice! She was building friendships and having playdates regularly, progressing in math, reading English and Hebrew, davening from a siddur, and reminding everyone “not to speak lashon hara because it will hurt your neshama.” The girl who finally had found her voice had become so careful with her speech, never wanting to hurt anyone else’s feelings.

Racheli is now in her 5th year at SINAI and 11 years old. When it came time to start thinking about her Bat Mitzvah, we decided to learn something special together. What an incredible hasgacha prati moment, a direct message from HaKadosh B”H, to discover that Racheli shares a birthday with the Chofetz Chaim. Our unique, loving, kind daughter, who lived most of her life without speaking, who now is so sensitive not to speak lashon hara, shares her birthday with this great man, who is most known for his works on the laws of proper speech.

And so, she and I are learning the works of the Chofetz Chaim together for her Bat Mitzvah. While our journey is never over and we know we will continue to have lots of challenges to overcome, the child who once could not speak asks to learn and is able to learn with me.

None of this would have been possible without all the love, support, and guidance of all the teachers, therapists, and staff at SINAI, who helped transform Racheli from a whisper to a girl who found her voice.

Jill lives in Teaneck with her family: Racheli, two older brothers who go to TABC, and her partner in life and husband of 20 years, Levi. She is a physical therapist and national board-certified health and wellness coach.