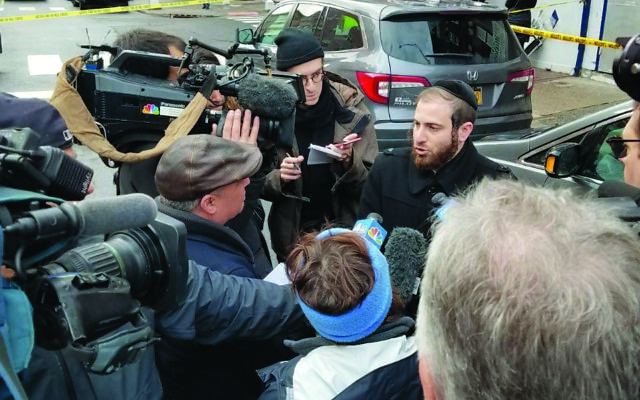 Yossi Steinmetz lives in Boro Park, but he does a lot of work in Jersey City, and he knows just where to go for his coffee.

On Tuesday, at about 11:25, he went to JC Kosher Supermarket to get some caffeine. “Fortunately for me, the coffee machine was off, so I went next door to grab a coffee.” Next door was a shul, called the Greenville shul, with a boys’ elementary school, called Moses of Greenville, on the second and third floors. There’s a coffee machine on the ground floor, and that’s where Mr. Steinmetz headed.

He was in the shul’s front room, when the men in the back room “came running out. They looked white.” One of the men was Moshe Ferencz. He and his wife, Leah Minda Ferencz, owned the store; he’d left to daven, but his wife was still there.

“We heard shots for about five minutes. They were constant. We figured it must have been a gang shooting. I told him ‘Call your wife,’ and he kept calling her, to tell her to lock the door. But she didn’t answer.

“So after about 10 minutes, I said, ‘Okay, let me run into the grocery shop.’ I was standing by the front door of the shul, ready to walk over to the store, to make sure she was okay, and then there was another gun burst.

“It was so loud. I could hear the bullets. Each bullet. And he was frantic. He kept calling his wife, the workers, the grocery store land line. Nobody picked up.

“So then he said okay, let’s go in through the back door.” There were two fences to jump over, and Mr. Steinmetz wasn’t sure what to do. It was frightening, he said. “But he is a big guy, and he couldn’t really make it, and I’m a thin guy. I could. So I jumped over, and I got in.” He was by the store’s back door.

“So I saw a man lying face down on the door jamb. He worked there, a Spanish guy; I’d bought something that morning, and I’d just paid him.” He was Miguel Jason Rodriguez. “And I saw him face down on the floor, the door was a little open, and I knew that I wasn’t going to go in there by myself.

“I am like, ‘Man, nobody is walking out of that place alive.’

“So I went back to the shul. I didn’t want to tell him” — Moshe Ferencz — “exactly what I saw. I said that I saw a guy lying face down, and he was probably pretending to be dead. But I knew from the way he was lying there that he was dead. And then the shooting didn’t stop. I knew that no one inside could be alive.

“After I came back, we locked the back doors and barricaded them. And from about 12:30 on I would say the shooting was going on constantly. It was like clips of battles in Afghanistan. And it was so loud! And it feels that time goes so slowly.”

“One thing I am still wondering is how come the cops didn’t secure the backyard.”

By the time the shooting ended, no one was in the shul on the first floor any more, he said; there had been four people there, but they all ran upstairs and locked the doors to the school, with its rabbis, teachers, and 6- to 12-year-old students. “We took them away from the front windows so they shouldn’t hear the gunshots,” Mr. Steinmetz said. Still, the kids knew something was wrong. “They constantly were asking what was going on.”

Finally, “the cops busted the shul doors open,” he said. “They came in with their guns drawn. It was scary.

“The principal of the school ran down to them to let them know that there were kids on the top two floors. The first cop who ran toward him was plainclothes, not in uniform, and he didn’t identify himself. The principle was terrified. He started yelling ‘Don’t shoot! Don’t shoot!’ The teachers upstairs were terrified too; they thought that maybe it was the shooters from next door. They barricaded themselves in. No one wanted to open the door.

“I was on the third floor. I opened the door, and when I did a cop came up with his gun drawn, so I ran back in and closed the door. He said ‘Come back out with your hands in the air.’ I came out. He had his gun pointed at me. I said ‘Don’t worry. Nobody is up here.’ He started yelling, and I said ‘Calm down. There are a lot of kids here.’”

What he saw seemed entirely chaotic, Mr. Steinmetz said. “It didn’t look like there was so much coordination there, but I give them the benefit of the doubt. There was a lot of shooting with a high-powered rifle. They couldn’t take the chance.”

Next, “the police walked us through the back door, and took us four blocks away. I never in my life saw so many cops. Blocks and blocks of cops. Jersey City cops, SWAT teams, NYPD, state troopers, so many of them.

“When they took us out of the building, I was standing next to the owner, Moshe Ferencz. I spoke to the cops, asked them if I could talk to someone in charge, because this is the store owner. But they didn’t want to talk to us.

“Much later, someone, I’m not sure who, came to pick him up. By then they knew who he was. They took him and his kids — I’m not sure if there were one or two who were in school there, he lives in Jersey City — and they started talking to him.”

That’s the last that Mr. Steinmetz saw of Mr. Ferencz.

How is Mr. Steinmetz feeling, the day after the shooting? “I’m okay,” he said. “I’m doing okay. I know that I still didn’t get in my head what happened. I purposely am not seeing any news. No news about it. So I am good. I am calm. And I am sure that in about a week or two it will hit me, how close to death I was.”