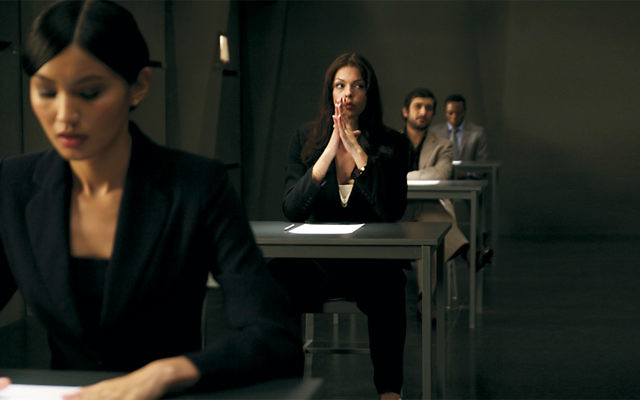 A scene from the thriller “Exam,” the movie featured in Dr. Wendy Zierler’s presentation.

“Exam” is a thriller, an English film released in 2009. It’s about eight people enclosed in a small room, in unexplained and therefore even more terrifying conflict with each other, a sort of “Lord of the Flies” crossed with  a “Twelve Angry Men” pulse-raising plot.

There’s nothing obviously Jewish about it.

And yet it’s the film that Dr. Wendy Zierler will discuss at a meeting of Minyan Tiferet, the partnership minyan in Englewood, this Sunday.

Dr. Zierler is the Sigmund Falk Professor of Modern Jewish Literature and Feminist Studies at the Hebrew Union College — Jewish Institute of Religion in Manhattan, one of the Reform movement’s main rabbinical seminaries. She’s also a member of the Hebrew Institute of Riverdale, the modern Orthodox shul headed until recently by Rabbi Avi Weiss, and she is a member of a partnership minyan there. (A partnership minyan allows women to lead the parts of a service that do not require a quorum of 10 men, and it occupies the leftmost corner of the Orthodox world.) Her understanding of the Jewish world spans the movements, and she says that she is comfortable, to varying degrees, in different ways, in all of them.

What does this have to do with the movies?

“For many years, I taught a course called Reed Theology at HUC,” Dr. Zierler said. “I was asked to teach it by Eugene Borowitz.” Rabbi Borowitz, who died in January, was one of the Reform movement’s best known, best respected, and best loved theologians, and his influence is felt far outside his movement as well. When he asked her, then a new Ph.D., to teach with her, Dr. Zierler was both flattered and intimidated. “I had to figure out why he was interested in pairing with an Orthodox literary person,” she said. She took up the challenge.

“Dr. Borowitz had the idea that we should be engaged in the culture, in finding out what is out there and making it meaningful in a religious way,” she continued. 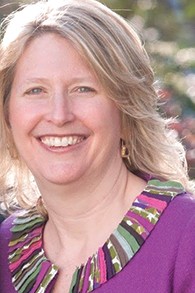 “That’s the method used in classical midrash. Often the rabbis, when they were doing an exegesis of a verse, would say what they thought it meant, and then follow it with a parable.” But sometimes it could be reverse engineered, using what she and Rabbi Borowitz called “inverted midrash.” Start with the story, and then get it back to the text. Not only is that a way to introduce texts with which people might not be familiar, it is also a way to see them freshly, familiar or not.

So there they were, a venerated, elderly Reform rabbi and an up-and-coming young modern Orthodox feminist scholar, both defying stereotypes, learning from each other. The two became very close.

“Gene was the belief man, and I was the text woman,” Dr. Zierler said. “In a way, that was ironic, when you bring your preset notions about being Reform or Orthodox. The Reform movement now is trying to do more God talk, and Gene did a great job of getting rabbinical students to talk about what they believe, and to get them to take it seriously.

“Exam” is about a test, both literal and metaphoric. “So in the film, you take this corporate instance of testing, and it becomes an occasion to think about what tests mean. Why do we student our students? Our employees? Our children? Our culture? And what does Judaism say about tests?

“The class at Tiferet will be an analysis of the film, but then it will look at the Jewish traditional and literary approach to tests. It will include some rabbinic examples, but generally speaking it will all go back to the Akeidah” — to the Binding of Isaac. “Abraham was repeatedly tested — to what end?”

Studying cinema as text largely has been a Christian enterprise, Dr. Zierler said; even the title she uses, “Reel Theology,” with its obvious and satisfying pun, “has been overdone in the Christian world,” she said; there are dozens of books about the theology of film. Why? From all the way back to the beginnings of the movies, “the theaters were seen as the new temples. One of the puns that’s used frequently is ‘sinema.’ They were worried, from the beginning, about trying to police what was in the movies.

“Jews were making the movies and acting in the movies, but they did not write about it in the same way. And that was not because they didn’t go to the movies. I can only speculate about why, but it might be because theology isn’t a Jewish science. Jews do not tend to wax eloquent over creed.”

Dr. Zierler identifies as a feminist, and there is feminism in “Exam.” “I don’t want to say too much about the film, because it is a thriller, but there is one woman in it who is important insofar as the film is offering a message about what sort of virtue ought to be commended,” she said. “This woman becomes an exponent of that virtue, and I use it as a way to challenge a certain way of thinking that lauds Abraham for his detachment, for clinging to God and separating from his family. I offer a feminist-oriented reading of the Akeidah that basically looks at Sarah’s unspoken role in it.”

Dr. Zierler has written a book, due out next year, called “Movies and Midrash: Popular Film and Jewish Religious Conversation.” It offers close readings of 12 movies — her text — and explores one religiously significant theme for each. The chapter on “The Truman Show,” for example, looks at the concept of truth; “The King’s Speech” looks at what she calls “speaking God’s word,” and “A Serious Man” is about “parables of Jewishness.”

“It’s about Jewish engagement with popular culture and secular society,” she said.

Dr. Zierler said that the best way to get as much as possible from the program at Tiferet would be to watch “Exam” before her talk — it’s on Netflix — although she will show clips during the evening.

Oh, and she also likes the movie. “I only teach about films I like,” she said.

What: Will teach “Akedat Yitzchok: A Feminist Interpretation”

Where: At a private home in Tenafly

How much: Suggested donation is $10 per person

For more information: Go to minyantiferet.com