On his deathbed, an actor supposedly said: “Dying is easy. Comedy is hard.”

Though the statement’s apocryphal, it neatly sums up Judy Gold’s philosophy. In fact, according to the Newark-born, Clark-raised comic’s new book, political correctness has made stand-up harder than ever.

In her new book, “Yes I Can Say That: When They Come For the Comedians We Are All In Trouble” — due out on July 29 — she posits that pretty much any subject is fair game. Or at any rate it should be, as long as it’s funny.

In a lengthy phone conversation that included references to everyone from Samantha Bee to Louis CK, she quoted a George Carlin line: “I think it’s the duty of the comedian to find out where the line is drawn and cross it deliberately.”

Cross it? I bring up one of the people Gold mentions in her book, Samantha Bee, who, I believe, not only crossed the line, but stomped it on the way.

Last year on her TBS show, “Full Frontal,” Bee called Ivanka Trump “a feckless c—t.” Trump had posted a clueless look-at-how-great-my-life is photo on line in the midst of a border crisis where young children were separated from their parents and caged in deplorable conditions. 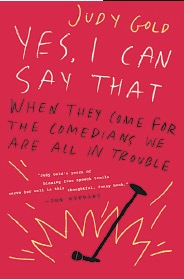 Still, the C-word seemed not only overkill, but a word I assumed had been relegated to the vocabulary dustbin. Yet Gold defended Bee, writing that Samantha had used that word many times before on the show without controversy. She “wanted to take the word back from the misogynists,” Gold wrote, while conceding that name-calling distracted from the point Bee was hoping to make.

Then, in our conversation, she made another point that struck home: “There are so many right-wing radio show and TV personalities who lie and say the most horrible things, and they’re still on the air. I don’t think it’s right to hold comedians to a higher standard than politicians.”

Then our discussion moved from public utterances to private behavior. I wondered how you separate the artist from the art. “You have to separate them,” she said. “But here’s the thing. That’s harder with comedians, because their routines are so personal. It’s such an intimate art form, it’s hard for people to separate the art from the person.

“Having said that, I grew up in a household where no Ford cars were allowed because Henry Ford was an anti-Semite. No German cars. I still find it so hypocritical about people buying Chanel. Coco Chanel was a Nazi.”

Yet she personally understands the concept of different strokes. She makes a distinction between Mel Gibson and the comedian Louis CK. “People tend to overlook wrong doings if it’s not so personal to them,” she said.

Obviously, society is changing rapidly. Gold sees those changes reflected in her audiences. Presidents always have been the target of humorists, she notes — until now. “You can’t even make a joke about Trump’s hair” in comedy clubs. “His supporters have no sense of humor, and they will hate you for the rest of the show.

“If I say any sort of Trump joke, guaranteed someone will come up to me and say I used to be a fan of yours. I’ll tell them, what are you talking about? I’m still funny.”

Audiences know her now, and know what they’re going to get, Ms. Gold said. “I feel the [hateful feedback] is a lot more anti-Semitic than it is homophobic. There’s just been an uptick. I can’t even tell you the amount of anti-Semitism I have to deal with. My mother used to say they all hate us and we’ll be blamed for everything, and she was 100 percent correct.

“It comes through on Twitter. There are so many people I’ve had to block.”

Of course, the coronavirus has pretty much put an end to in-person performances. Some still happen, though. Ms. Gold and several other comics recently performed from the back of a flatbed truck at a Queens drive-in. People sitting in their cars would “laugh by blinking their lights. It was ridiculous. Come on, Audi, what’s wrong with you? Why aren’t you laughing?”

Night clubs will take a while to return, because audience members will be “sitting on top of each other, their mouths open, laughing.” Ms. Gold much prefers the thought of a big theater that will offer only half its seats for each show. “It will be the first time I sold out a big theater,” she said.

Ms. Gold grew up in an observant Jewish house: Shabbat dinners, shul every Saturday, a succah in the year every year. By the time she was 13, she stood six feet tall, towering over classmates and even the rabbi at her bat mitzvah. “It was not what every adolescent Jewish girl in New Jersey dreamed of in 1975,” she said.

Kids made fun of her. They called her Big Bird. It was, she says, one of the reasons she chose a profession where she decides what makes people laugh. Then there was the secret. She is gay, something she recognized, she said, when she was five or six years old. In her hit off-Broadway show, “The Judy Show: My Life as a Sitcom,” Ms. Gold told a very moving story about her father and her sexuality. I asked her to repeat it:

“I must have been 26 and my father asked me, we’ve never talked about this, but do you have a boyfriend,” she said. “I said no. Well, do you have a girlfriend? And I said no. He told me, you know there are parents who have kids who are gay or bisexual and they still love them.

“We were not a lovey-dovey family. A clever quip. A quip. That was us. That was his way of saying I know and I love you.

“It would have been nice to talk to him about it, but I wasn’t emotionally ready.”

It reminds us of her book’s subject: “It’s so incredible on so many levels that people are afraid to say things,” Ms. Gold said. “Seasoned comics come to me and say do you think I’m going to get into trouble for this joke or that joke? We’ve got to cut this P.C. stuff out.

“When we start telling people it’s not okay to discuss this or discuss that, that’s when we get into trouble.”