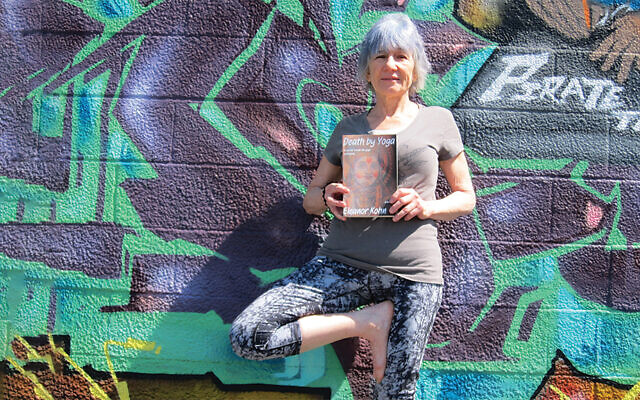 Eley Kohn of Teaneck has wanted to write a book since she was 14. Ten years ago, she settled on the topic. Now — OK, it took a long time — that book, “Death by Yoga,” has been completed and published.

In Ms. Kohn’s case, the delay is totally understandable. After all, there’s not much time in a full and busy life for hours spent poring over a manuscript.

In fact, that’s part of the reason it took so long, Ms. Kohn said. A naturally sociable person, she didn’t enjoy closeting herself away to write. She also had a fulfilling job, two children to raise, and community organizations to support.

Ms. Kohn had been a teacher, but for more than 11 years she been the program director at the Federation Apartments in Paterson. She chose that Paterson job because she thought some of the skills she had developed working with young children might come in handy working with seniors. Obviously, the directors of the facility agreed.

“When I started there, Jews made up 80 percent of the residents,” she said, and many of her programs had Jewish content. She organized a Tu B’Shevat seder each year, helped arrange Shabbat and Yom Tov services, ran a model seder pre-Pesach, and ensured that programs were held for Chanukah and Purim as well.

With time, however, that changed. “When I started in 2005, they had services every Shabbat, but as the original tenants died off, fewer of the newer tenants were Jews,” she said.

Ms. Kohn has lived in Teaneck since 1982 and was a member of both Congregation Beth Sholom and Temple Emeth, deciding ultimately that the latter was “where I belonged.” While she had grown up as a Conservative Jew, she found herself gravitating to Reform Judaism. (Beth Sholom is Conservative and Emeth is Reform.) She also realized that “so many people at Emeth had come from Conservative synagogues.”

She and her husband, Barry Obut, have two daughters, Rachel, 37, and Michelle, 35. Rachel, who attended a farm camp in the Poconos as a child, “fell in love with farming.” Although she later earned a degree in neurobiology, she never wavered in her agrarian dreams and now she is a farmer in Napa County, California. Michelle, who teaches in a Montessori school, lives in Ithaca, NY.

Ms. Kohn grew up in Washington Heights, “with German refugee parents,” Fred and Ilse. “I figured out later that there were Jews who were born in this country. Everyone I knew were the children of refugees.”

Her father came to the United States during World War II and joined the American army. Her mother, sent with her brother on a Kindertransport to England in 1939, came here in 1947. “The rest of the family is gone,” Ms. Kohn said.

From Washington Heights, Ms. Kohn went first to Stony Brook University, “working while I was at school and every summer” to pay for it. “I needed to be away.”

Then, “I lived all over Manhattan,” she said, listing the many different neighborhoods she’d called home. She graduated from college with a degree in education in 1972, “when New York was laying off teachers. People were getting jobs in dangerous areas like the South Bronx or going to upstate New York. I wasn’t interested in that.

“My first real job was working for Social Security, a position she held for 7 years,” she said. “I didn’t like it. My husband was a computer programmer so I tried that, studying at NYU part-time. I didn’t like that either. There was so much attention to detail. After having my first daughter, I went back to work part-time. After my second, I became a stay at home mom.”

When she was able to go back to work, the computer field had changed so much, “I couldn’t go back. I had a variety of teaching jobs,” teaching preschool as well as computer programming for kids. She also was a Hebrew school teacher, a substitute teacher, and did home instruction.

In 2004, it occurred to her that she might like working with seniors. “I found Federation Apartments and I knew I would be happy there,” she said, noting that it combined her professional interests and her knowledge of things Jewish. In fact, she said, the residents were very kind and affectionate, with some inviting her into their apartments after work hours, telling her stories about their own lives.

Not all of the activities she planned were Jewish-themed. For example, she said, “We went shopping, and we went to see the cherry blossoms in Branch Brook Park and the falls in Paterson. At one point I thought I would write a book about the residents. They had such interesting lives. One man fled Spain during the Franco regime and had stories similar to Holocaust ones. African Americans from the South spoke about institutionalized forms of racism.”

Ms. Kohn worked as a volunteer for several years with Teaneck Hadassah, “doing their newsletter and programming.” The chapter no longer exists. “People stopped coming,” she said, even pre-covid. Shortly after her retirement from the Federation Apartments, she was introduced to the National Council of Jewish Women and began to work at its thrift shop in Bergenfield. “A bunch of ladies would come in to see me on Mondays,” she said. “I sold my book to some of them.”

Back to why it took so long to write the book.

“I wasn’t the kind who could be an English major,” she said. “I needed a practical job. I’m not one who can just sit there for a year writing a book.” She also knew she couldn’t write it while she was working.

Given her own choice of reading matter, “I knew my book would be a murder mystery.” But what to write? “There were a few people in my yoga class who had written books,” she said, so she sought their advice. She also knew that one should write what they know.

“I know yoga” — she has been doing it for 18 years — “and I had read an article about two yoga teachers, both married, who had an affair and then married each other.” Her ideas began to take shape, and she envisioned a mystery involving an affair between a yoga teacher and a student.

“I realized that it was now or never. I got a few books, one on how to write a murder mystery, as well as Writing for Dummies, and Stephen King on writing.” There followed four years of writing and rewriting, “slashing, rearranging, and searching for the perfect word.” One friend advised her that using a thesaurus “wasn’t cheating.”

Attending a Zoom reunion for high school alumni, “I spoke to someone who was a writer, asking if I could call her. I called and we spoke for two hours. It was very inspirational.” When the local swim club reopened, “I realized I could write all morning and then go to the swim club.” She followed that routine and soon had friends offering to edit, all having “a different slant.” Her younger daughter advised her on the proper words to use when spoken by people her age.

Ms. Kohn also attended two writers groups, summoning up the strength to reject certain suggestions. “I started realizing that you can’t listen to everything they say. You have to listen to yourself.” For example, while key characters in her book are twins, one writer told her, “you can’t have twins” unless there’s a good reason. She kept the twins.

While she’s still in a writers group, she hasn’t brought in any recent writings. She spends much of her time “being my own publicist, blasting Instagram, Facebook, visiting yoga teachers and giving them copies of the book.”

Some of the book’s characters are Jewish. “I wanted the characters to reflect the ethnic diversity of Teaneck,” she said, “so I picked some white people, some Black people, and some Jewish people.” She also includes Hispanic twins and an Italian American.

“Death by Yoga” is available on Amazon and as a Kindle download.