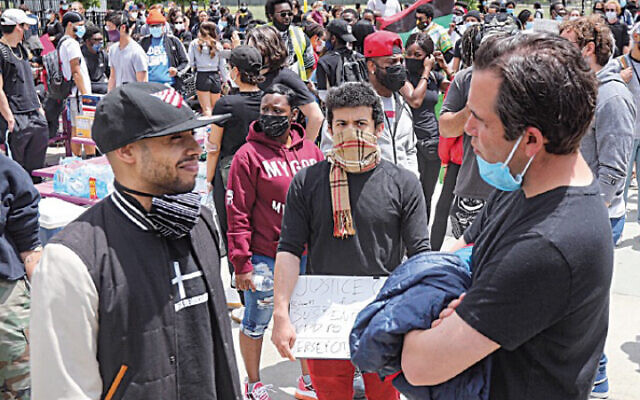 As cities in the metropolitan area and New Jersey’s capital in the state’s south are battered by protestors enraged by the agonizing, nearly 9-minute-long videotaped death of George Floyd, punctuated by his pleas for air and his mother, somehow, at least so far, Jersey City has managed to escape the fury.

So has Newark, the state’s biggest city and the one that suffered horrifically and notoriously in 1967, when 26 people died, many more were injured, businesses were demolished and set afire, and everyone who could — mostly white people, including most of the Jewish community — fled.

Jersey City, the state’s second-largest city (it is smaller than one of its neighbors, Newark, and thoroughly dwarfed by another one, New York City) had suffered through a riot earlier, in 1964; it was in response to the way police officers treated African-Americans. It was much smaller scale than the riots in Newark three years later, and no one died.

Now, after a great deal of time and energy and money and thought has gone into defusing the tinderboxes that Jersey City and Newark had been, there was far less damage in either of those cities than in many other places across the country.

Steve Fulop, who is Jersey City’s second-term mayor (and also the grandson of Holocaust survivors and the son of Romanian-born parents who lived for a time in Israel, where his father served in the IDF’s Golani Brigade), is grateful that his city has remained generally unharmed by the rage and is pulling out of the damage caused by covid-19.

It’s not accidental, he said.

“We’ve had protests scheduled for virtually every day this week, and we are working with the organizations that create them,” Mr. Fulop said. On Monday, he went to a demonstration. That’s not just a gesture, he said. “I think that the causes of racial justice and calling out racial inequality, and highlighting them, are important and just. The organizations have demonstrated over time that when they organize protest rallies they do it carefully.

Jersey City is a remarkably diverse place — most years Wallet Hub, which compiles these lists, ranks it as the most diverse city in the country, although some years it drops to second place. “Over the years, we have gotten a lot of diversity in our police department,” Mr. Fulop said. “It used to be majority white, and now it’s majority minority. It’s 70 percent minority. You want the police department to resemble the community that it serves.

“We do a lot of bias training and sensitivity training around different cultures. I feel that we have done a lot as a city, but we are not perfect. We are going to look to do better. We are listening to the community, we understand their anger, and we want to be part of the solution.” So far, at any rate, the protestors seem to accept and believe that, and the protests have remained peaceful, he said.

It’s been a process; good will has to be earned, and the path toward that goal isn’t always straight. “Over the last three years, we have had a couple of instances of the use of force when the police interacted with the public,” Mr. Fulop said. “The community wanted us to look into it further, and we did. In some cases we sided with the police department, and in other cases we terminated the police officers.

“There was a street fight that escalated only about two weeks ago, and the videos were turned over to a prosecutor in the state attorney general’s office. We are waiting on that.

“We have had our fair shares of incidents,” he said. “We are listening, and where we can do better we will do better.”

An oddity of New Jersey state law gets in the way of oversight, he added. “New Jersey does not allow a police civilian complaint board.” Newark tried to institute one four years ago; the police union objected, and the whole nasty mess “is working its way through the court,” Mr. Fulop said. “Once it is clear, we will implement a board if it is allowed. If it is not, we will work with state legislators to change the rule, but we cannot just implement it now.”

Mr. Fulop turned to the coronavirus and covid-19, the first in the recent set of plagues he’s been fighting. “We’ve been very proactive,” he said. “We were the first in the state on shutting down, and now we’re thinking about reopening. We are doing our best to get businesses up and running.” Much of the plans for reopening involve supporting restaurants as they develop outdoor seating this summer; the city plans to provide the street space as it works up safety plans.

In April, Jersey City started its covid-19 community relief fund, a public/private fund for victims of the virus. “About a third of it goes to the most vulnerable, to the most low-income and immigrant communities. Another third is forgivable loans to small business. We are doing it in a way where we hope we will be able to forgive all the money that we give out, but we want some accountability.” That means that most of the loans will be forgiven — turned into grants — in a year, but in order to have that happen, the business will have to exist. If the business owner takes the money and runs away from the business, he or she will be on the hook for it. “That’s why we don’t want to just write a check,” Mr. Fulop said.

The last third, give or take, “will support the arts community, and a portion of that will be direct grants to artists working with the arts council, and another portion will go to nonprofits, with a priority to nonprofit youth activities in the arts world.

“That’s because there is no summer camp, no summer programs, a lack of recreation scheduled for Jersey City this summer. So we are trying to find partners in the nonprofit world” as he and his staff look for things that young people, untethered from even virtual school over the summer, can do.

He’s also focusing on the arts, Mr. Fulop said, because “we are trying to prioritize things that make a city special. You need economic diversity to make sure that your most vulnerable communities have the opportunity to stay here. And your businesses and your restaurants are so vital to a place like Jersey City. People chose it because of the accessibility of corner stores and restaurants.” It’s the diversity of the people and the languages you hear on the street and the smells that come from the restaurants and the colors people chose to wear that drew people to Jersey City before the pandemic, the crash, and all the associated horrors, and it will be those things that will continue to draw people once this time is over, Mr. Fulop said.

“We are doing better as a city than most because we were early; early in closing down, early in raising money, early in trying to set up to reopen. We are in a situation now where every day has a massive impact on what the city will look like in six months from now.

“We are trying our best to be proactive.”