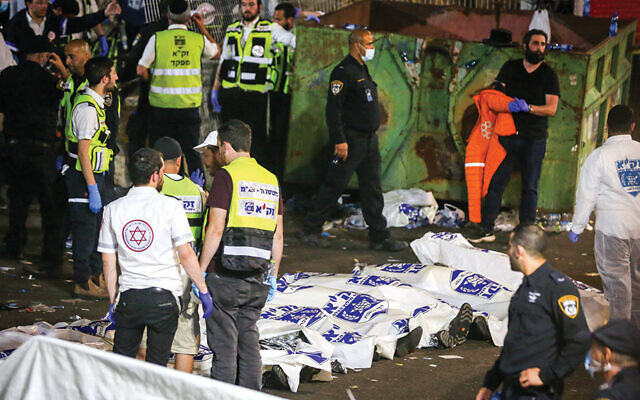 Israeli rescue forces and police at the scene after the deadly events during the celebration of Lag b’Omer on Mount Meron, in northern Israel, on April 30, 2021. (David Cohen/Flash90)

Nachman Doniel “Donny” Morris’s smile was broad in the selfie he snapped at the Lag b’Omer celebrations in Meron, in northern Israel, last Thursday night. The 19-year-old Bergenfield native was in Israel for a post-high school year of yeshiva study.

That broad smile was recalled again and again at his funeral. He was one of 45 people killed in a stampede at the pilgrimage site, which had attracted more than 100,000 people.

Also among the dead were Elazar Yitzchak Koltai, 13, who had lived in Passaic before moving to Jerusalem with his family, and Yosef Amram Tauber, 19, of Monsey, a student at the Brisk yeshiva.

For Israel, which has a painful expertise in dealing with death from war and terror, the stampede earned a dark distinction: the deadliest civil disaster in the country’s history. Mount Meron is worse even than the Carmel Forest fire of 2010, which also killed more than 40 people while burning a large swath of a natural treasure.

Paramedics “were exposed to very, very difficult sights, sights that we haven’t seen here in Israel since the worst days of terrorist waves back in the beginning of the 2000s,” said Dov Maisel, the director of operations for United Hatzalah, an EMT service, in a video from the scene. “I have no words. I honestly have no words.”

Rabbi Yaakov Neuberger of Congregation Beth Abraham in Bergenfield eulogized Mr. Morris as “mature beyond his years.” The funeral was streamed on YouTube to tens of thousands of viewers. It took place at Yeshivat Sha’alvim in central Israel, where Mr. Morris studied, with Rabbi Neuberger and others streaming in on video from Beth Abraham. 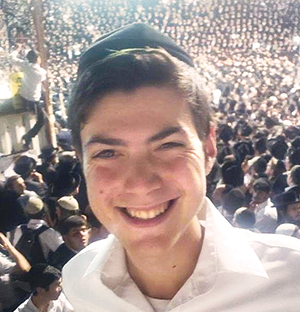 Rabbi Neuberger said that even before he reached the age of bar mitzvah, Donny wanted to lead prayer services in the synagogue — and he did.

“He wanted to be in Meron because he knew there would be some inspiration he would have there,” Rabbi Neuberger said. “The last picture we have of Donny is him being surrounded by Jews, wanting to be inspired.”

“You were an amazing, son, grandson, nephew, cousin, student, friend, and sibling to your sister and brother,” she said. “We all always knew how wonderful you were. But over the last 72 hours, the countless stories I have heard about you from people I know and even those I don’t shows how you touched so many lives with your kindness and huge heart.

“While this pain is more than a mother can bear, I’m really not alone,” she said, noting how so many members of the community, family, and students have joined in her grief. “There was no one who didn’t love you and didn’t want to be close to you.”

Both of his grandfathers are rabbis; one, Rabbi Ira Kronenberg, lives in Passaic and was the longtime director of religious services at the Daughters of Miriam Center/The Gallen Institute in Clifton. 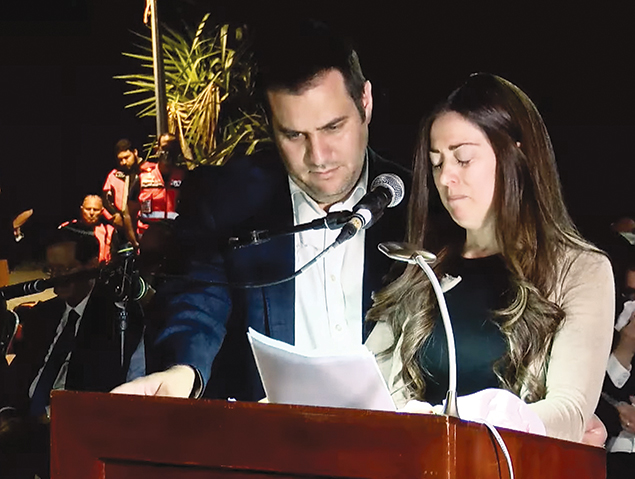 Rabbi Tanchum Cohen, assistant rabbi at Beth Abraham and Donny’s 12th grade rebbe at Yeshiva University’s High School for Boys, talked about Donny’s “trademark” smile. “It was deep, it was genuine,” Rabbi Cohen said. “He made you happy to be around him.”

“Everyone around Donny felt that he was their best friend,” said Rabbi Ari Waxman, principal of the Sha’alvim yeshiva. “He had a smile that lit up the entire room when he walked in.”

Mr. Morris was buried in the Mount of Olives cemetery in Jerusalem on Sunday night.

On Monday, Israel’s state comptroller, Matanyahu Englman, launched an inquiry into the stampede, citing earlier warnings from his office, over the course of many years, that the site was unsafe for mass use.

“We must now examine and see how this incident should have been prevented,” Haaretz quoted Mr. Englman as saying; he also said that he would explore assigning personal liability for the tragedy.

He noted that reports by one of his predecessors in 2008 and 2011 found that structural changes to the site in northern Israel were made without oversight. Tens of thousands of Jews, most of them charedi Orthodox, gather at the site each year to commemorate the death of second-century Rabbi Shimon Bar Yochai, whose tomb is believed to be there. 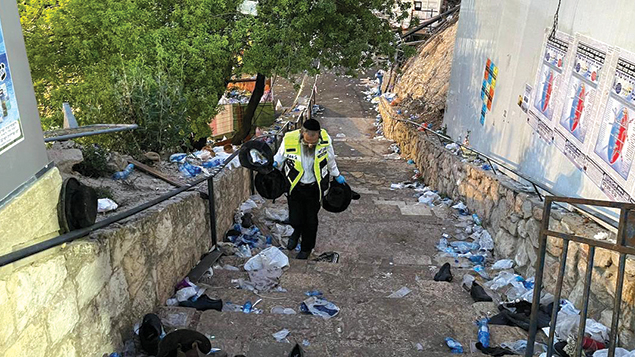 A volunteer with Zaka, the Israeli emergency response team, walks through the debris left after the stampede in Meron. (ZAKA/Aharon Baruch Leibowitz)

The comptroller’s office does not have enforcement powers. A number of Israelis, including Knesset members, are calling for a commission of inquiry that could recommend criminal indictments.

Accusations so far have been aimed mostly at Prime Minister Benjamin Netanyahu and two Cabinet members close to him, Interior Minister Aryeh Deri and Public Security Minister Amir Ohana. The trio reportedly removed restrictions for access to the site as Netanyahu cultivates charedi parties in a bid to form a government following the March elections.

On Thursday, hours before the disaster, Interior Minister Aryeh Deri bragged to the charedi radio station Kol Chai that he had successfully prevented Health Ministry officials from limiting the number of attendees over coronavirus fears. Rabbi Deri lamented that the professional echelon at the ministry did not grasp that attendees would be protected by the spiritual influence of Rabbi Shimon Bar Yochai.

“The government clerks don’t understand,” he said. “This is a holy day, and the largest gathering of Jews [each year].” Bad things don’t happen to Jews on religious pilgrimage, he suggested, saying “One should trust in Rabbi Shimon in times of distress.”

Benny Gantz, the Blue and White party leader who is justice minister, said that he has asked the attorney general for a legal opinion about establishing a commission of inquiry. Mr. Gantz is among those seeking to keep Mr. Netanyahu from emerging as prime minister in the negotiations.

Mr. Netanyahu has said he will set up a commission following shloshim, the 30-day period of mourning.