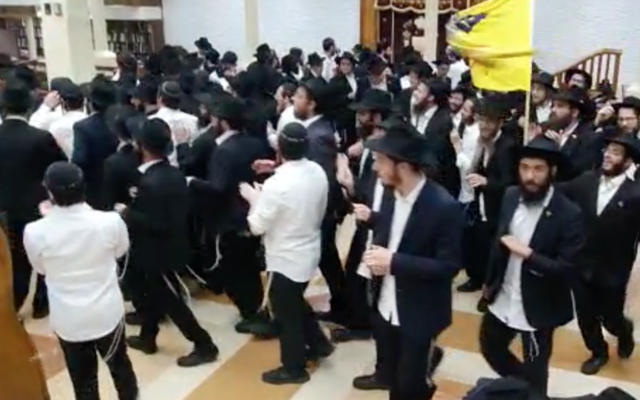 The synagogue at 770 Eastern Parkway reopened to a large service Monday. The synagogue had reopened last month for a service of 10 men. (Screenshot from video)

The main Chabad synagogue at 770 Eastern Parkway in Brooklyn reopened to a large crowd Monday, more than three months after it shut down amid mounting restrictions meant to stop the spread of the coronavirus.

The raucous service was documented in a video posted to Instagram by COLlive, a local Orthodox news site in Crown Heights. No one in the video, which shows dozens of men singing and dancing, appeared to be wearing a mask and most did not appear to maintain social distancing.

The reopening is the latest evidence that some parts of New York City’s Orthodox community have largely returned to normalcy after three months of lockdown, despite the fact that the city only began its second phase of reopening Monday and social distancing and mask wearing are still recommended.

The synagogue, located in a complex that includes the former office of the late leader of the Chabad movement, Rabbi Menachem Mendel Schneerson, waited until much of the city had shut down before closing its doors, for the first time ever, late on March 17. The synagogue is located within the same building complex as the Chabad movement headquarters but is controlled by independent synagogue leaders, called gabbaim, who coordinate services.

The decision to close the synagogue, which is known for hosting dozens of services and hundreds of visitors each day, came days after many synagogues in New York City canceled their Shabbat services. After rabbis in the community ordered the building and other synagogues closed, men stayed at the synagogue at 770 Eastern Parkway and danced late into the night.

In keeping with New York’s rules for houses of worship, the building reopened last month to a service of 10 men, the number needed to form a prayer quorum called a minyan needed to recite certain prayers.

Monday’s service was the first at the building to make possible some of the activities that typically characterize prayer at the synagogue. Under the newly widened restrictions, houses of worship may now admit up to a quarter of the people they are designed to hold — 250 for the synagogue at 770 Eastern Parkway, according to COLlive. (Gov. Andrew Cuomo accelerated the pace by which houses of worship could open amid pressure from religious New Yorkers, including Orthodox Jews, and left it up to each one to create its own mask and distancing rules.)

New York City’s new rules coincided with Rosh Chodesh, the beginning of a new month on the Jewish calendar, a day that is marked with  special prayers and, in some synagogues, dancing.