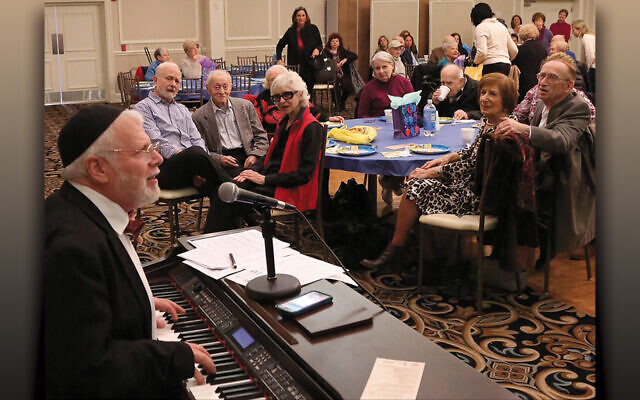 A Café Europa gathering, in the before times.

Every month for the past decade, a couple of dozen Holocaust survivors gathered for food and fellowship at Café Europa, which met at the Rockland Jewish Community Center. This international social program, created by the Claims Conference, is supported locally by Rockland Jewish Family Service and the Holocaust Museum & Center for Tolerance and Education.

Now, with everyone homebound because of covid-19, these survivors are missing the bagels, lox, and cream cheese — and even more, the camaraderie — that Café Europa provided. In response, the Rockland Community College-based Holocaust Museum & Center for Tolerance and Education launched “Café Europa On the Go,” its executive director, Andrea Winograd, said.

“When the covid pandemic started, we were very concerned about the socialization aspect of survivors — the loneliness, the feeling that they are isolated and in hiding — so we decided to take it on the go,” she explained. “Georgia Kass, our Café Europa coordinator, was worried about our participants getting proper nutrition, so we figured we’d deliver fresh meals. We asked the community for donations for this program, and overnight we got $5,000.”

Once a week, the museum arranges delivery of hot meals from the kosher Aldila Bistro in Monsey. And in addition to fresh dishes such as poached salmon and eggplant parmesan accompanied by a salad, the packages contain “love letters” from the Café Europa team and community members.

“We’ve even gotten the fourth generation involved,” Ms. Winograd said. Five-year-old Nora, whose great-grandma is a local survivor, wrote notes to tuck into the food packages along with bottles of moisturizer and hand sanitizer.

The deliveries cannot take the place of the real Café Europa experience, but it assures some form of personal contact, albeit socially distanced.

“We can at least deliver the food and wave hello and let them know that even though we can’t be together, we care,” Ms. Winograd said. “We’ll continue as long as necessary, because we don’t know when we’ll be able to get together in person again.”

Seeing a friendly face delivering food from his favorite local restaurant gives a lift to Café Europa regular Sam Bradin of Suffern. “I appreciate it. It’s very helpful,” Mr. Bradin said. “My children don’t want me to go out because of the virus.”

Originally from Poland, Mr. Bradin survived more than two years in Auschwitz and was the only member of his immediate family left alive at the end of World War II. Eventually he made his way to New York, got married, and had three children, three grandsons, and two great-grandchildren. On April 20, tragedy struck again as covid-19 claimed Mr. Bradin’s 36-year-old grandson, Yoni.

During this difficult time, Mr. Bradin said gratefully, “the Holocaust Museum calls me to check on me and supplies me at least once a week with food.”

Another 50 local Holocaust survivors receive weekly food deliveries and other services through the Rockland JFS. “We were eager early in the pandemic to reduce risk to survivors,” Doris Zuckerberg, the agency’s director of older adult services, said. “Many of them have been hesitant to have aides come to their house to prepare food for them at this time. The idea of having prepared foods is very welcome.”

In addition to recruiting volunteer grocery shoppers, the Rockland JFS has funding from the Claims Conference, the Rockland Jewish Federation, and local donors to prepare food for survivors in the kosher dairy café of the Rockland JCC, the building in which the agency is headquartered. “The café serves as a vocational training site for people on the autism spectrum. When it closed to the public because of covid, we opened the kitchen for our chefs to make food for volunteers to pick up and deliver to survivors every week,” Ms. Zuckerberg said.

The JFS deliveries contain soup, salad, and fresh produce, as well as challah donated by the Challah Fairy in New City. “We were able to deliver Shabbos dinners one week from another source, and we anticipate doing it again,” Ms. Zuckerberg added. “We’re very mission-driven with survivors. We feel humbled to be able to work with this population during this very difficult time.”

JFS case managers have been reaching out frequently to survivors and to the home-care agencies that serve them, to identify and fill needs such as supplying personal protective equipment.

Charles Srebnik, a survivor living in New City, says he and his wife enjoy the “wonderful soup, salads, and challah,” and above all the phone calls from Ms. Zuckerberg and senior social worker Susan Conry. “The people helping us are so terrific,” he said. “I couldn’t hope for better people. If we need anything, we call, and they immediately help us out. Psychologically, it’s number one.”

Mr. Srebnik also is one of eight Rockland County survivors participating in an art, music, and holistic wellness program funded by a grant from the Jewish Federations of North America’s Center for Advancing Holocaust Survivor Care.

Through this program’s partnership with the SageArts nonprofit organization, which pairs writers, singer/songwriters, and filmmakers with elders to create inspired works of performed art, songwriter Michael Veitch has been working with Mr. Srebnik to compose a musical about the Belgian Holocaust survivor’s life. “Before the pandemic he would come to my house to talk about my music and art interests,” Mr. Srebnik said. “Now we stay in touch by phone and email.”.

“We’d been doing this for two years already in Dutchess, Orange, and Ulster counties, and we started in Rockland last year,” Paula E. Blumenau said. She directs Holocaust survivor support at Jewish Family Service of Orange County, the agency that received the grant.

“In total, we are currently working with close to 40 survivors throughout the area. Overall, this program is about supporting survivors with socialization and interaction. In Rockland, they’re creating books, songs, and poetry with SageArts to celebrate their life, their resilience and strength. It’s a cathartic experience for many.”

Unfortunately, personal meetings with survivors had to stop during the pandemic. Those who have digital technology, including Mr. Srebnik, have been able to continue remotely. Through Consumer Cellular, the Orange JFS is procuring GrandPads — a simple tablet computer intended for seniors — for program participants who do not have technology but are interested in maintaining their connections and willing to learn to use it.

“I think soon we’ll be able to go back to one-on-one meetings between survivors and providers in a socially distant way in their own homes,” Ms. Blumenau said.