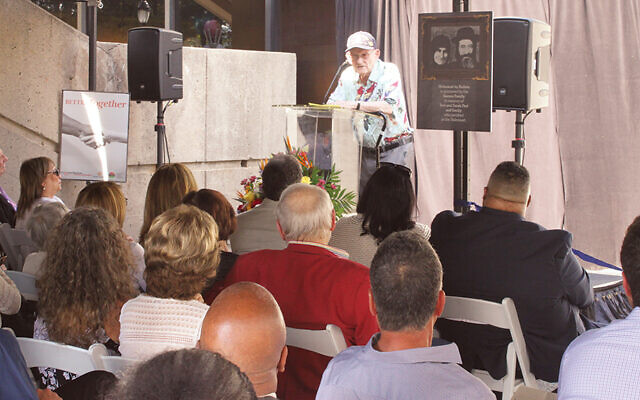 Alan Moskin, a camp liberator, speaks at the opening.

Since 2015, those doors have been on the campus of Rockland Community College in Suffern. “Museum stakeholders identified an increasing need for Holocaust, genocide, and human rights education” on the RCC campus, according to the museum’s website. Clearly, the idea was well received.

The Rockland museum is considered an important regional cultural and educational center, and New York State’s department of education recently recognized that status by upgrading its charter. “We started out with a provisional charter and then just this year were awarded an absolute charter,” the museum’s executive director, Andrea Winograd, said. “That’s big in the museum field.”

Changing the museum’s name was not an arbitrary decision. Its mission — “to educate, through the lens of the Holocaust, about the dangers of intolerance, to invoke critical thinking, and to inspire moral courage in the face of injustice” — is too large to fit under its original name. With hatred increasingly rampant in the wider community, the museum is working “to facilitate an understanding of the universal nature of human dignity and of the critical importance to respect and defend it,” according to its vision statement.

Ms. Winograd called the museum’s location on RCC’s campus “a gift. It’s a beautifully diverse campus, and 250,000 people come through it each year.” Even without those visitors, the school itself has some 7,000 students, she said. The institution is used in conjunction with college courses, “woven into the fabric of the campus through classes, multicultural studies, history, and Holocaust classes. We see nursing students, art students,” and so on, she said.

Like virtually every other museum in the country, the Suffern facility has been closed for a year. But things are slowly returning to normal, and the college is eager for the museum to reopen. On Sunday, the center held a ribbon-cutting ceremony to announce its soft opening — it will not yet be fully accessible to the public, but small groups will be able to book tours. There were 50 people physically present for the opening; other supporters joined online. The museum will open officially in October.

The reopening also launched the museum’s new permanent exhibit about the Holocaust. It’s designed by the Layman Design Team, the same group that designed the core exhibit at the National September 11 Memorial and Museum in lower Manhattan. The text for that new permanent exhibit is by noted Holocaust scholar Michael Berenbaum. The collection includes “treasured artifacts contributed by survivors in Rockland,” Ms. Winograd said. “People would come and drop off Nazi memorabilia and pictures they didn’t want in their house.” The museum still is busy acquiring items, she added.

Before the pandemic, the museum — which is 90 percent funded by private donations, and 10 percent by grants — reached about 20,000 students a year, Ms. WInograd noted; to her knowledge, there are no other Holocaust museums north of this one “until you reach Canada. The museum was built not just for Rockland County but for the whole region. There are education centers on some campuses, but no other museums.” 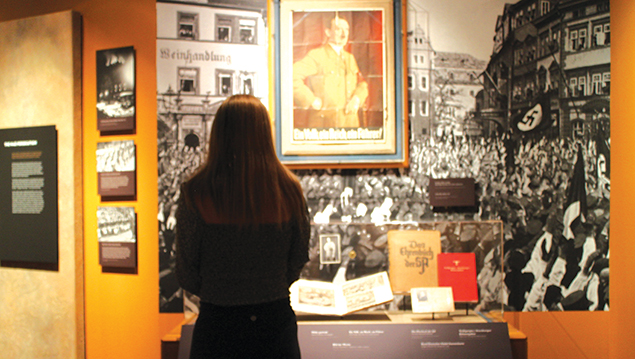 A visitor studies an exhibit at the Rockland Holocaust Museum & Study Center in Suffern.

Students served by the museum have come from public schools, yeshivas, and Catholic schools, she said, noting that educational programs are tailored to different age groups. For example, the younger children, in kindergarten through fifth grade, have classes on kindness. “We teach them that kindness is contagious, and we introduce heroes of the Holocaust,” Ms. Winograd said. “We don’t want to traumatize them.” By sixth grade, the children read about Anne Frank. Workshops for the older grades include such topics as moral courage, resilience, and combatting anti-Semitism.

A key part of the program is the Survivors’ Project, video testimony of survivors who are local to the Lower Hudson Valley Region, many of whom were instrumental in founding the museum, according to its website. Ms. Winograd said that each of the 18 survivors featured in the program addresses a different crime, whether hunger, torture, or tattoos. “One of our most precious programs is our speakers’ bureau, where young and old alike interact with survivors, liberators, and hidden children,” she said.

Sharon Sasson of New City is the daughter of survivors and a member of the museum’s honorary board; she and her husband, Uri, have done much to support the institution. Before there was a physical museum, educators brought their programs to the various schools, she said. “We were a traveling museum for many years.” Nor did the museum’s education program cease during covid. Its programs continued virtually, and students could continue to Zoom with liberators and survivors.

The Sassons sponsored the museum’s earlier exhibit, “Holocaust by Bullets,” in memory of Sharon Sasson’s family, the Perls, who were murdered in the Holocaust. The exhibit documented mass Jewish killing sites in Eastern Europe.

Holocaust education is vitally important, Ms. Sasson said. “Only 70 years out, people are already denying that it happened, and hatred and anti-Semitism is showing its face with a vengeance.” She said that we must keep Israel strong to prevent a Holocaust from happening again. And racism “is not just about Jews — that’s what we teach here. It’s about learning to be kind. People don’t want to keep hearing only about the Holocaust. They ask, ‘What else are you doing?’ We must stand up against hatred and racism anywhere in the world. We know what it feels like. We must be the voice of the people who don’t know.

“We’re not a teaching machine,” Ms. Sasson continued. “People come to our classrooms and do workshops on moral courage and kindness.” She said that schools love the program on “paying it forward — and it needs to be repeated and repeated.”

From the time she was young, she was taught about the Holocaust, Ms. Sasson said; but her husband’s family came from Baghdad, and they knew little about it. Uri Sasson “probably is the only Sephardic Jew whose been to every Holocaust museum and concentration camp,” she said. “It’s his most personal mission.” While he has built synagogues, day schools, and mikvahs, “this museum is his pride and joy.”

Small groups seeking to arrange a museum tour should call (845) 574-4099 or email holocaustrcc@gmail.com.