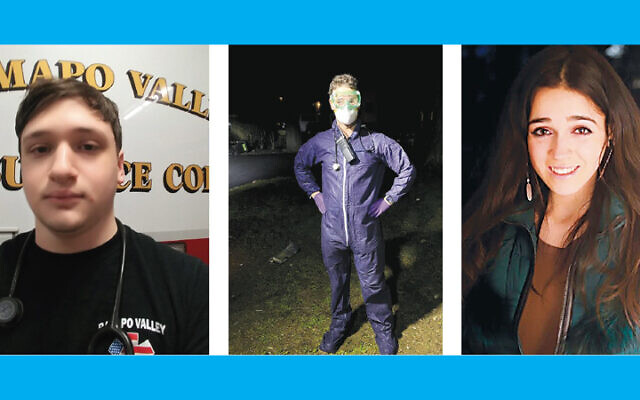 You might say that Jordan Katz was born to be a Hillel Hero.

Mr. Katz, 19, was one of three students at the Rockland Hillel to earn $100 for an essay describing their service during the covid crisis.

A native of Monsey who studies nursing at Rockland Community College, Mr. Katz is an emergency medical technician with Ramapo Valley Ambulance Corps in Suffern.

“I grew up hanging around the ambulances,” he said. “It was always in my blood. My parents actually met each other working as EMTs in the ambulance. They joke that as a 4-year-old I knew the ambulance better than some of the EMTs. I always felt at home there.”

Three years ago, he joined an ambulance youth corps “where teenagers who wanted to get involved could start riding on the ambulance as trainees and get hands-on experience,” he said. “I’ve been doing it ever since.”

Really, no surprise there.

But his deep involvement in Hillel — he is a vice president — came as a surprise to him.

“I thought I would just go to RCC and get my classes done and leave,” he said. “I wasn’t originally going to be involved with Hillel. In elementary school and high school, I was kind of always the loner guy in the back of the classroom on his phone.”

Then he met the Chabad couple who run Rockland’s Hillel: Rabbi Dov Oliver and his wife, Shevy; he also met some of the students who hang out at Hillel.

“I realized I was missing out,” he said. “I got a group of friends who embrace me for who I am. I really found my second family there.”

So in the spring semester, his second at RCC, he was elected a vice president of Hillel.

Then came covid-19. Suddenly, hanging around at Hillel wasn’t an option.

Mr. Katz doubled his EMT shifts and started putting in more more than 40 hours a week in the ambulance, while continuing his school work remotely. In one month, he responded to 100 calls.

He also spent two weeks working at a hotel in New York City that was housing people who couldn’t self-isolate. This included doctors and other medical professionals who didn’t want to risk infecting family members as well as homeless people.

He worked 12-hour shifts, standing ready to provide medical care in case anybody needed medical intervention. “Truth be told, it was slow,” he said. “We saw three people a night.”

Now, “I’m back home, riding whenever I can, seven or eight shifts scheduled a week.”

He’s also working as a volunteer EMT instructor for the Rockland County Fire Training Center. “We have a head teacher teaching the important things — the medicine you’re allowed to give and how you transmit over the radio and how you do an assessment — but there’s me and a dozen other people doing the hands-on things like how to do a splint or even how to deliver a baby,” he said.

Rafi Cohen, 23, also of Monsey, is another of the Hillel heroes. He’s been friends with Mr. Katz for a few years. He too is an RCC nursing student — now finishing his second year — and an EMT. The two met at the Spring Hill Community Volunteer Ambulance Corps, where Mr. Cohen still works. It was Mr. Cohen who brought Mr. Katz into Hillel.

Mr. Cohen’s essay described his work as an EMT this spring.

“Carrying the two hundred and fifty-pound patient who is having difficulty breathing down three flights of stairs to get him to the ambulance is no easy feat,” he wrote. “Now picture doing that during the covid-19 outbreak. It wasn’t easy putting on that gown, those gloves, a mask, goggles, and a face shield. Your goggles start fogging up, you can feel the sweat start trickling down your back, and the perspiration build-up under your gloves.”

“It was a privilege to be there and involved and be there in the frontline doing something during this pandemic,” he said. This summer he’s working in a pediatrician’s office, “taking vitals and doing blood work,” he added.

Elisheva Aaron was the third winner of the contest, which was sponsored by members of the adult board that supervises the Rockland Hillel. In her essay, Ms. Aaron described her relationship with a neighboring 7-year-old in the care of his widowed aunt. She visits daily “to put a smile on his face,” as she wrote.

“I hope to continue being a constant presence in this boy’s life during the Pandemic,” she continued in her contest entry. “I cannot save the planet, but I know each child is a world of their own, so in my own small way, I have the honor of infusing light into a miniature world.”

“We had a debate,” he said. “The RCC debate team helped us run it. A lot of people came. There have been a number of different Torah classes. We had a talent night where different people did pandemic poetry and corona comedy. We had a TED talk night. Early on, when people were just stuck at home, we did a show-and-tell. People showed artwork they made or a pet that kept them company.

“It’s called social distancing, but in reality the socializing continued and needs to continue.”

The Olivers’ personal connections also continued. “There are students who are really going through hard times,” Rabbi Oliver said. “There’s been a big increase in mental health and emotional health challenges. A lot of the students have been struggling with that. It can be such a challenge when everyone is stuck at home. We’ve had parents reach out to us to help everyone to get along.”

Rabbi Oliver had covid-19 himself.

“I was out for about three weeks around Pesach time,” he said. “I had non-stop fever from coronavirus.”