A circuit diagram of the Clean Machine.

When life hands you pandemic, what do you do?

If you’re the annual Innovation Day, put on by the Center for Initiatives in Jewish Education, you innovate.

So instead of hundreds of day school students displaying their engineering projects in one place, this year the inventions were presented on the web and with video.

At the Frisch School in Paramus, Innovation Day has been an opportunity for the freshmen and sophomores in the high school’s engineering track to create a capstone, end-of-year project. This year, 52 teams from Frisch competed in the contest.

“We adapted,” Rifkie Silverman said. Ms. Silverman is Frisch’s director of engineering and computer science. “Our kids did great. They really salvaged what could have been a big disaster.”

The students had begun planning their projects and ordering parts before the school shifted to remote instruction in March.

“When the lockdown hit, we took a step back,” Ms. Silverman said. “CIJE said they were going ahead with Innovation Day with different criteria.” Finished inventions would count for less, as cardboard mockups cut and taped at home replaced 3-D printed components molded in the school’s engineering lab. Students were asked to develop web sites and videos promoting their inventions, a chance to develop skills they could do at home — slick presentations replacing the poster boards that went along with their machines in previous years.

“It really gave every student an opportunity to participate, whether or not they were ready to build things at home,” Ms. Silverman said.

The winner in the consumer products category was the Clean Machine, created by Frisch students Gabe Greenfield of Teaneck, Bayla Neugroschl of Teaneck, and Eytan Abramowitz of Bergenfield.

The Clean Machine is a soap dispenser with lights that flash for the 20 seconds recommended for handwashing in the covid age.

“The idea was to make it easier for kids to wash their hands effectively,” Eytan said. “We came up with the idea when we were still in school, just as it was starting to spread.”

Eytan and his teammates were sophomores. Because of the pandemic, teams couldn’t get together to work. They couldn’t build anything together. Eytan was in charge of the actual construction; his teammates made suggestions along the way.

The Clean Machine’s colored LEDs and soap pump are controlled by a hand-sized Arduino computer. The prototype’s cardboard case is less high tech. “It isn’t the best material for a bathroom,” Eytan said. The soap doesn’t actually touch the cardboard, which contains the microcontroller, which regulated both the colored lights that mark the time and the pump that dispenses the soap.

He tries to count to 20 when he washes his hands after coming from outside, “and it would definitely be easier with an actual device,” Eytan said. “There were a few times where I did try to use the Clean Machine, but I don’t want to ruin it.”

Gabe also sees the Clean Machine as inspirational for his own handwashing. “Ever since creating the project I’ve been putting more effort into washing my hands, but it’s not as easy as I’d like it to be since I don’t have the Clean Machine,” he said.

Gabe created the video that for the Clean Machine’s website. Bayla developed the marketing materials, which noted that “The global market for electronic soap dispensers was estimated to be 668.3 million USD in 2018.” 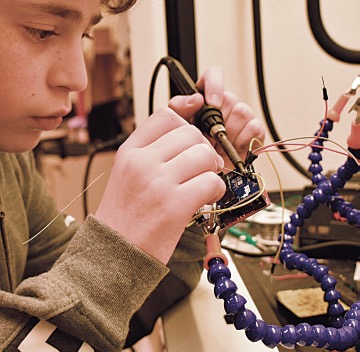 Eitan Weinberg solders a part for the Smart Locker.

The group of 10th graders of set out to solve a problem that probably has been plaguing high school students for as long as they’ve been storing their books in lockers.

“In Frisch no one locks their locker, because they’re hard to open,” Aaron said. “Once you get to your locker, you say what do I need for class, but when you get to class you realize you need five things you left in your locker.

“Our solution was two things. We put in a radio frequency lock that detects your student ID, and connected it to the internet so you can use an app on your phone to unlock it. And we put in a tiny screen to say what class you have.”

The team constructed a small wooden model with a screen and a lock. Aaron learned a new programming language — Python — to program the screen.

“Because of corona, I had so much free time to learn it,” he said. The downside of remote working was “it was harder to communicate and there’s not as much group energy when you’re not working on a project in person together.”

The inventors of EZ-fold, which earned second place in the Arduino Prototype Award, were ninth-graders Eliana Birman of Teaneck, Kayla Distenfeld of Teaneck, and Alex Massel of Manhattan. 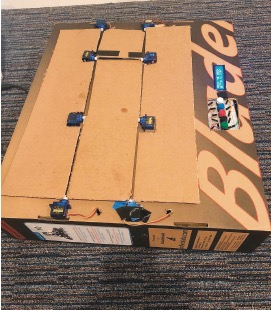 “It’s an automatic laundry folder for shirts and pants and hoodies,” Kayla said. “It’s designed to help people in big families who have a hard time folding laundry because they’re busy, and for people who have a hard time with the strength required to fold laundry. It can also be used for retail clothing stores.”

This machine also was a cardboard prototype. “It has flaps and servo motors,” Kayla explained.

In the project’s video, you can see the cardboard flaps fold up and down and left and right; their precise motions depending on what type of garment you’ve asked it to fold. Different colored buttons and a two-line LCD display are the user interface.

Because the motors that move the cardboard flaps are small, the prototype isn’t powerful enough to actually fold clothing. The team wants to continue developing the project “so that we can feel we finished it,” Alex said.