Police on Wednesday announced a curfew in Lod between 8 p.m. and 4 a.m. as forces amassed in the central city to prevent a third night of rioting and violence.

Despite the order, violent clashes were reported in the city on Wednesday night and a police car was set on fire, according to Hebrew media reports.

The curfew came hours after a state of emergency was declared in Lod, where intense Arab rioting late Tuesday saw three synagogues and numerous shops torched, along with dozens of cars.

A police statement said the curfew was ordered by Central District Commander Moshe Barkat after a “special” assessment led by Police Commissioner Kobi Shabtai, and that the move was aimed at “safeguarding the well-being, security and property of Lod residents.”

The only cause to leave one’s home during those hours will be to seek shelter from rockets fired by Palestinian terrorists in Gaza, for medical attention or due to other specifically authorized urgent needs — with police providing the following numbers to seek such approval: Hebrew: 08-9279201/08-9279217
Arabic: 08-9279123

Police warned that anyone violating the curfew could face up to three years in prison.

“The Israel Police asks the public to get prepared in the remaining hours before the restrictions begin and to listen to the instructions of police on the ground,” the statement said. “The police will continue to do everything to ensure the safety of the residents of Lod and the area.” 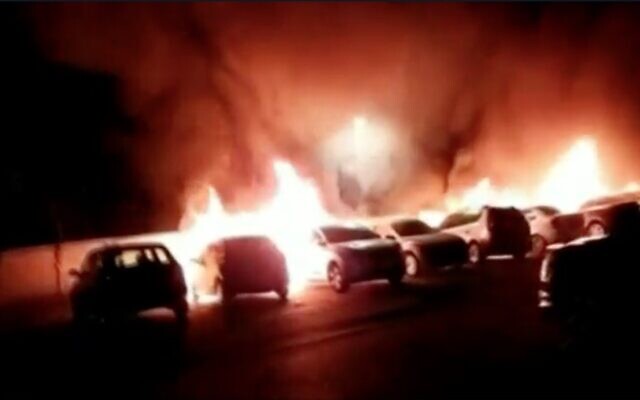 Cars on fire in Lod after being set alight by mobs of rioters, May 11, 2021 (video screenshot)

The clashes continued past the 8 p.m. deadline.

On Wednesday morning, Israel ordered a massive boost to police forces deployed in cities with Jewish and Arab populations, with several Border Police companies urgently dispatched to restore order in Lod after a rare state of emergency was declared.

A state of emergency gives police officers more authority and freedom to operate in the locality where it was declared. They can close off areas of the city, enter any place to carry out their duties and employ “reasonable force” to compel civilians to obey their orders.

On Tuesday, some Lod residents said power was cut in their homes and Molotov cocktails were thrown through their windows, and police acknowledged having to escort residents from a community center to their homes as Arab mobs marauded in the streets, according to Channel 12.

A local man, 56, was seriously hurt when a rock slab hit his car, and was hospitalized. Another local resident was also seriously hurt.

The mayor, Yair Revivo, said City Hall and a local museum were also attacked, and compared the situation to the Nazis’ 1938 Kristallnacht pogrom. “Civil war” was breaking out, he said, lamenting that decades of coexistence efforts had collapsed.

President Reuven Rivlin on Wednesday called the violence a “pogrom” carried out by “bloodthirsty” Arab rioters, while Prime Minister Benjamin Netanyahu said it was reminiscent of dark periods in Jewish history. Netanyahu visited the city during the night to oversee the efforts to impose order and end the riots.

Footage posted on social media showed a torched synagogue and two Torah scrolls being salvaged — unharmed — from its ruins. 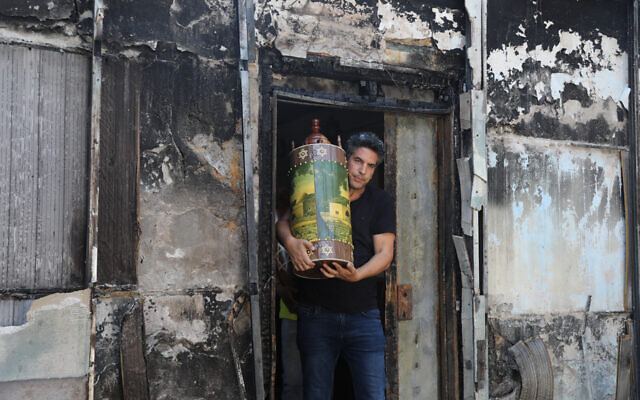 Israelis carry out Torah scrolls from a torched synagogue in the central Israeli city of Lod, following a night of heavy rioting by Arab residents in the city, on May 12, 2021 (Yonatan Sindel/Flash90)

The prime minister urged Lod residents to stay home and on Tuesday night said he would impose a curfew if needed. “We will restore law and order with an iron fist,” he said.

Three Jewish men were arrested Tuesday over the fatal shooting of an Arab man during clashes Monday night. They were being questioned on suspicion of murder, while maintaining that the shots were fired in self-defense.

But an initial investigation indicated that the shots were fired toward a man standing dozens of meters away, and a court on Wednesday extended their remand by three days, with Judge Tal Aner saying the self-defense claim “doesn’t match the objective findings.”

Israeli police during riots and clashes between Arab and Jewish residents, in the central Israeli town of Lod, on May 12, 2021 (Yossi Aloni/Flash90)

“We are seeing a situation in… [Jewish-Arab] cities that we have never seen before, including the incidents of October 2000,” the police commissioner said, referring to widespread rioting that broke out among Arab Israelis at the start of the Second Intifada.

Alongside the clashes in Lod, two residents were killed overnight in a direct rocket strike from Gaza on a vehicle in the city’s outskirts.

Khalil Awwad, 52, and his 16-year-old daughter Nadeen Awwad were killed, and his wife was seriously wounded, in Dahmash, an unrecognized Arab village just outside Lod with a population of 800.

The direct hit by terrorists in Gaza came as part of a major flare-up that has seen more than 1,000 rockets launched at Israeli civilians — including hundreds directed at Tel Aviv and other central Israel cities — in a day and a half of fighting. Four Israeli civilians, an Indian national, and an IDF soldier have been killed and dozens injured.