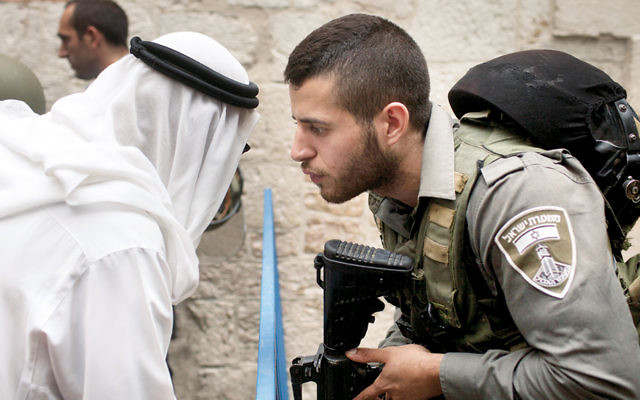 An Israeli border policeman talks to a Palestinian man near the scene of a stabbing attack in Jerusalem’s Old City last October. (Lior Mizrahi/Getty Images)

Democrats are more than four times as likely as Republicans to say they sympathize more with the Palestinians than with Israel, according to a survey published Thursday, and sympathy for the Palestinians among Americans overall is growing.

Sympathy for the Palestinians is up most sharply among the youngest American adults, growing threefold over the last decade, the new survey by the Pew Research Center shows. Some 27 percent of millennials say are more sympathetic to the Palestinians than Israel; in 2006 the figure was 9 percent. The share of those favoring Israel has held steady at about 43 percent.

On Israel, the survey also shows one of the widest-ever gaps between the two main political parties.

The new data is part of a telephone survey of more than 4,000 American adults between April 4 and 24 in which Pew surveyors asked respondents a range of questions about how they view the U.S. role in the world.

Among Americans overall, 54 percent say they sympathize more with Israel and 19 percent sympathize more with the Palestinians, with 13 percent saying with neither side and 3 percent with both. Compared to a similar survey conducted in July 2014, sympathy for Israel held steady while sympathy for the Palestinians jumped by one-third, to 19 percent today from 14 percent in the earlier survey.

Among liberal Democrats, the least pro-Israel grouping, more respondents say they are sympathetic toward the Palestinians than toward Israel: 40 percent vs. 33 percent. While the pro-Israel figure has held steady, the pro-Palestinian figure is the largest it has been in 15 years, suggesting that sympathy for the Palestinians is growing among these Americans who previously did not favor one side over the other.

On the Republican side, conservative Republicans favor Israel somewhat more than moderate and liberal Republicans do (79 percent vs. 65 percent).

The survey shows older Americans overwhelmingly favoring Israel over the Palestinians by a 4-to-1 margin, and Gen-Xers sympathizing with Israel more by roughly a 3-to-1 margin.

There is more optimism among Americans that a two-state solution can be achieved by the Israelis and Palestinians than skepticism that it cannot: 50 percent compared to 42 percent. On this, Americans younger than 30 are more optimistic (60 percent believe in the two-state solution) than Americans over 65 (49 percent say it’s impossible). About 61 percent of Democrats say they believe a Palestinian state can coexist peacefully beside Israel, compared to 38 percent of Republicans.

Overall, Americans are more convinced now than they were in August 2014, in the wake of the last Israel-Hamas war in Gaza, that a two-state solution is possible.

On other issues in the survey, 57 percent of respondents say they want America to deal with its own problems and let other countries sort out their problems on their own, while 37 percent say America should help other countries. Respondents identified ISIS as the top global threat facing America, followed by cyberattacks from other countries, the rapid spread of infectious diseases and refugees from the Middle East.

The largest partisan gap on the threat matrix was on the issue of climate change: 77 percent of Democrats identified it as a leading global threat compared to 26 percent of Republicans.

There is a sharp partisan divide on the question of how best to defeat global terrorism: 70 percent of Republicans say overwhelming military force is the best approach, while 65 percent of Democrats say that just creates more hatred and terrorism.