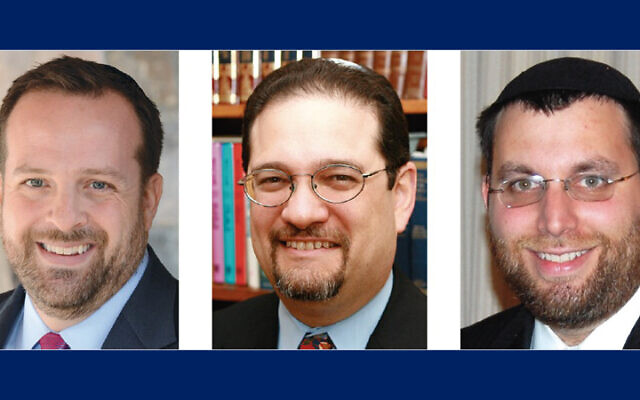 As we try to cope with our strange new reality, we need all the help we can get.

On June 10 (after this week’s Jewish Standard has gone to print, but before it arrives in mailboxes), David-Seth Kirshner, the senior rabbi at Temple Emanu-El in Closter, who is Conservative, will share his views on Judaism’s response in times of challenge and peril. In a presentation he’s calling “Light in the Darkness, a Jewish Perspective on Resilience,” Rabbi Kirshner said he hopes “to offer a sense of calm. To give a virtual hug.

“Right now, we’re seeing the conflation of a lot of events happening in our world,” he said, citing “a pandemic, which hasn’t happened in 100 years, an economy spiraling toward depression, with 40 million Americans out of work, and continued social distancing.” He mentioned also the “horrible choices” some people are having to make between staying the requisite six feet from others and joining the protest marches that speak to their values in the aftermath of George Floyd’s death in Minneapolis. “Each would be enough in any given year,” he said. “All of these things at the same time is unfathomable. It’s a scary, shaky time. It’s unnerving.

“One of the things we’re yearning for is empathy,” he continued. “We’re not getting that from a lot of leadership.”

Our leaders, Rabbi Kirshner suggested, should be saying things like, “I know you’re hurting. I hope it will get better.” In his own session, he will work with traditional texts and the works of modern thinkers to explore “how we can express some of that empathy.” While Judaism is not uniquely positioned to offer such consolation, “it is morally incumbent upon us” to try. “If we do not offer a response, we have failed morally.

“Silence is complicity,” Rabbi Kirshner said. “We can’t do that.” Jews are able to “tuck in their tzitzit and hide our identity. African-Americans can’t do that.” In addition, he said, minority groups “are inordinately affected by unemployment and the pandemic.”

Rabbi Kirshner spoke of a sense of guilt in the face of the current unrest. Running down the list of black citizens killed by the police over the past several years, he asked, “Why did another black man have to die for us to march in the streets? It’s a painful moment. It didn’t need to happen.”

He did acknowledge that one positive result of the situation is the “moment of unity” forged across the Jewish world, with everyone “all doing the same thing. That never happened.” (He noted that even the memorials held after 9/11 were denominational.) Still, he fears that unity will be short-lived.

In his June 20 presentation, “The Only Way Around is Through: Coping with Grief,” Rabbi Chaim Poupko of Congregation Ahavath Torah.  which is Orthodox, will share “familiar stories and age-old teachings to better understand how we can support ourselves and one another through difficult times. In a time when so many are struggling with loss and uncertainty, it is more important than ever to draw upon wisdom and experience for guidance and insight.”

In an email, Rabbi Poupo noted that “The current pandemic has brought grief and coping into the spotlight. Though each of us reacts in different ways, many of us are experiencing various kinds of grief over the loss of normalcy, the economic fallout, the growing uncertainty in our lives, or the actual loss of a loved one. Our capacity to thrive under the current conditions has a lot to do with how we manage the emotions that result from confronting loss and crisis.

“Both ancient wisdom and contemporary psychology have much to offer the person experiencing grief. The starting point for much of the discussion is to confront our grief, acknowledge it, and think about how it is impacting our lives. It may sound trivial, but many of us tend to avoid even thinking about uncomfortable emotions and relegate them to the back of our minds. Truth be told, emotions have an impact on our lives even when we’re not paying attention to them. This talk will be about how to take the first steps in confronting grief and how to navigate that process as it unfolds.

What are the challenges that will face us as we emerge from social isolation? How will we cope with the emotional and spiritual challenges of coming together while staying safe? In his presentation on July 8, Rabbi Jordan Millstein, religious leader of Temple Sinai of Bergen County in Tenafly, which is Reform, will lead a discussion on this issue, although the specifics “will depend of what’s happening right then.

“Broadly speaking, I’ll be talking about what is,” Rabbi Millstein said. If he were giving his talk right now, he’d be looking toward congregational life — services, for example, or funerals — “exploring how to come out of this as the laws begin to change and more is allowed.”

While the Rabbinical Council of Bergen County recently made a decision authorizing outdoor minyanim under certain conditions, Rabbi Millstein said the North Jersey Board of Rabbis, the RCBC’s liberal counterpart, is discussing the matter, as are individual congregations. “Each congregation is looking into it, and some will pursue it,” he said. Implementing that course of action depends on factors such as location and resource, he added. “I assume that because the law will keep shifting, we’ll be making more decisions and more consequential decisions, particularly related to the High Holy Days.”

The decisions will have both emotional and spiritual implications, “and a big part of this will be discussing concrete issues that are challenges for us as different movements, a question of Jewish values on a fundamental level,” Rabbi Millstein said. At the top of what he called the value chart are health and safety. On the other hand, “The value of community is enormously strong. I expect to be addressing the social/psychological element because people need people. They’re yearning to be together on a deep level.

“For some, at Temple Sinai, they do everything on Zoom. As a Reform congregation, we’re in a better position to be able to adapt. Since we have more liberal interpretations, there’s more latitude for the congregation.”

One topic Rabbi Millstein wants to explore is “the actual meaning of community. Online vs. in-person: How are they different? What is a community online? Is it a legitimate use of the term community?

“We are an am, a people,” he continued. “That has a different connotation than a religion. That communal base of being together is fundamental to our spiritual practice and identity — so much so that people who don’t follow much of any religious practice still feel that the Jewish community is very important to them and they want to be present and part of things.”

To register for the programs, go to jccotp.org/virtual-community.