The book Ms. Levison found in her mailbox.

That’s when the Franklin Lakes resident opened her mail and found an 85-page book, “Changed,” by Tom Cantor.

It’s the story of how Mr. Cantor, the descendant of Orthodox rabbis, says he found peace and salvation through Jesus — and became rich enough to spend millions of dollars each years trying to convince other Jews to find Jesus too.

Ms. Levison, a member of Temple Emanuel of North Jersey, was not swayed by Mr. Cantor’s testimony.

Instead, she was infuriated. 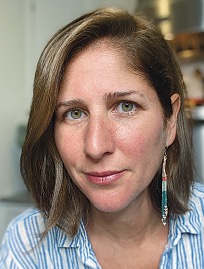 Normally, her public posts reflect the company she runs, called “Seasoned Moments,” which is “all about using food as a gateway for human connection.” On her Facebook page, that transltes into mouthwatering pictures of cocktails and food.

“The rampant anti-Semitism that is growing daily in this country is frightening. Now, I’m being attacked in my own home with this — encouraging me to go from lost and defiled (being Jewish) to found and cleansed (Christian). Why are millions of dollars being spent to convert Jews in this country? Hello, modern-day Crusades. When will the Inquisition begin?”

“I was really incensed to say the least,” she said in an interview. “When it arrived in my mailbox, it was on the heels of two weeks straight of rabid anti-Semitism and anti-Semitic incidents that had been happening” in the news. “It really felt so intrusive to get it in the mailbox. It felt like a real affront.”

Ms. Levison assumes that her name was bought from a mailing list of Jewish-sounding names. “It was not uniformly sent to all the Jewish people in my town,” she said. But she wasn’t the only person in the area to receive it — and she has friends from across the country who received a copy in the mail as well.

It turns out that Mr. Cantor has been enraging Jews with his proselytizing efforts for years. He reportedly spends $4 million years on this mission under the banner of Israel Restoration Ministries.

All this money, however, is not buying him good reviews on Goodreads.com, where reviewers report receiving unsolicited copies of the book and being underwhelmed.

One reviewer, Angela, describes “Changed” as “a short, autobiographical read about one man’s (self-centered) wish to ‘cleanse’ himself and find peace with his past. That sounds pretty standard, even if uninspired, until you realize that it’s also a thinly-veiled conversion tale about a man who becomes a Christian after being Jewish in an attempt to not feel dirty about his wife’s rape and subsequent pregnancy by an attacker. While they experienced this situation back in 1970, when responses to sexual assault were definitely different and less supportive, this book was published in 2020 and one would hope that Cantor could have changed in the past 50 years. But no, the book repeatedly refers to his wife as being impure and ‘defiled.’”

Tommy Frisch summarized it like this: “It’s the story of a man who made it through fifty years and two major religions, and still hasn’t managed to find a way to respect his wife as a human being. I could not recommend this book any less, and I hate that the thoughts it embodies were not extinguished long before they were ever written and published.”

Ms. Levison was born in Israel. She came to America when she was 81⁄2 years old. “From the time I was 9 I’ve experienced proselytism,” she said. “I was told I was going to go to hell because I was Jewish.

“I’ve had plenty of experience with born-again Christians trying to convert me. When someone has so much passion and love for something, I’m interested in it I want to hear what they’re so excited about. I’ve had respectful conversations where someone told me their love for Jesus. It’s interesting to see when someone’s eyes light up when they’re talking about it. I want to understand what they love so much, what their passionate about.

“What I take issue with is when you tell me that what I’m doing is wrong. I take issue when someone says, ‘You’re wrong, you’re going to hell, Jews are bad.’ I’ve encountered that over and over in my life and learned how to respectfully step away from it.

“This book felt like a ‘You’re wrong’ message. What you’re doing is bad and filthy and I want to save your soul, not because I care about you but because that makes me better in the eye of God.

“It makes me sad. This person has invested millions of dollars sending out this book. If you took the money and fed hungry people or invested in education, you would have a better and more just society. Instead I have to be made to feel bad in my own home.”

Is there anything the Jewish community should be doing about this?

“I don’t know what the response can and should be,” Ms. Levison said. “I got riled up — and then I calmed down.”

She’s coming to think that revenge, in this case, is a dish best served through the mail. She’s working with a friend on this project.

“We’ll send him mail as well,” she said. “It’s going to be a continued effort of weekly harassment. It’s not hate mail — it’s going to be a lot more civil than hate mail. We’re going to be telling him it’s not appropriate. You should use your money in better ways.”