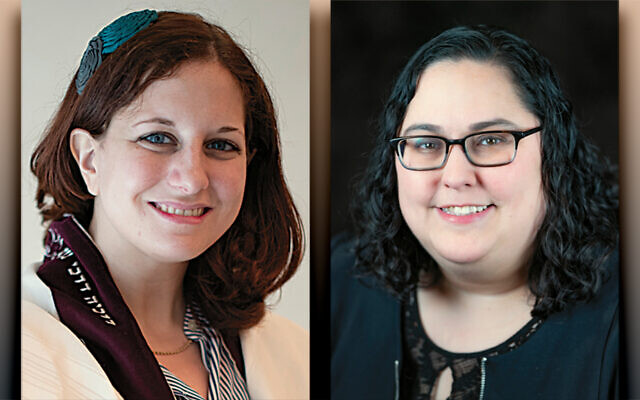 Imagine starting a new job — one that hinges largely on getting to know your colleagues, consumers, and the community — during the covid crisis, when masks hide smiles and in-person gatherings are kept artificially small.

As of August 1, Rabbi Rachel Salston will assume the religious leadership of the Fair Lawn Jewish Center/Congregation B’nai Israel, “and I’ve been doing a lot of preparation since May,” she said. “I’m very impressed with the passion of the community and their excitement about remaining connected” — in whatever form that connection manifests itself. “With the help of the community, I hope to reach people of all ages and encourage as much communal participation as possible.”

Even in this newly disconnected world, Rabbi Salston has managed to take some socially distanced walks with congregants and has found time to notice that “Fair Lawn is absolutely lovely, with restaurants, groceries, and Zaydies,” the bakery.

“This has been an uncommon hiring process, amidst covid-19, but I am so glad that we have found each other,” she continued only. “I think FLJC/CBI is a wonderful fit for me. Even though I have been to the synagogue once in person, I feel at home in the community, which is so much more than the building.

“We are a community that cares about each other, prayer, and Judaism.”

Rabbi Salston, who grew up in East Brunswick, is an old hand at Zoom meetings. “I interviewed for a job via Zoom when I was living in Israel during rabbinical school and applying for a job in Los Angeles,” she said. “And I used it for seminars during my first year in rabbinical school. It’s nothing new for me.”

While she realizes that not all her Fair Lawn congregants will be quite so comfortable in this virtual world, “I’m working on it,” she said. “One of my goals is to try to do a lot of outreach — phone calls and video calls.” She wants to reach people where they are, whether helping them access content online or providing rides for them, if they need it. “I want to find connections with the community that will help us live a Jewish life together,” she said, noting that her plan for inreach, a focus on the congregation itself, will “include those who rarely come through the synagogue’s doors.

Rabbi Salston is a graduate of Brandeis University, where she received her BA in neuroscience. She was ordained at the Ziegler School of Rabbinic Studies in Los Angeles — the Conservative movement’s West Coast seminary — and then was offered the opportunity to come back to the New York metropolitan area. She was the ritual director of the Park Synagogue on Manhattan’s Upper East Side from 2018 to 2019, and later she was resident in chaplaincy at New Jersey’s Robert Wood Johnson University Hospital.

Among her strengths, she said, “is that I like to listen to people.” In addition, “I’m very committed to tradition and ritual — those aspects of Judaism are what speak to me. She also likes doing things with her hands. “I do a lot of crafting, needlework, sewing,” she said, and she’s done a good deal of that during the pandemic, particularly sewing and donating masks. She also bakes her own challah (though since she discovered Zaydies, she said, she has not been doing it quite so often).

Rabbi Salston noted that her new congregation’s Hebrew school recently merged with the one at the Paramus Jewish Community Center. She certainly will have a role in the school, but she doesn’t know yet whether that role will be in person or not.

“I’m very excited to find out what this will be like,” she said. “It’s a strange time.”

As she prepares for the upcoming High Holiday season, “in Elul and Tishrei, I hope to make many telephone and Zoom calls to our members to check in on how they are coping, reflecting on the past year, and thinking about teshuvah, tefillah, and tzedakah, the three actions of the High Holiday season,” she said. “I hope to offer discussions and hands-on Zoom programs. If yeast becomes more readily available, I hope to start off with a Zoom challah baking program hosted from my kitchen!

“It’s not worth trying to imagine a parallel universe,” Rabbi Salston said. “I’m trying to figure out the best way to make this transition happen.”

Cantor Meara Lebovitz already is on the job at Temple Beth Sholom of New City. She’s originally from Cherry Hill and came to the congregation from Brooklyn, after many internships and at least three changes of career. In May 2020, she received ordination from Hebrew Union College.

The short version of her resume includes a six-year stint as High Holiday cantorial soloist at Hillel of the University of Pennsylvania. She also was a Trumah fellow at Kehillat HaLev in Tel Aviv; the director of Jewish life at URJ 6 Points Sports Academy in Greenboro, NC; religious school teacher and b’nai mitzvah tutor at Temple Shaaray Tefila in Manhattan, and she held several internships in Connecticut, New York, and Pennsylvania, most recently as cantorial intern at Reform Congregation Oheb Sholom in Reading. She is also a long-time community leader, having volunteered in three different positions with the American Red Cross.

Right now, though, “I am where I belong,” Cantor Lebovitz said.

Her journey began with music and came full circle. First came a degree in music education. Then came TV production, leading to a job with a morning show in Philadelphia. Next came the realization that Gratz College was right there, within reach. “This is where I was supposed to be, back in the Jewish world,” she said. Earning a master’s in Jewish communal service, Cantor Lebovitz began to organize programming for synagogues, only to find that she often was on the bimah singing with the guests. “It was not in my job description, but it happened more and more,” she said. “A light bulb went off. This is what I’m supposed to be doing.”

Cantor Lebovitz said that in her new position, her duties will be “pretty typical of what you would expect — working with b’nai mitzvah students, doing music with the religious school and preschool students, services, and pastoral responsibilities. And we’re already knee deep, neck deep, in High Holiday plans. It will be completely virtual,” she added, noting that “there was no class in school about online tefillah.

“At this point, our older congregants have adapted and are comfortable” with virtual learning, she continued. “I was in a Torah study group a few weeks ago and had congregants along the entire age spectrum. They figured it out.” However, she still intends “to make sure we’re not missing people. At this point, we think we’ve been able to reach people who would otherwise have been marginalized, technology wise.”

Her first priority, she said, is “getting to know people” when you can’t see them. “I don’t know of a more challenging time to be a cantor and start a new position. My goal is to meet the community, and this makes it so much more challenging.” She is “passionate about disaster relief,” she said, and hopes she can involve the congregation in this work, both as a synagogue and as individual households.

She also is busy “learning a lot about the dynamics of being a Jew in Rockland County. You don’t fully understand it until you’re here. I’m still wrapping my head around it.” In Cherry Hill, “I grew up surrounded by synagogues” of various denominations. The area where she lives now is predominantly ultra-Orthodox. “I’m still in the fact-finding stage,” she said.

She is excited to see “a core of really excited and involved and vibrant young families that are champing at the bit, waiting for the moment when the world opens up again.” At a farewell service for Cantor Anna Zhar, her predecessor, “we did a family service. There was a line of kids in the parking lot singing with us. And Cantor Anna invited me to sing with her. It was so menschy.

“It was incredible to see the amount of youth that exists there. I can’t wait to dive in and get to know them better.”

Another of her passions clearly is personal connection. As she wrote to the congregation early in her tenure, “As a cantor, I offer my heart — joining congregants on the journey of Jewish life and learning, being present in times of crisis and sharing in times of joy. Together, we can help each person find their own voice, their own song to sing, their own connection to our Jewish story.”

Another passion is Broadway. Cantor Lebovitz describes herself as a “Broadway lottery enthusiast,” scoring such victories as seeing “Hamilton” and “Harry Potter” twice each. “I’m darn good at it,” she said. “You have to enter every day, be consistent. It doesn’t matter if you can’t go.” She also has attended the Tony Awards.

Her congregation produces beautiful music, she said. “Our incredible choir is full of committed people who are the core of what we do musically. I cannot wait to make music with them.”