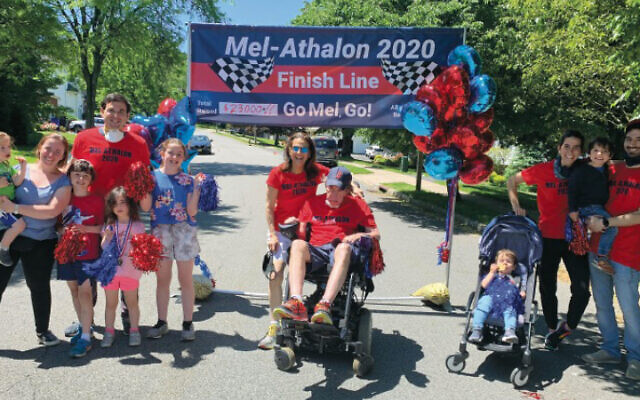 Arline and Mel Schwechter are with their son and daughter-in-law, Evan and Melissa Schwechter, and Matthew, Benjy, Julie, and Sophie on the left; and their daughter and son-in-law Suzanne and Jeffrey Rubin with Asher and Ezra.

Arline Schwechter of Englewood got the call that changed her life on Memorial Day weekend three years ago. A police officer in Virginia told her that her husband, Mel, was in a coma after suffering a traumatic brain injury in a cycling accident.

A triathlete and marathon runner, Mr. Schwechter was a partner and head of the International Trade-Compliance Team at the law firm BakerHostetler. He was doing a 22-mile bike ride from Georgetown to Mount Vernon during the firm’s weekend retreat in Washington.

Although he was wearing a helmet, Mr. Schwechter sustained injuries to his front temporal lobe and brainstem. It took a month for him to regain consciousness. He then spent three months in Kessler Institute for Rehabilitation in West Orange, followed by sub-acute rehab in the Jewish Home at Rockleigh.

Finally, that November, he returned to the home where the Schwechters now have lived for 40 years. Ms. Schwechter, an occupational therapist and the CEO of local medical supply company Longevity, adapted the house for her newly quadriplegic husband and his full-time aide.

“He can’t talk, he can’t eat, he can’t do anything with his hands, and he’s been in and out of ICUs and rehab centers for two years,” Ms. Schwechter said. “But he has a will of iron and the heart of a 40-year-old. He is all there. He knows what is going on.”

On May 11, Ms. Schwechter was watching “Rise Up New York! The Robin Hood Relief Benefit,” a telethon to raise money for New Yorkers affected by covid-19 and the organizations that support them.

“It got me thinking about local needs,” she said. “It’s crazy that there are people here in my city who don’t have enough to eat, and I wanted to help them.”

She called Carol Rauscher, president and CEO of the Englewood Chamber of Commerce, seeking a recommendation for a worthy organization. Ms. Rauscher suggested Bergen Family Center, which provides a range of social services in all times, and has been providing and delivering food during the covid crisis.

Ms. Schwechter called the director of BFC, Alexis Cooperman, and sent her a check. “And then it occurred to me to try to raise $5,000.”

She decided to do this by involving her husband in a version of an activity he always loved: jogging around their neighborhood. The “Mel-Athalon,” as Ms. Schwechter dubbed the May 31 event, sought to raise $25,000 for BFC. Sponsors pledged money for five laps around the block, which Mr. Schwechter would complete in his power wheelchair.

On May 21, Ms. Schwechter made up a flyer and sent it to friend and family on her email list. Friends from Teaneck encouraged her to start a GoFundMe page as well. “Any amount will help put food on the table for the many who have lost their jobs due to Covid-19 and are in need,” Ms. Schwechter wrote on the page, https://www.gofundme.com/f/melathalon.

The fundraising goal was met.

“Every day I’d read Mel the list of people who donated and commented, and he’d smile from ear to ear,” Ms. Schwechter reporter. “Some of the people he hadn’t heard from in years.”

On the day of the Mel-Athalon, Harry Martin, an Emmy-winning television journalist and a trustee for the Bergen Family Center, came to capture it on video. A local business, Party With Us, provided balloons. Ms. Schwechter baked cookies and ordered red t-shirts imprinted with “MEL-ATHALON 2020” on the front and “SCHWECHTER 007” on the back, “because my husband is a James Bond and Godfather freak.”

Mr. Rubin, the president of Testrite Visual in Hackensack, created a banner for the finish line.

“We went around the block five times and during every lap people were out cheering him on and marching along at a safe distance,” Ms. Schwechter said. “My 3-year-old grandson’s job was to honk every time he completed a lap.”

Mr. Schwechter’s communication difficulties did not keep him from expressing his happiness. “He is thrilled that he was able to raise funds for Bergen Family and thrilled that his peeps supported him,” said Ms. Schwechter. She describes her husband of 47 years as “a quiet guy, a real solid mensch of a human being.”

Ms. Rauscher said the Mel-Athalon was “a very moving event. Mel and Arline are very special people and received great support to help Bergen Family Center. It is a wonderful thing they did.”

The group’s president and CEO, Mitch Schonfeld, was moved by the gift.

“Faced with terrible grief and horrific obstacles, Mel, like Job, is tested beyond what anyone can be expected to endure,” he said. “He feeds us spiritually by maintaining his dignity, acting humanely, affirming life and helping others. It is only fitting, that the athlete he is, would have him go the extra mile to nourish our community physically.

“The $25,000 raised by him, his wife Arline, his family, friends, and colleagues who honor and celebrate him, will feed hundreds of our local families through the summer. We are immeasurably grateful.”