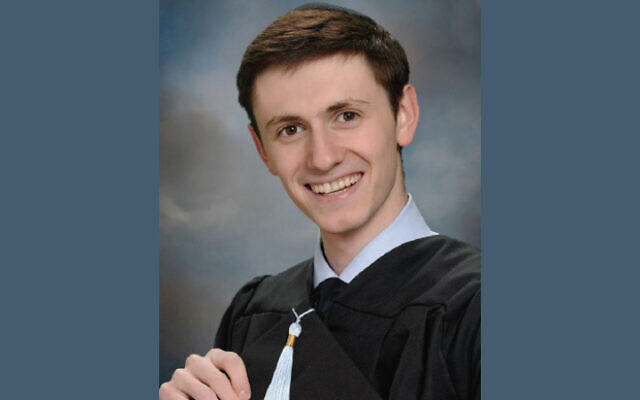 If not for covid-19, Cory Jacob Glicksman — that’s his formal name, but he’s more often known as CJ — would have delivered his valedictory speech at Yeshiva University’s 89th annual commencement exercises on May 26 at the Hulu Theater at Madison Square Garden in midtown Manhattan.

Instead, his prerecorded address was streamed as part of an online graduation ceremony on June 14.

This was not the first time the pandemic caused an unexpected turn of events for the 22-year-old from Teaneck.

“I was a resident adviser on campus this year, and the first student at YU who got covid was on my floor,” Mr. Glicksman said. “The whole floor had to go on lockdown. It was a crazy year because of everything going on, but I’ve grown a lot from the experience.”

Mr. Glicksman was one of eight undergraduate valedictorians from different YU programs. He represented Yeshiva College, the men’s undergraduate liberal arts and sciences college. He has a sterling grade-point average, and he was deeply involved in campus life since coming to YU after a gap year at Yeshivat Har Etzion in Israel.

“I’ve tried to step up to the plate and give back to the university,” Mr. Glicksman said.

While pursuing a double major in philosophy and music — and YU’s double program of secular and Judaic studies — he worked with undergraduate and graduate students as a peer tutor, writing center tutor, and vice president of the Yeshiva College Student Association. He participated in the MafTeach Chinuch Fellowship at YU’s Azrieli Graduate School of Jewish Education and Administration, which affords undergrads a taste of Jewish education as a career option. In addition to monthly seminars, the program’s fellows made field trips to local schools, including the Idea School in Tenafly. They also traveled across the country to other Jewish schools; Mr. Glicksman went to Los Angeles three times to work with teachers at Harkham Hillel Hebrew Academy.

During his second year on campus, he was one of two campus fellows for the Organization for the Resolution of Agunot. The ORA Campus Fellowship is a leadership training program educating students about religious divorce refusal, domestic abuse, and halakhic prenuptial agreements. “My cousin had done it the year before and told me about it, and it seemed like a really valuable thing to be part of,” Mr. Glicksman said. The fellows even had the authority to notarize prenup agreements for classmates who were getting married.

Mr. Glicksman’s penchant for community service started early. After graduating from Yeshiva University’s High School for Boys — that’s the school often known as MTA — in 2016, he taught Hebrew language and liturgy in a Lauder Foundation camp near Krakow. There, he worked with 180 Polish Jews of all ages.

During two of his college summer breaks, Mr. Glicksman went to the southern Israeli city of Arad to work with disadvantaged teens through YU’s Counterpoint Israel service-learning initiative. The YU students help young Israelis boost their self-esteem and Jewish values along with their English and computer skills, gaining a sense of civic responsibility in return. Mr. Glicksman stays in touch with some of the campers.

“Before that, I’d had zero exposure to nonreligious Jewish Israeli communities,” he said. “It’s a very different culture. But working with these kids, you realize you have this commonality of being Jewish. They really look up to you and you’re able to form bonds in a way I’ve never experienced before.

“I was a little scared to teach these tough Israeli kids, and at some point I realized they’re just like anyone else — they just want attention, to be loved and cared for.”

“I took a logic course with Dr. Johnson and fell in love with the course and the professor, and because of that I decided to take 21 elective credits in logic, math, and computer science along with my degree requirements,” Mr. Glicksman said. Dr. Johnson is “a religious Christian, and to have a religious outlook on philosophy is very valuable.”

From Dr. Beliavsky, he added, “I learned to understand music subjectively, aesthetically, and culturally, and at the same time learned the scientific and analytic mechanics of music theory.”

Mr. Glicksman said his years at YU “have really been the most life-changing and formative years of my life thus far. I have grown and changed tremendously academically and socially. I’ve matured as a person and as a ben Torah and eved Hashem” — as a Torah-observant Jew and a servant of God. “I’m coming out of my years at YU a different person than when I came in, and I’m incredibly grateful to YU for what they’ve been able to give me and what I’ve been able to gain.”

He’s not quite done at the Washington Heights campus, however. Next year, he plans to work at SAR High School in Riverdale as a Beit Midrash Fellow, during which he hopes “to gain a better sense of how I might enjoy teaching and decide whether to subsequently pursue a degree at one of YU’s graduate schools as well as semicha,” rabbinical ordination.

Mr. Glicksman is the oldest of five children of Yitzy and Deborah Glicksman. The family belongs to the Young Israel of Teaneck.