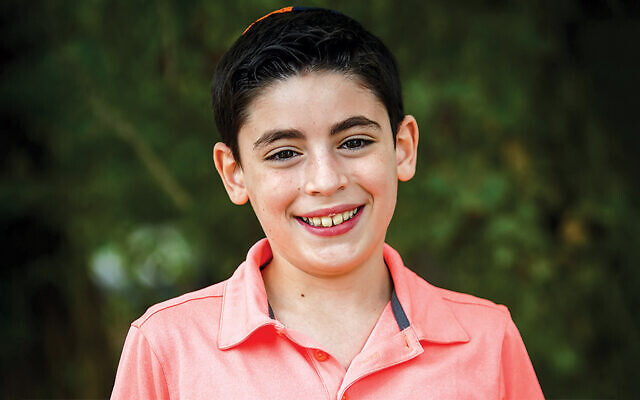 What is especially remarkable about Micky’s accomplishment is that sixth grade is the youngest age eligible for the famously difficult competition, so he had no prior experience. Often, contestants who place in the top three of their divisions already had competed; it’s rare for a student to win the first time.

Organized by the Jewish Agency’s Department for Jewish Zionist Education, the annual contest requires an ability to match biblical quotations with the person who said them or about whom they were said, recognize where a passage is from and its narrative context, pinpoint where a particular event occurred, and other feats of textual familiarity.

Rabbi Dovi Nadel, the coordinator of the National Bible Quiz, said that the top 200 out of more than 500 students from some 80 schools or clubs around the country were invited to compete in the final round. Normally, that round takes place live in New York, but this year and last year it happened only online. Each contestant had an individually assigned proctor who monitored the test-taking via webcam. 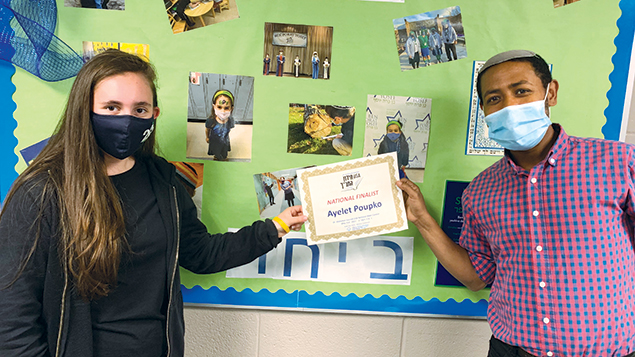 Ayelet Poupko and her teacher, Rav Aviv Abebe, are at Ben Porat Yosef.

The 2020-2021 syllabus included the entire books of Deuteronomy and 2 Samuel,  in addition to parts of Job and Daniel. (“Tanach” is the Hebrew acronym for the Torah — the Five Books of Moses — Nevi’im — Prophets — and Ketuvim — Writings).

Micky studied the required chapters with his father, Owen. Then he created a spreadsheet and pasted all the verses that mentioned places, names, and numbers into it.

“I tried to go over it as much as possible. The week before the test, I studied some review questions and went over them with my dad,” he said.

“Learning for the Chidon has been amazing. I enjoyed making connections to other parts of Tanach that I’m learning in school,” he added. “I look forward to doing it again next year.”

Micky said that he found one matching section on the quiz particularly difficult. 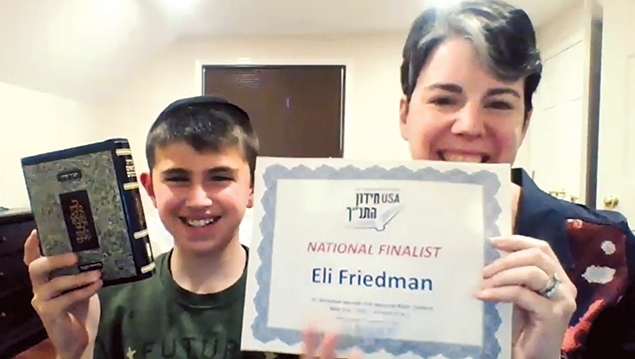 Eli Friedman and his mother, Dr. Ilana Friedman. The Yavneh Academy in Paramus student placed third in the Hebrew 6-7 division of the National Bible Quiz.

“There are several pesukim” — verses — “in the Chidon material that mention a mitzvah, like Shabbos, in connection with a reference to yetziat Mitzrayim,” the exodus from Egypt, he said. “The test listed excerpts from those pesukim that describe the mitzvot in one column and the parts of the pesukim that mention yetziat Mitzrayim in another column. We had to match each mitzvah with the corresponding version of yetziat Mitzrayim. This was actually one of the questions that we had anticipated, but studying for it was very hard. I remember two of the yetziat Mitzrayim quotes were identical except for one word.”

Ayelet Poupko of Englewood, who placed second in the Hebrew 8 division, pinpointed the same section as especially challenging. She attends Ben Porat Yosef in Paramus and has been competing each year since sixth grade.

“I love learning Tanach,” Ayelet said. “Studying for the Chidon has deepened my understanding, as I am looking for tiny details and seeing the text in a new way.”

She added that her parents, Dr. Shoshana and Rabbi Chaim Poupko — he is the spiritual leader of Congregation Ahavath Torah — both competed in the Chidon HaTanach in their youth.

Ayelet said she was grateful to Ben Porat Yosef teacher Rabbi Aviv Abebe for coaching a group of students for the quiz once a week. “He was such a role model for me in his love of learning Torah, and the energy he brings to learning Torah is helpful for me to watch and to learn from,” she said. 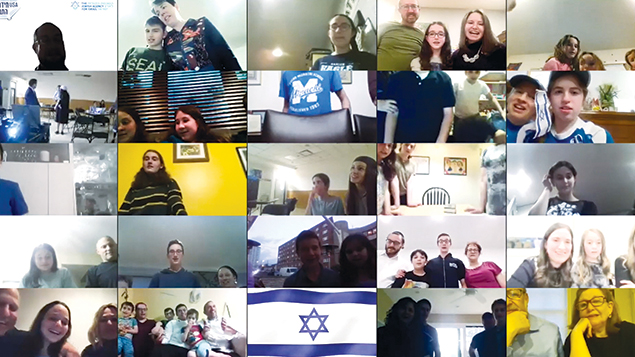 In the fall, Ayelet will begin high school at Ma’ayanot Yeshiva High School for Girls in Teaneck.

The winners of the high school levels of the Bible quiz receive a free trip to Israel the following year for the international round, although foreign participants competed virtually from home in 2020 and 2021.

The most recent contest, on April 15, 2021 — Israeli Independence Day — saw outstanding performances by American contestants. Beni Romm, 17, of White Plains, a student at the Frisch School in Paramus, placed third, while fifth place was claimed by Elana Rosenblatt, 17, of Highland Park and Bruriah High School in Elizabeth.

The national round is named in honor of former Chidon HaTanach Chairman Shimshon Aryeh Isseroff, who was born in Jerusalem in 1920 and now lives in Teaneck. A pioneer in using visual aids in the classroom, Dr. Isseroff enjoyed a long career at the Board of Jewish Education and was among the founders of Camp Morasha in Lake Como, Pennsylvania.

“To name our program the Dr. Shimshon Isseroff USA Chidon HaTanach is to pay tribute to the essence of this program,” Rabbi Nadel said. “This is a program that not only unites students around the country and the world, but it also unites generations through the study of Tanach. We are blessed to honor the legacy of a tremendous educator such as Dr. Isseroff as we continue our mission of imbuing another generation of ‘Chidon Students’ with a deep and enduring love of Tanach study.”