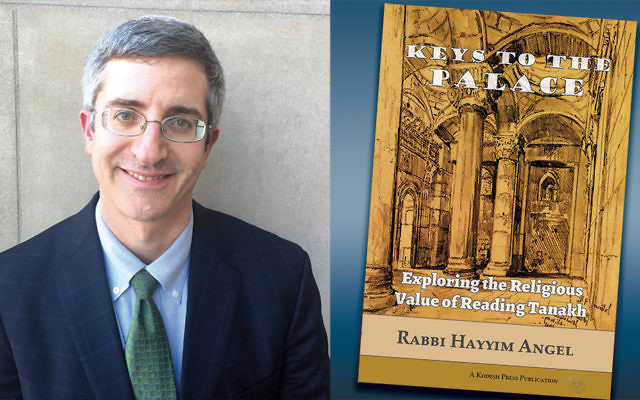 It’s not so easy being a Bible lover in the Orthodox Jewish community.

Talmud, not Bible, takes pride of place in an advanced yeshiva curriculum. It is the Talmud, after all, that defined how the divine imperatives of the Torah became day-to-day halacha — Jewish law.

As a result, although they do hear the weekly Torah portion read aloud in synagogue, Orthodox Jews are not liable to study all that much of the rest of the Bible.

If it were up to Rabbi Hayyim Angel of Teaneck that would not necessarily be so.

Rabbi Angel is part of a small cadre of modern Orthodox teachers who have put Tanach — the five books of Moses, Prophets, and Writings that make up the Hebrew Bible — at the center of their study, teaching, and writing.

Writing: Rabbi Angel’s 13th book has just come out, and it is being celebrated this week in Paramus (see box.) “Keys to the Palace: Essays Exploring the Religious Value of Reading the Bible” features his own studies of biblical passages as well as his reviews of works by colleagues in the field of Orthodox biblical interpretation. Last year, Rabbi Angel published “Haggai, Zechariah, and Malachi: Prophecy in an Age of Uncertainty,” a volume in the Maggid Studies in Tanach series.

Teaching: Rabbi Angel, 48, is on the faculty at Yeshiva University, where he received a joint bachelor’s and master’s degree in Bible and interpretation. This semester — his 45th — he is teaching courses on Numbers, Joshua, and Psalms. He is teaching a course on Monday afternoons in Teaneck’s Lamdeinu: The Center for Jewish Learning about arguably the least studied book of the Bible, Divrei Hayamim — that’s Chronicles in English. He also travels around the country, teaching on behalf of the Institute for Jewish Ideas and Ideals.

Study: The study of Tanach, Rabbi Angel says, is “an amazing experience. It brings all the different parts of my being together. It’s a great way to connect to God.”

As a child, Hayyim Angel enjoyed his Bible studies in elementary school and “to some extent in high school. I got much more turned on to it in Israel, learning it on my own” when he was studying in yeshiva in Israel. (The primary curriculum there, of course, was Talmud).

“I picked up a Tanach and realized I didn’t really know what was going on with it,” he said. “Out of sheer curiosity I opened it up and fell in love with it. I realized there was a world in there that I was loving.”

During that year in Israel, he read the Bible from cover to cover. Then he began studying it slowly and in depth. “Reading it fast, you’re looking for the story,” he said. “When you get to things like the Book of Isaiah, you realize you don’t understand it. I learned how to sit on a passage and figure out what it’s trying to teach.”

So, having studied the whole Bible, from Genesis to Chronicles, does he have a favorite book?

“Every single book has its own excitement,” he said. “It’s own challenge, it’s own learning methodology. They’re all great.”

Everyone is familiar with Genesis, at the beginning of the Bible. But what about Chronicles, at the far end? What is seen as generally boring about the book — the fact that it retells the stories of Samuel and Kings — is, for Rabbi Angel, “what makes Divrei Hayaminm spectacular” to study and teach.

“It’s told from a very different point of view than Samuel and Kings, and includes and excludes different material,” he said. “This reminds us that Samuel and Kings could have been written in a different way. Prophets have to make significant decisions on what to include and exclude. You can see how a different prophet can tell a different story. It gives you a way into prophecy the way no other book does.”

If this sounds interesting, note that his class at Lamdeinu began just this week. It offers “a careful reading of the text, analysis, a survey of classical and contemporary scholarship.” The texts are taught in English translation. “Intelligent people can follow along,” he said.

At Yeshiva University, Rabbi Angel deals with college students who sometimes have to unlearn misconceptions they picked up in their earlier studies. “The classic problem in many yeshivot is they don’t know what’s in the text of the Torah, and what’s in the midrash or Rashi. The midrashim teach religious lessons, and are very important, but when you think that’s in the text it’s hard to learn either the text or the midrash properly.” Take, for example, the verse Exodus 2:5, which tells us that Pharaoh’s daughter is bathing in the Nile when she sees the basket holding baby Moses. Then the Torah says of the princess: “vayishlach at amatah.” Rashi offers two interpretations. The first is the literal meaning — she sent forth her servant to get the basket. The second is a midrash, and is more fanciful — she extended her arm, which magically stretched far beyond its usual length. It’s a great story, and would make a great special effect in the movie version, but it’s not the plain meaning of the words.

He also finds that yeshiva high school graduates “aren’t used to rigorous learning of Tanach. My challenge is to get them to see it’s a high-level learning opportunity.” On the other hand, “many of my students are among the best undergraduate Tanach learners in the country,” he said.

Rabbi Angel also has turned his attention to the question of how children in Jewish day schools should be taught Tanach. He is working on developing a new Tanach curriculum for Ben Porat Yosef Yeshiva Day School in Paramus.

“The major effort is to present a program that is engaging to children and teaches skills and content in a rigorous way, while always inspiring them with the religious messages of the text,” he said. “We want to build toward something for the future, rather than just giving the students stories. We want to build a base for the next level of their education. We don’t want to have to undo their elementary knowledge when they’re in high school and college.”

Rabbi Angel believes that Tanach “is the ultimate bridge-builder in the Jewish community. It doesn’t have boundaries. It’s God revealing His words for all time.

“I find that when studying Tanach with people of different ideologies, temperaments, and backgrounds, it brings everybody together.”

What: Book reception, class, and book signing to celebrate launch of “Keys to the Palace” by Rabbi Hayyim Angel