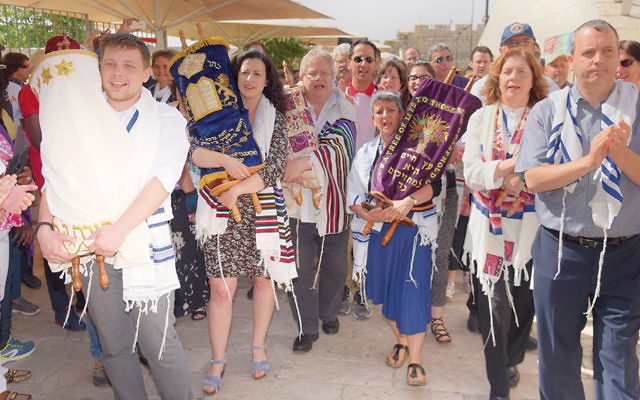 WUPJ members march to the Kotel; the people carrying sifrei Torah are from Russia, Germany, the UK, and Israel.

There is something resonant about Jerusalem — something deeply, inexplicably, indefinably emotionally resonant. Something about the history and the stone and the view and the hills and the harsh starkness of it all. And of course the light.

Maybe that’s why the World Union for Progressive Judaism — here at home, in the United States, its member synagogues are Reform, but they use other labels in other parts of the world — chooses to have every other of its biennial conferences there. The Reform movement is not particularly strong in Israel, but this year’s conference, held in May, drew the largest crowd it’s ever attracted. “There were 450 people from 30 countries,” its president, Rabbi Daniel Freelander of Ridgewood, said. (To be clear, the Reform movement has much larger meetings, particularly in North America; this one is specifically international.)

“It wasn’t mainly rabbis,” Rabbi Freelander continued. “There were maybe 90 rabbis, but there were a lot of congregational presidents and officers from all the regions around the world.”

Members of the World Union call themselves Reform, Liberal, or Progressive; each name is the result of the particular politics of the specific world in which each developed. “Each of the names has overtones in their countries,” Rabbi Freelander said. The groups developed in parallel but in different ways, so coming together every two years illuminates the different ways that history and the surrounding culture influence religious practice.

Out of the entire convention, four experiences stuck most with Rabbi Freelander. The first one was when a group went to Robinson’s Arch. The arch, a small space, is part of the Second Temple’s retaining wall, like the Kotel, the Western Wall. The Kotel, the iconic rough-hewn stone wall, is run as an open-air Orthodox synagogue; Robinson’s Arch, much smaller, tucked out of sight of the Kotel (although not always out of its rabbinate’s mind), is the place where egalitarian prayer is allowed.

“That Thursday, we went to Robinson’s Arch for the bat mitzvah of 13 South American women,” Rabbi Freelander said. They were celebrating becoming bat mitzvah then because they had not been allowed to do so at home until recently. That’s because the Reform movement went to South America with the German refugees who brought the movement with them in the 1930 and 40s. “It never really evolved,” Rabbi Freelander said; instead, it became a time capsule, a living history of German Jewish prewar life. “Men and women sat separately, but there was instrumental music,” he said. “It was not at all like classical Reform in this country, which is sui generis to America. German Reform evolved earlier; there, women could sing with men but still they could not sit with them.” They also could not read from the Torah. 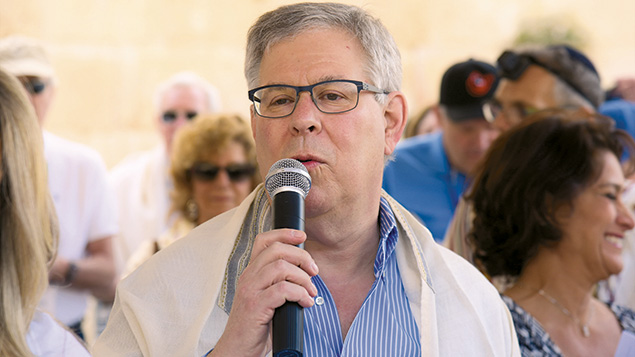 Rabbi Daniel Freelander of Ridgewood is the president of the WUPJ.

The women at the convention — mainly from Brazil, but including representatives from Chile and Argentina — “had been lobbying in their synagogues, almost like suffragists,” Rabbi Freelander said. “They had no ritual rights.”

The last World Union biennial conference had been in Sao Paolo, Rabbi Freelander said. “There is a 2,000-family congregation there — it is huge — and it is both Masorti and Reform.” (Masorti is the name for the Conservative movement outside North America.) “Men and women sat separately, and the women couldn’t read from the Torah.” Since then, that has changed, and the women celebrated that change. “It was a political struggle, and they marked it by all going to Jerusalem as a group,” he said. “And after the last woman read, we carried our Torah scrolls through, and marched to the upper plaza of the Kotel. There were 450 of us, and they let us through, with our scrolls, and we finished the rest of the service there.”

That’s a big deal. There have been major political struggles at the Kotel, women are not allowed to bring Torah scrolls into the women’s section, and often, when they try to pray as a group, their voices are drowned out by angry women standing close by and angry men hovering just on the other side of the mechitzah.

The Progressive Union group did not try to enter either the men’s or women’s sections; they did not attempt to draw close to the wall, much less touch it. But their presence even in the upper plaza, fenced off from the Kotel but not far from it, could have drawn protests. It did not. “We had one group aliyah with a Torah scroll in the upper plaza, and no one hassled us,” Rabbi Freelander said. “It felt very normal. It was such a contrast to the news stories we had just read. And to the last time we tried to bring a Torah scroll into the upper plaza.” Then, he said, there had been a fracas, and “I ended up really bruised from it.” He did not know why it was so much easier this time, but he appreciated it.

The conference participants were divided among seven buses as they drove throughout the city to explore various issues. “Fifty people went on a bus going to Gush Etzion,” a cluster of towns on the West Bank. There was a Labor Party politician on the bus, and a leader of the settlement movement. “There was a really good intellectual debate on the bus,” Rabbi Freelander said. Other groups talked to Russian immigrants, and about Jerusalem’s security fence. “Some took a bus to Beit Shemesh to learn about gender segregation,” he added. “That was the only one that got any pushback. People threw things at them. It was unfortunate.”

On the other, happier hand, another group talked to members of emerging progressive communities, including one that is Russian-speaking, and yet another group talked to Israeli rabbinic students. “HUC” — he was talking about the Jerusalem branch of Hebrew Union College, the Reform movement’s seminary — “has an Israeli-only curriculum for Israeli rabbinic students, and it will ordain its 100th Israeli-born rabbi this year. 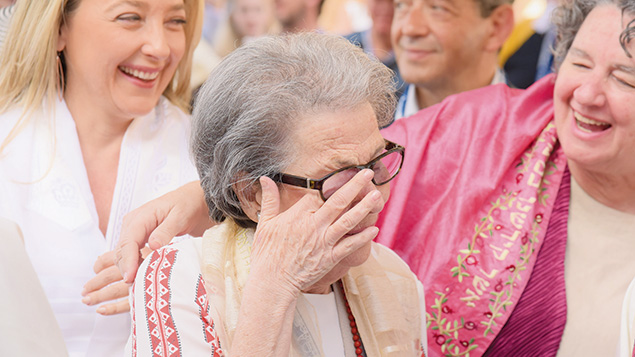 “Congregations can grow only when they have rabbis who really understand the communities they’re in,” he added; the hope is that Israeli leaders, rather than American ones, will be able to help liberal congregations gain a foothold in Israel.

On Friday night, the World Union welcomed in Shabbat at the Tachana Rishona — the city’s old train station, which has been renovated into a trendy open-air collections of shops, restaurants, and performance spaces, bounded by the old buildings and tracks that give it authenticity and gritty beauty. “Every Friday night there, they do a Kabbalat Shabbat,” Rabbi Freelander said. “This time, all eight Reform congregations in Jerusalem canceled their regular services and we did it together there. We had more than 1,000 people. It was amazing. It was an hour and a half, we had a band, and then everyone went to dinner in different congregants’ homes, from those eight congregations.

“People met before services, they sat with their Israeli hosts, and then they went back to their homes with them. It was a real high.

“And then, on Shabbat morning, we had Shacharit at our headquarters at Beit Shmuel. There were 34 rabbinic students from around the world, who study at Geiger College” — that’s Abraham Geiger College in Pottsdam, Germany — “and at Leo Baeck” — that’s the Leo Baeck College in London — “and from the seminary in Moscow” — that’s the brand-new Moscow Rabbinic Leadership Institute. “They led the service on Saturday morning. It was a very reassuring image, these young people, in their 20s and 30s, from around the world.”

The conference theme was milestones in innovation. “We were looking for the nexus between religious, cultural, and societal innovation,” Rabbi Freelander said. To that end, the main speakers were three Israelis who are members of Reform congregations — the well-known educator, activist, and speaker Yossi Abramowitz, the up-and-coming young Knesset member Stav Shafrir, and the owner of SodaStream, entrepreneur and realistic idealist Daniel Birnbaum.

“Birnbaum closed with a video of Bedouins, Palestinians, and Israelis working side by side,” Rabbi Freelander said. The video was made in his factory, and it had gone viral on YouTube.

“It was heartening and very beautiful.” In other words, he closed with hope — and also with reality.