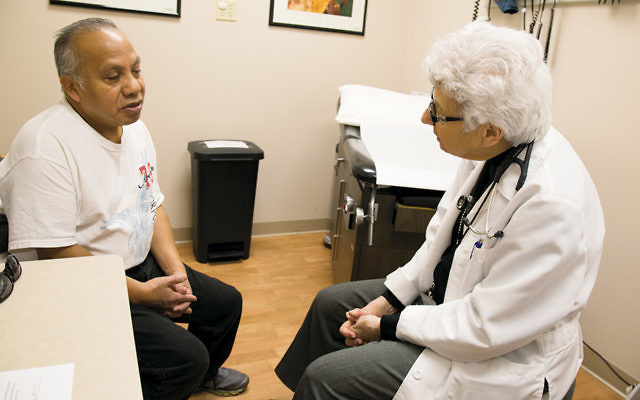 Nearly a decade ago, when she was at Friday night services at the Fair Lawn Jewish Center, Carole Feingold of Fair Lawn heard something that immediately caused her to “sit up straight.”

Dr. Samuel Cassell of Wyckoff, a retired family internist who had worked in Fair Lawn for many years, was speaking from the bimah, inviting others to share his dream. His goal, she said, was to provide primary care to low-income Bergen County residents who are working but don’t have insurance.

“When I saw him at the oneg, I said he must need help and I was interested. ‘You’re in,’ he said.”

Dr. Cassell’s dream, which culminated with the launching of the Bergen Volunteer Medical Initiative in 2009, did not spring to life overnight. “It took a lot of work behind the scenes,” Ms. Feingold said. In addition to recruiting volunteers and securing funding, Dr. Cassell connected with the Burlington, Vermont-based Volunteers in Medicine, learning from experts who had dealt with the challenges of developing free clinics at the local level.

“We learned a lot from them on how to proceed,” Ms. Feingold said. As for the volunteers whom Dr. Cassell buttonholed, as she put it, “they came from knowledge,” she said. “They were very valuable people, in fundraising, leadership, medical knowledge. Everybody sat at meetings and helped form BVMI.”

Today, the medical center — housed in Hackensack, originally on Moore Street and now in a larger facility on Essex Street — “has 55 clinicians who come on-site to BVMI, and a network of over 200 referral specialists who have agreed to see our patients in their own offices,” said Samantha Poremba, BVMI’s development coordinator. “We also have relationships with all five hospitals in Bergen County, who have agreed to see our patients.”

Ms. Poremba said that in 2016, the center served nearly 1,000 patients in more than 6,200 visits. “We have seen a 17 percent increase since moving to our new space and now have almost 1,100 patients,” she added. The facility is open five days a week, she added.

Clients must show proof that they live in Bergen County, that they are working, and that they meet income requirements. Ms. Feingold pointed out that the center does not accept any insurance. “If we didn’t exist, our clients would have no place to go for health care,” she said. “We’re their only stop health-wise.”

According to BVMI requirements, clients can earn up to 300 percent of the federal poverty level. Thus, one person can earn up to $36,180, and a family of four can earn up to $73,800. The center does not see children because New Jersey maintains the Children’s Health Insurance Program, or CHIP. BVMI does not receive any government funding, is not reimbursed by insurance companies, and does not charge patients for services it provides. Rather, it relies entirely on contributions from individuals, corporations, and foundations.

While people come in with a variety of medical complaints, “40 percent of BVMI’s patients are pre-diabetic or have diabetes,” Ms. Poremba said. The facility has a diabetes care and education program, led by diabetician Dr. Charlotte Sokol of Paramus. The program provides care to almost 450 patients.

Except for a few medical workers and members of the office staff, BVMI is run by a cadre of more than 100 clinical and nonclinical volunteers, including Dr. Sokol. A retired physician, “both my husband and I were looking for something to do,” she said. When she saw an article in the Jewish Standard about Dr. Cassell and his vision for medical care, “it inspired me to do it,” she continued. “I went to the first meeting — long before [BVMI] started.” Much of the staff is made up of retired physicians, she noted. “It’s very rewarding.” 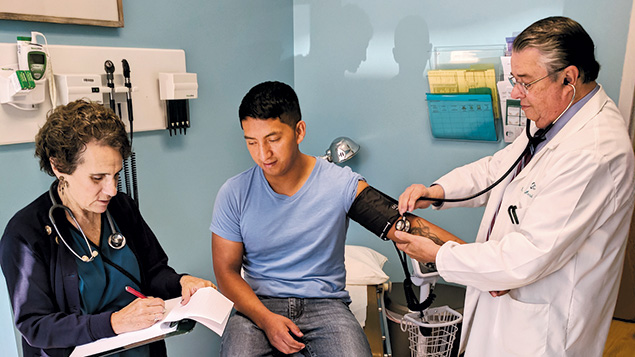 Ellen Menschel with a patient, Jorge, and a volunteer doctor.

Dr. Sokol, who works one day a week, said that when she began her work there, “I probably didn’t know, and I still don’t think we know,” the extent of the need for such services. She believes that “people in our area don’t know about it, because we’re not busy enough. I don’t think we know how many people need us. For some reason, we have not been able to reach them. I don’t know all the reasons.”

The doctor believes that the largest group of volunteer physicians at the center is Jewish. Of course, she pointed out, there are many non-Jewish volunteers as well. “I don’t know if it’s the nature of our upbringing that we feel we have to serve,” she said.

Dr. Sokol works solely with diabetics, because “that’s what I did before, and I prefer to do what I know best.” She also sat on the BVMI board until recently. Asked what she perceived to be patients’ greatest need, she said “immigration reform and protection. This is the most abused and overused population group. They’re not starving, but their working conditions are dreadful.”

Her patients, she said, work long hours, many days a week, and receive no benefits. “Just making an appointment is hard for them, and they all walk, since they have no transportation.” Still, she said, despite their hard lives, their money goes for the same things our own immigrant parents and grandparents saved for — “sending their kids to college.”

Ms. Feingold, like Dr. Sokol, brings a good deal of experience to BVMI. “I was a registered nurse but had let my license lapse so I could not work there,” she said. “You must have an active license to do hands-on work.” But because she spent 21 years working for a pharmaceutical company, she had a good deal of knowledge in that area.

The pharmacists on the volunteer planning committee discussed whether they should have a pharmacy on location at the very beginning of the process, she reported. “We all said absolutely not. Legally, we would have to be licensed. We decided not to go that route.” Instead, she created a formulary “of what drugs we would be writing for.” It was not good enough to say, for example, “antibiotics.” Rather, they had to be specific. “It didn’t come off the top of my head,” she said. “I went to various pharmacies and asked their opinions.” Ms. Feingold recalls spending about 10 hours a week engaged in that process.

Ms. Feingold, who is a longtime member of the Fair Lawn Jewish Center and a past officer of the town’s now-defunct chapter of American Jewish Congress, said that early in her career, when she was a new nursing school graduate, “I worked in the outpatient clinic of Barnert Hospital. I realized that these people do not get medical care. From that point on, I had a feeling for under-served populations. We all do,” she said of fellow volunteers. “Anyone who works with us wants to be there.

“As Jews, we need to help,” she continued. “No one helped us. We need to be aware of persecution. Saying, ‘throw them out; they don’t need health care’ is not a way to live your life or act as a role model for your children.” Her own two children, she said, have learned that lesson well.

Ellen Menschel of Glen Rock has been volunteering at BVMI for just over five years. “I read something in the Jewish Standard, and I also got emails from Jewish organizations describing volunteer opportunities,” she said.

Ms. Menschel, a nurse, works at the Hackensack facility one day a week. “I take patients to a private room and take their vital signs, get their current history, medications, and why they’re there,” she said. “Then I report to a doctor and enter it in the patient’s record.” Generally, she works with a specific doctor, but she may assist other doctors or nurse practitioners if they are particularly busy.

Volunteering is in her blood, she continued. “My whole life has been centered in growing up in a Jewish household where volunteering was very important. Both my parents volunteered. I was active in my synagogue, the Glen Rock Jewish Center, for about 18 years,” as sisterhood president, recording secretary, and social action chair. “Jews always have been known for giving back,” she said. Indeed, she pointed out, of the five people working during her Monday morning shift at BVMI, “four of us are Jewish.”

Ms. Menschel said that when she decided to retire from her position as a school nurse some five years ago, and was considering what to do as a volunteer, “BVMI was one of my choices. I knew I wanted to do work as a nurse, and to work with patients who couldn’t afford to pay.” She said she sees a significant number of diabetics, people with cardiac problems, and others who require blood pressure evaluations and nutritional counseling.

She said that nutrition is a big problem, “since many patients can’t afford fruits and vegetables. Some are eating only rice and potatoes.” In addition to speaking with them about a healthy diet, she also suggests ways people can exercise without having to join a gym. “Obesity is also a big problem,” she said, explaining that it leads to diabetes and heart problems. Another problem she sees is high stress levels.

“I find the work very fulfilling,” Ms. Menschel said. “This clinic is making health care available for patients who can’t afford to go to a private doctor.”