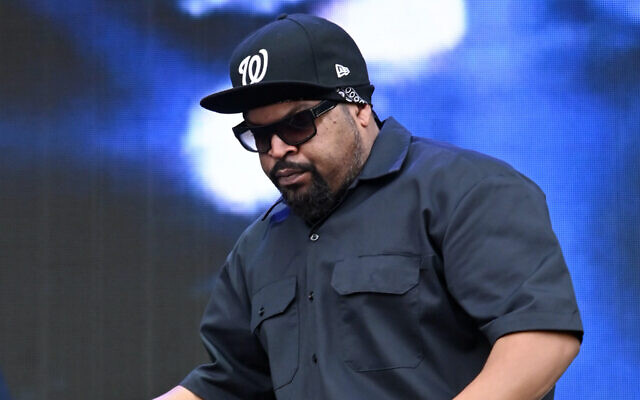 Ice Cube, shown in 2015, acknowledged his conversation with Jewish leader Mort Klein in a tweet in which he said "I admire him for the advocacy of his people." (Michael Buckner/Getty Images for CinemaCon)

Mort Klein didn’t know much about Ice Cube when he got on the phone with him on Monday afternoon, but by the end of their two-hour conversation, Klein said he was convinced the rapper was not anti-Semitic.

In fact, the president of the right-wing Zionist Organization of America said, the rapper had invited Klein and his wife to dinner — once the pandemic is over.

“He called me Mort,” Klein told the Jewish Telegraphic Agency. “He told me to call him Cube.”

I, Mort Klein, just had a 2 hour conversation with Ice Cube. We both grew up poor in Black hoods. Cube told me he thanked Jews for starting NAACP, many Black schools&fighting for Black civil rights.Cube told me he supports condemning Black&all antisemitism& I condemned all racism

“Strange bedfellows” would be too mild a term to describe the new relationship between the two men.

Ice Cube has drawn widespread condemnation after repeatedly tweeting anti-Semitic images and support for Nation of Islam leader Louis Farrakhan, who has disparaged Jews over the years, including comparing them to termites. Meanwhile, members of a leading Jewish group have filed complaints against Klein and the Zionist Organization of America for tweets and statements they say were Islamophobic and racist.

The phone call, which Klein said was set up by a mutual friend he declined to name, is the latest in a series of public rapprochements between Black celebrities accused of anti-Semitism and prominent Jews. Earlier this month, Nick Cannon sat down with a Los Angeles rabbi to learn about Judaism. The host of the reality singing competition show “The Masked Singer” had made anti-Semitic comments on his podcast for which he later apologized.

This call was different from others for several reasons, in part because Klein himself has been accused of making bigoted comments, including about Black people.

“Cube told me he supports condemning Black&all antisemitism& I condemned all racism,” he wrote in a tweet describing the conversation.

The pair also did not share a recording, as others have done. But Ice Cube acknowledged the conversation in a tweet Tuesday in which he praised Klein for his advocacy.

Shout out to Mort Klein who had the courage to seek the truth and speak with me and see for himself I am obviously NOT an anti-Semite or racist. I admire him for the advocacy of his people and look forward to talking more on how Black and Jewish communities can work together… https://t.co/dnVijJkR8q

Going into the call, Klein did not know the extent of Ice Cube’s support for Farrakhan, including in some recent tweets.

Told late Monday about a Twitter exchange last month in which the rapper told Jake Tapper to “watch your mouth” after the CNN anchor tweeted about Farrakhan’s propensity for hate speech, Klein said he would ask Ice Cube about it.

“That’s troubling,” Klein said. “Please send that to me, I’m not aware of this.”

On the earlier call, Klein said, the two discussed Farrakhan in broad terms in addition to criticism the rapper has faced for tweeting other anti-Semitic messages and images. In June, the rapper tweeted a picture of a mural showing a group of white men with large noses sitting around a card table held up by Black men. The mural was removed after critics accused the artist of depicting the men at the table with stereotypically anti-Semitic features. Klein said Ice Cube told him he hadn’t realized the mural was anti-Semitic.

“All he said is I’m not a Farrakhan follower and I don’t support any of this,” Klein said.

Klein said Ice Cube appreciated a story he told about how he had been a decent athlete in the Black neighborhood of his youth, but when he moved to a white Jewish neighborhood he became an “outstanding” one.

Klein said he told Ice Cube about the “horrible” Black Lives Matter platform, referring to the 2016 platform by the Movement for Black Lives, an activist group represents some groups but not the entire Black Lives Matter movement. Some Jewish groups have described the platform as anti-Semitic for accusing Israel of genocide and apartheid. Klein said Ice Cube had agreed that the platform was “terrible,” though the rapper has repeatedly tweeted his support for the movement.

While the rapper’s long affinity for Farrakhan disturbed Klein, he said he believes Ice Cube is sincere in his condemnation of anti-Semitism. He even told Klein that he supports the right of Israel to exist as a Jewish state, which excited the right-wing Zionist.

“He’s not everything I would want him to be,” Klein said. “But he’s moving in that direction.”